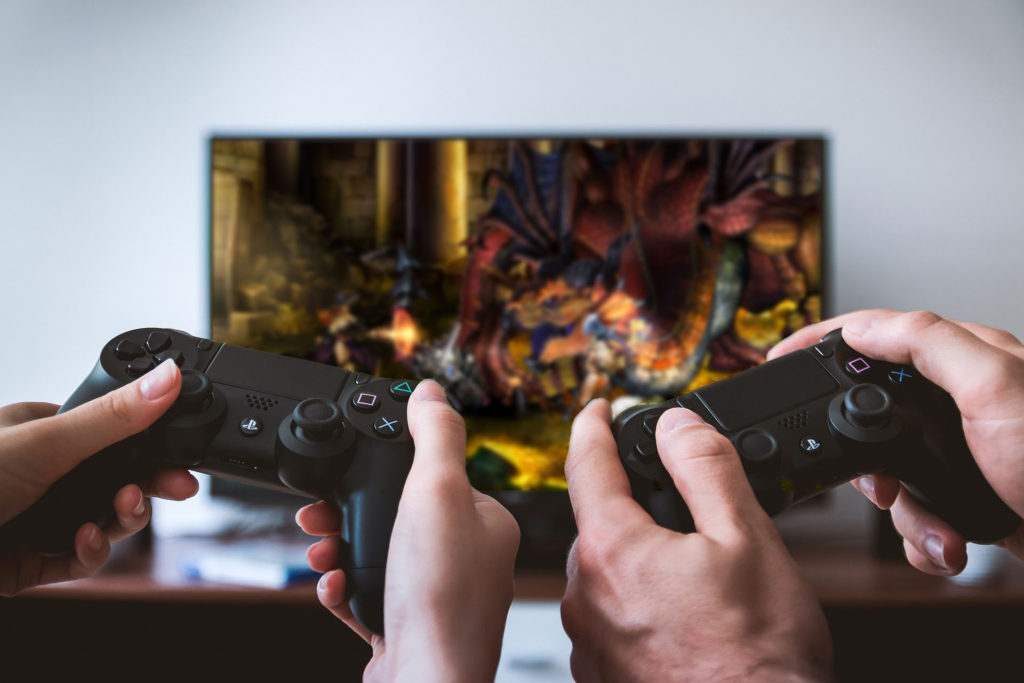 Valentine’s Day is approaching. Time to romance your sweetheart with flowers, a nice lobster dinner, and the undented box of wine. Light some candles, watch Titanic and dry each other’s tears as you vow that you will always check for a pulse before shoving them into the depths of the ocean.

Then again, flowers die, Titanic gets a little cheesier with each viewing and some people are allergic to lobster. I know this and now my husband knows this, because I once accidentally poisoned him with a homemade lobster dinner that left him with a closed up throat, gasping for air. Live and learn. Thankfully in this instance he did both.

Valentine’s Day can be like New Year’s Eve for couples. There’s a lot of pressure put on it, you have to dress up, the prices on everything skyrocket and everyone ends up disappointed. Though you could go the non-traditional route and try a couch co-op video game.

There’s the tired old cliche in Hollywood of the man-child playing his shoot ‘em up video games while his spouse nags at him to help with the dishes. You never see the man snapping at the women to knock off playing Zelda for ten minutes and take out the trash. My husband and I have lived together over ten years, we cook together, we both clean and take out the trash. I fix the garbage disposal when its jammed and can sew a button on a shirt or fix a seam. He kills date bugs and traps wayward lizards despite what hour I wake him. We have always been very cooperative in our cohabitation. Except when it came to gaming.

We’re both fans of gaming but in different ways. I was a step or three behind in the video game technology, because during my adolescence my parents were preoccupied with paying the rent and feeding us, and not so much with buying us a PlayStation. Or even a Nintendo 64.  So my sister and I made due with hand-me-down Sega and SNES consoles. I felt no hardship, as the games on those were great! I consider Super Mario World to be one of the most perfect games of all time. Sim City, Mario Kart, Street Fighter II, Sonic the Hedgehog, Mortal Kombat (with the cheat code for blood), hell even Aladdin was awesome. There were some duds (I’m looking at you, Pink Panther goes to Hollywood), but there’s a reason my husband bribed a FedEx driver to tip him off on SNES Classic delivery at GameStop for my birthday.

He, on the other hand, has always been an avid gamer. He loaned me his Playstation when we first started dating and tried to get me into Silent Hill, but the postage stamp-sized TV I owned at the time made it impossible to do anything other than stumble blindly through alleys, slamming into walls and patiently waiting to be mauled by nightmare dogs. Many evening’s plans were delayed as he played Elder Scrolls: Oblivion, claiming he had to get to a “Save Place” an invention that caused my brother to burst into laughter at nearly a year later, declaring him a genius and me an idiot for buying it.

So there we were. I liked video games, but didn’t have the experience to play the games he liked. Moreover, most of the games he liked were one player and most of the games I liked, the 2D side-scrollers, were less common as game systems like N64 and Playstation moved more toward 3D open worlds. Gaming separated us. He had his Dark Souls and Bloodbourne. I had my Mario and Zelda on my 3DS, a reminder of my lost youth spent working in the coal mines. Until one cold night he came home, Gamestop bag waving triumphantly above his head. After much research he had found the perfect game. Dragon’s Crown.

Dragon’s Crown is a perfect mix of the new and the old. There was the side-scrolling element that was familiar to the type of games that I liked, yet had the elements of an RPG that my husband liked. He had already gotten me into Castlevania: Symphony of the Night (a game I heartily enjoy and have completed several times. I was in the Upside Down before it was even cool.)  We had whiled away more than a few afternoons playing the indie game Trine. In Dragon’s Crown I played the burly knight with the impossibly narrow waist, smashing and bashing to protect my husband’s wizard, casting spells and activating rune stones. It was fun, it was stress relieving after a long day when bosses nagged and bills loomed. To be in this completely separate world where the most pressing discussion was the strategy of storming a goblin gate and armor upgrades was a sweet escape. When you got $1.25 in the bank it’s nice to know that in at least in one universe you have $6000 in filthy lucre.  On a side note, no, Dominos does not accept video game gold as payment, and the delivery driver will get very mad when you suggest this. 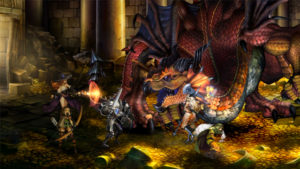 After Dragon’s Crown, there was the extent of the Wii’s purpose, New Super Mario Bros. It was a bright, fun co-op. We created our own lexicon, screaming at one another “Bubble!” , while shaking the controllers like actors in As Seen on TV exercise equipment infommercial. We invented new curse words that would make a sailor blush. My husband once got so frustrated with me, he purposely picked my character up and threw it into a canyon of bullets. I would have been less betrayed if I found out he had a secret family in Wichita. It was great.

After that we struggled to find other quality co-op games. There was Diablo III, but it was a rather repetitive game. There was brief nostalgic balm brought by the SNES Classic, we had Super Mario World and Contra and the most frustrating game this side of Pink Panther Goes to Hollywood; Donkey Kong Country. I know there’s ROMs but I’m not going to get into that. I don’t mess around with the devil.

We feared we would never again experience the magic of receiving a mid-day text about a battle hammer or a spell that wouldn’t be mentioned in a future trial. Resigned to our fate, we decided to turn our thoughts to boring stuff, like showing up at work and feeding the cat.

Then we learned of the announcement Dragon’s Crown Pro. May 2018. Sorry Mr. Jellybeans.

So this Valentine’s Day, you can drop a hundred bucks on dinner or you can pick up a co-op game, a box of Chinese food and decide who is going to be the wizard and who is going to hammer the hell out of the chimera. Just don’t throw your partner into a canyon of bullets.

And if you don’t want to spend your hard-earned lucre on a saccharine Hallmark card the crew over at Atlus are offering these super dope funky custom Dragon’s Crown valentines. To get yours click here. 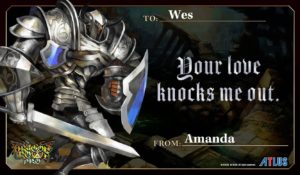 Is there a great couch co-op game you would recommend? Let Nerdbot know in the comments!