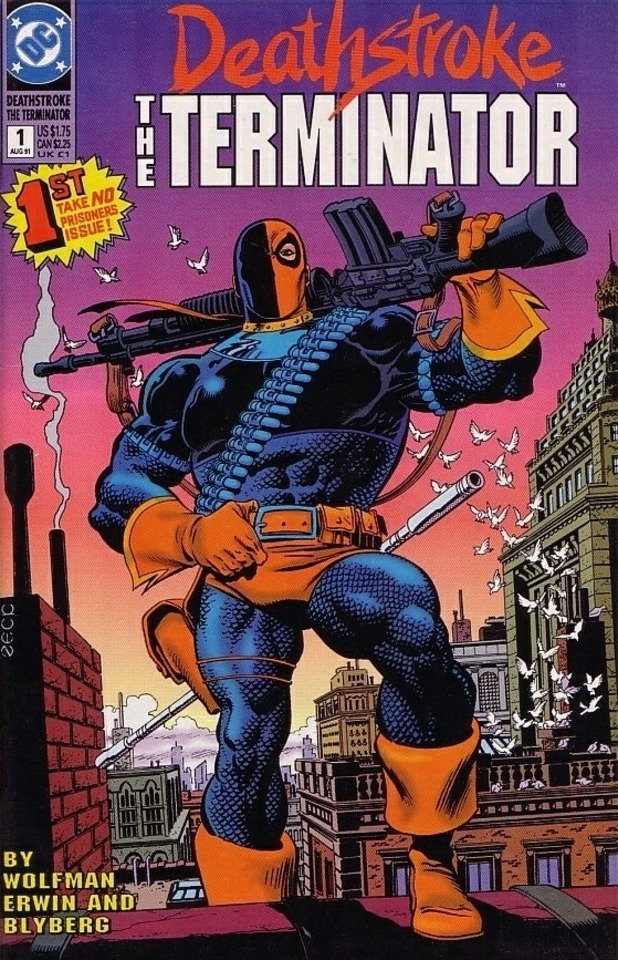 Joe Manganiello may have popped up as (SPOILER) Deathstroke at the end of Justice League, but we didn’t get a great look at his suit. Until now… Thanks Joe Manganiello’s Twitter! I could complain about the not-quite-bright enough orange… but, damn. He looks great! Who the hell is Deathstroke, though? And why should you care? Deathstroke, AKA Slade Wilson, is basically the best assassain in the DC Universe. He’s also sometimes a true megalomaniacal villain and rarely a hero. His origin is simple  Slade Wilson joined the army. He realized he was good at killing people. Then he took some experimental drugs that left him a super-human. Yup, his origin may be a grab bag of tired cliches, but he’s an undeniable badass.

Deathstroke started life in Teen Titans #2 back in 1980, and usually floats around the Teen Titans and Batman extended families. Robin/Nightwing are usually Deathstroke’s foil, and with good reason. Deathstroke is one of the few baddies as smart as Batman and Nightwing AND as physical.

Outside of comics, Deathstroke has shown up in the Teen Titans cartoon (as just Slade) and a ton of other animated projects. Deathstroke hangs out on the CW’s Arrowverse, played by Manu Bennett, and some… ugh… less quality. Let’s forget Lois and Clark. With an appearance in Justice League and a rumored spotlight in the Affleck solo Batman flick, will we see Deathstroke done right? Can a ne’er-do-well equal to the Batman make a splash? Can we see Deathstroke do a sexy dance in a convenience store? Sorry, had to make a Magic Mike joke. Joe Manganiello, luck bastard, may get to fight Spider-Man AND Batman.

Should Deathstroke get a solo film? Should he stick to being Slade on the Teen Titans? Let Nerdbot know in the comments!