Once a year, Blizzard brings together all the gamers and enthusiasts among their community with Blizzcon. Once again, this year Blizzcon was held at Anaheim Convention Center. Even with its newest expansions to the convention center it was still packed, with over 30,000 people attending this convention. For me, this was my first year attending and definitely not my last.  The community is much different then from the other conventions I have been to, everyone was so warm and welcoming. People coming from all over the world to hear about the big announcements to the games they love and to meet the people  they have  been playing games with over the years.

With this year, there was a plethora of announcements from some of Blizzards’s biggest games. Nerdbot is here to let you know all the biggest and most exciting news Blizzard had to announce. Take a seat and get cozy because its time to get glued to your gaming systems with these updates!

I’ll start off with the biggest announcement of BlizzCon, the newest expansion, Battle of Azeroth. This expansion comes with a level 120 cap, allied races and a battle between the Horde and Alliance. The Horde will now have a new area to explore, Zandalar and the Alliance gets, Kul Tiras. Both these areas contain 3 main regions.

The Leveling Improvements are as followed:

And not to forget, World of Warcraft: Classic, a new server option to let you relive the original experience of WoW. 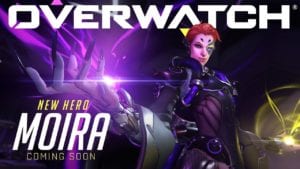 A new map will be coming to Overwatch, BlizzardWorld. This is a theme park based on all the studio’s biggest titles. This will be a hybrid map as well. This map is set to to go live early next year!

With a new map also comes a new character, a support character at that. Moira, was announced as a new support hero to join the Overwatch team. She will be a healer with a fade ability and she will also be able  to deal a surprising amount damage for a support character. For her origin story we learned she was once part of the Black Watch team and has a history with Talon.

Heroes of the Storm

Two heroes were announced to now be playable characters, Hanzo and Alexstrasza, with an amazing cinematic to go with that announcement.  Alexstrasza will be out November 14 and Hanzo will be out sometime early December.

2018 will have some new updates to roll out for Heroes, this will include performance-based matchmaking, voice chat and a solid rework of the stealth system.

Kobolds and Catacombs has been announced the next Hearthstone expansion. The expansion’s keyword is recruit. A new variety of cards was revealed with a cute pick-your-own adventure with the crowd on the Hearthstone stage.

There is also an all new single-player experience coming to Hearthstone as well called Dungeon Run. This will essentially see you leveling up unique cards and characters.

With nothing really new to announce for Starcraft II, we did get at least one thing…Starcraft II is becoming free-to-play. This will happen on November 14th along with a new co-op commander and missions for RTS.

What Blizzard announcement are you most excited for? Let Nerdbot know in the comments!