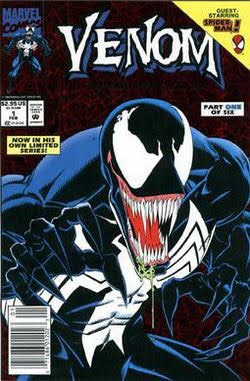 Let’s Talk About That Venom Movie

By Adam ChmielewskiOctober 31, 2017Updated:December 1, 20175 Mins Read
Share
Facebook Twitter Pinterest Reddit WhatsApp Email
Photo Credit- Marvel Comics
If you’ve been reading my stuff on Nerdbot, you will clearly know where I stand in the great Marvel vs DC debate.  However, from time to time I do venture outside the realms of Gotham City and Metropolis to the house that Stan Lee built and this week production began on one of my top-five comic characters ever, Venom.
I’ve always leaned toward DC, never been able to explain it.  But there was a period in my life when Spider-man comics were what drove my existence.  As a kid, he is by far Marvel’s most relatable hero.  He’s young, you’re young, the stories are something your parents find acceptable.  Then the Venom Lethal Protector series was released in 1993 and from the second I saw the famous cover of issue #1 I was hooked.  The image of the black alien costume with the big white spider on the chest should be put on a pedestal as an upper echelon of comic iconography.
Yes… I’m pretty excited about this.  On October 24th, The Independent unveiled a photo from the film’s Instagram account signifying the beginning of the movie making process.
Check it out below!! 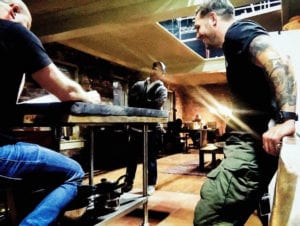 Look at Tom Hardy in all his tattooed British glory.  Realistically I think Tom Hardy could be cast as just about anything and I’m still holding out for the now most famous rumor in Game Of Thrones fandom which is him as a young Robert Baratheon in a prequel, but until that day arrives, I’ll still be a fan.  He’s like the perfect choice for Eddie Brock.  We already know Hardy can get jacked, just dye his hair blond, I feel the rest will take care of itself.
He’s got the range, resume, and overall persona to deliver a great performance in the whole “villains as protagonists” trend we’ve seen in recent years.  One can hope that when he is in full symbiote… his Venom voice sounds similar to his Bane voice.

The supporting cast on IMDb is rather short at the moment.  Michelle Williams and Jenny Slate are the only two female names to be featured.  I’m sure one will end up the love interest and the other an impact role to be featured in a few scenes.  Same with the dudes; Riz Ahmed, Reid Scott, and Scott Haze complete the list.  All of the online rumors point to Carnage as the antagonist but nothing is confirmed nor does IMDb give any indication of who will be who.  If they go the Carnage route, a story I think works better for the sequel (my opinion), I’d have to put money on Riz Ahmed.  He’s been on a little of a hot streak lately with The Night Of and Rogue One.  Plus he’s slightly less known than Hardy which should provide some balance of star power on the big screen. He can do the job, just let him.  In the coming days more information will hit the internet but if I was going to speculate… the direction this is heading appears to be the right one.

Zombieland’s Ruben Fleischer will be behind the camera, another great choice.  My concerns lie with the writing staff.  Jeff Pinker who wrote The Dark Tower and Kelly Marcel (50 Shades Of Gray) have been hired to work on the screenplay.  Believe me, I’m sure some people enjoyed those movies.  I guarantee they made a bunch of money, but if you’re looking for critical acclaim you’ll need a magnifying glass.  Now I all in favor of second chances but my skepticism probably won’t go away until I see the finished product.  I do wish them the best.
Now… what do we really want?
Not to see any resemblance to what we saw in Spider-man 3.  God they really messed that one up didn’t they.  Topher Grace? You’ve got to be kidding me.  He was good on That 70’s Show but as Venom? Hell no.  The whole thing reeks of some major Hollywood agenting deriving from an actor who was under the misguided impression he was as marketable as Ashton Kutcher.   Didn’t you feel like he didn’t belong there? Then he started talking and it was all downhill.  Remember when the final showdown was happening at the end of Spider-man 3? We’re watching Spidey on the verge of defeat and Grace delivers a line summarizing the fire that drives his evil ways.  “I just like being bad.” Punch me, please. 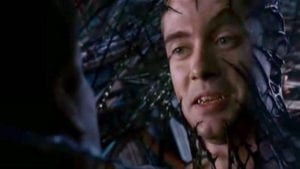 Photo Credit- Sony
No, don’t do anything that would remind us of the horror known as Spider-man 3.  It’s been years and I have yet to meet anyone who has a positive review of it.  But, the past is behind us, superhero movies have come a long way since then.  I don’t think Marvel wants to strike out so I’ll bet they force everyone to watch Spider-man 3 and write reports on what not to do.  I’d call that progress.
I’m staying positive and on October 5th 2018, we will know.
By Adam Chmielewski
@PolishKaiju