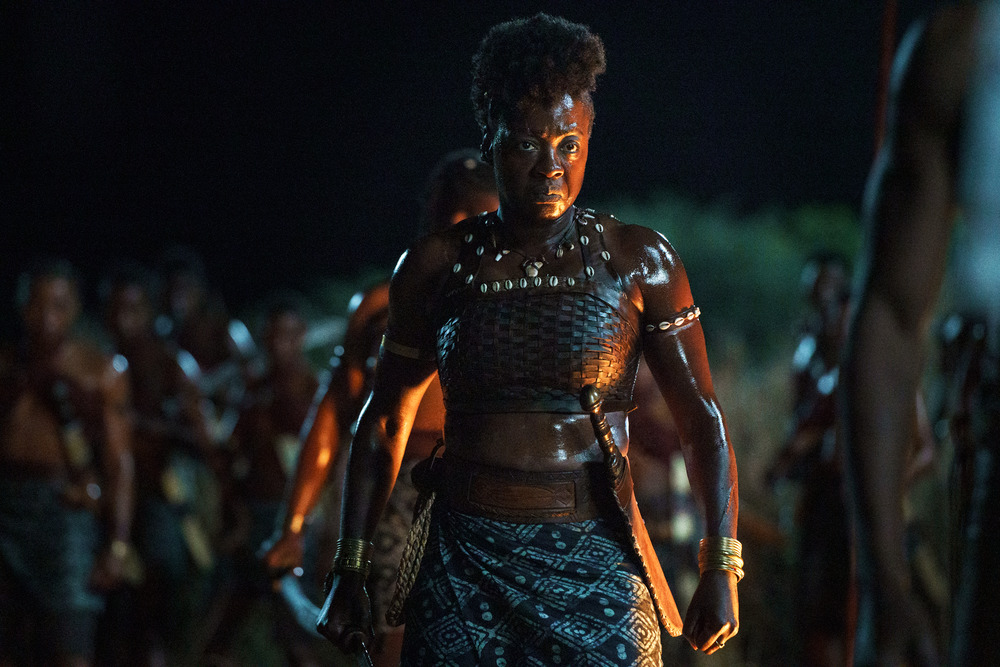 Let’s just get this out of the way right of the gate so we can talk about “The Woman King” unencumbered by the elephant in the room: I am not, nor have I ever been a historian. I enjoy history, and I’m always game for a good old fashioned documentary. But my job as a film critic is to review movies based on their quality and function as entertainment, and not get wrapped up in the minutia of historical revisions. If we held every single film that boasted “based on true events” to the standards of accuracy, we’d be left with nothing at all. Some (if not all) of the most acclaimed films in cinema that use historical events as the basis for their film can be ripped to shreds with a brief google search. So while I am acutely aware that most of “The Woman King” plays fast and loose with much of what actually occurred, that is not (nor has it ever been) the purpose of film criticism, and even more so of filmmaking. Movies are first and foremost, entertainment. So this will be the only acknowledgment of fact vs fiction as it pertains to “The Woman King.” There are plenty of articles and documentaries written by far more qualified people than myself that will gladly indulge you in your “Well, actually” discourse. But that will not be here.

“The Woman King” is quite possibly one of the best films I’ve seen this year.

Expertly executed and performed, it is an immersive cinematic experience unlike anything you’ve seen, and yet somehow feels right at home as a pure homage to old epic action films of the early 2000s. “The Woman King” grips ahold of you from the moment it begins and never, ever lets go. It is a dazzling war epic that contains “Black Panther” level celebration of black excellence and invokes the warrior spirit inside us all. It may just be a masterpiece, packing emotion, heart, and brutal violence all into one magnificent piece of cinema. Even when the film starts to feel a little too cliche for its own good, it’s all done and performed so well they actually end up making the film more rousing and thrilling than off putting. Its predictability actually allows for this film to give us a sense of familiarity in a foreign land, and combines both the old and the new into one unforgettable movie going experience.

Directed by Gina Prince-Bythewood (“Love & Basketball“) and written by Dana Stevens (“City of Angels,” “Safe Haven“), “The Woman King” stars Viola Davis as Nanisca, the general of the all female warriors called the Agolie, who were defenders of the Dahomey kingdom. The film takes place in 1823 at the height of the West African slave trade, and an impending war with the vastly larger Oyo Empire. We are transported into the kingdom of the Dahomey, and follow a young warrior desperate to prove herself, as well as Nanisca wrestling with her own demons that may conflict with her duties as a general and servant to her king and country. As the war nears ever closer, everything and everyone will be put to the test, and our hero warriors will have to come together to show the world around them who the Dahomey Amazons truly are.

If that synopsis sounds familiar, it’s because much of “The Woman King” is actually pretty safe and run of the mill narratively. The young defiant girl who wants to be a warrior, the tormented leader in constant emotional conflict and a dark past, a training montage, a love story, and yes, good old fashioned revenge. When you start to take the film apart beat by beat, “The Woman King” isn’t much more than the sum of its parts, packed with cliche melodrama and tired old action tropes. But absolutely NONE of that matters, because the film is just so goddamn good and well made that all of those things we’ve seen a thousand times feel exactly like what we need right now. “The Woman King” is so captivating and enthralling that you actually relish in the familiar, and the world building is so fascinating I never wanted to leave it even after 2 and half hours of run time. Prince-Bythewood is an expert behind the camera, delivering a visual masterpiece that thrives in all the things that often hold these kinds of films back from greatness.

It is also elevated by unparalleled performances from pretty much every single person on screen. There is not a single weak link here, and every single one of these incredible women are giving everything they have to every single moment they are given. Viola Davis delivers a career best, which is saying a lot considering everything she touches turns to Oscars. While she’s firing on all cylinders and some new gears we didn’t know she had (she is physically imposing and powerful, showing her dedication to the training and stunt work) it’s the supporting cast that really seal the deal. “The Woman King” is proof that the MCU and even “No Time to Die” wasted the immense talents of Lashana Lynch. She steals every single scene she’s in, and is downright impeccable and charming and captivating at every turn. For the love of god, give Lynch more room to shine and show her true self, because “The Woman King” is a stark reminder that we haven’t even scratched the surface of what she’s capable of delivering.

Shelia Atim and Thuso Mbedu are equally incredible, invoking unfathomable emotion and purpose from their respective roles. Mbedu is particularly wonderful as well, being the youngest actor among the veterans and strongly telling the world that she belongs here among the greats. Everyone disappears into the world and characters, becoming almost unrecognizable in the best way possible. You truly forget you’re watching Viola Davis; you watching “The Woman King” and following the people that make up the story being told. Even John Boyega as King Ghezo brings some of his best here despite not having much to do outside of being a plot device for narrative purposes.

“The Woman King” belongs among the likes of “The Last of the Mohicans,” “Braveheart,” and “Gladiator.” Yes, it is that grand in scale and that epic in scope. And yes, it is that well made that it stakes its claim to be among the best epics cinema has to offer. Even if all the melodrama and cliches are harder to get over than they are for me, “The Woman King” is just brutal and intriguing enough to have one hell of a good time at the movies. It just wildly entertaining on all levels, from its action to its world building to its character development. I was expecting to enjoy it, but I was not expected to be this blown away but it.

“The Woman King” is everything epic action movies are made of, and makes a strong case to be one of the best films of 2022. I cannot stress this enough: go see “The Woman King.” My own sensibilities won’t allow me to give it a perfect score, but this is going to get about as close as any film ever has this year to one.

Yes, it is THAT good.

“The Woman King” is playing in theaters now. You can watch the trailer below.