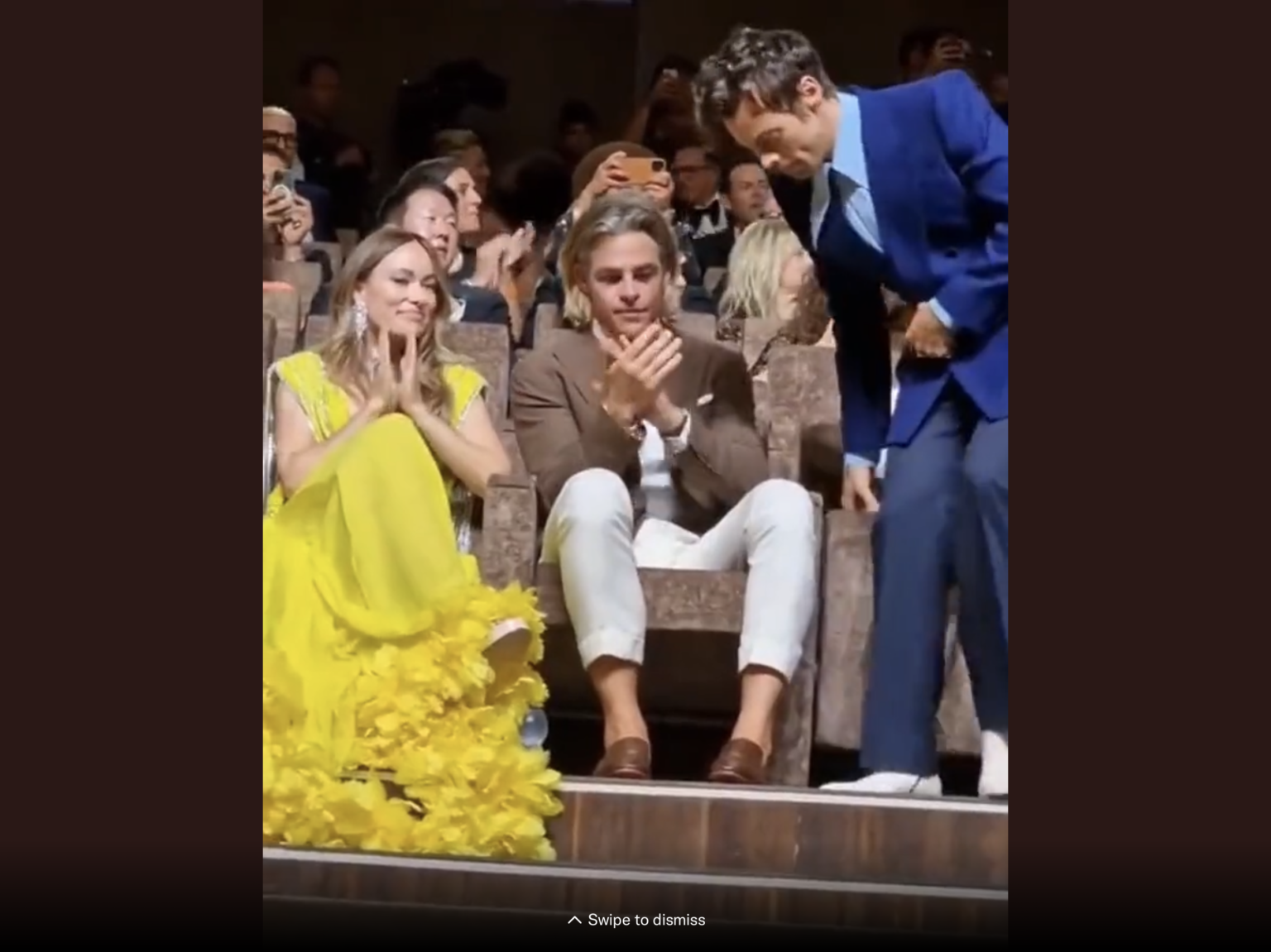 To say “Don’t Worry Darling” has been mired in controversy prior to its release is an understatement. Unfounded rumors of a ‘toxic set,’ director Olivia Wilde and star Shia Lebeouf in a public battle of he said she said, lead actress Florence Pugh seemingly refusing to do press, as well as custody papers served to the Wilde on stage during CinemaCon. On top of all of that, early reviews have been mixed; most critics praise the performances of Chris Pine and Pugh, but find the overall film and narrative uninspiring and rather messy.

So, when a video surfaced from the premiere which seems to show Harry Styles spitting on Pine, naturally everyone lost it, and assumed we’d be adding yet another controversy.

The video in question shows Pine sitting next to Wilde in a theater. Styles makes his entrance to applause, and as he leans in to take his seat, he hovers over Pine for a second and appears to spit in his lap. Pine seems to be stunned, and ends up just kind of laughing it off in disbelief that a man just spit on him. I’ve probably watched the video from multiple angles 20+ times, and I know plenty of internet sleuths would have spent even more time pouring over every single frame of the video. The clip has been viewed over 1.4 million times. Despite our best efforts to add another dramatic even to already dramatic film production, it turns out it was all just a big misunderstanding.

“This is a ridiculous story — a complete fabrication and the result of an odd online illusion that is clearly deceiving and allows for foolish speculation,” a rep for Pine told Variety. “Just to be clear, Harry Styles did not spit on Chris Pine. There is nothing but respect between these two men and any suggestion otherwise is a blatant attempt to create drama that simply does not exist.”

No reps for Styles have commented.

Some outlets have sought to validate the response from Pine, adding he seemed pretty spacey the whole screening, and appeared to be looking for his glasses only to realize they’re in his lap and laughing at himself. This probably seems to be the more logical explanation, though not as glamorous as two famous people spitting on each other at a prestigious film festival. Though the internet has always been one to pour gasoline on sparks to create wild fires, the existing rumors and controversies surrounding “Don’t Worry Darling” seem to have not helped the matter and most certainly fueled the misinterpretation of the incident.

So there you have it. The boys are alright. Don’t worry, darling. Everything is fine.

“Don’t Worry Darling” hits theaters September 23rd. You can watch the trailer below.