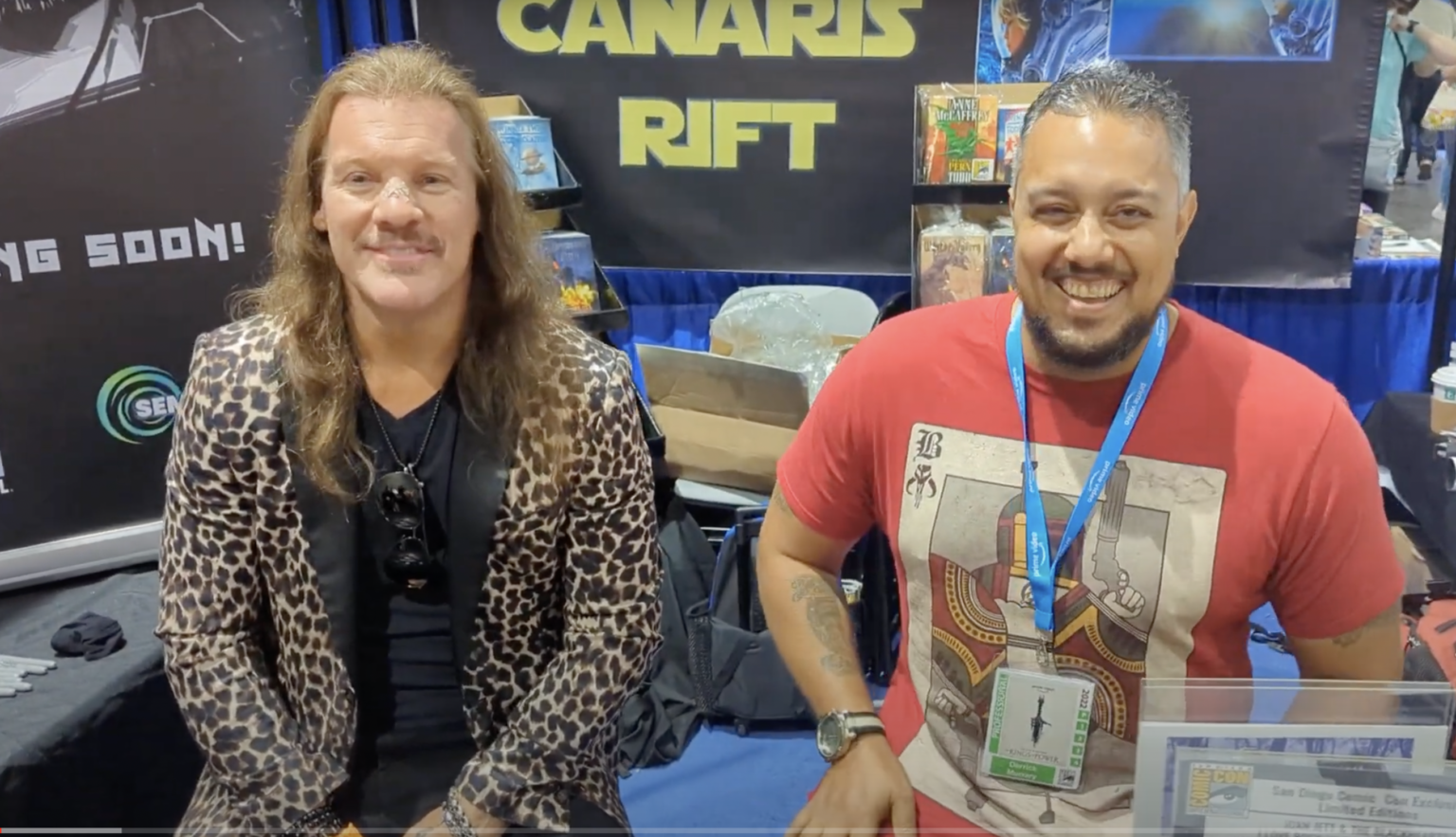 I’m not the biggest wrestling fan. In fact, I don’t think I’ve watched a minute of any pro-wresting in the last 10-15 years. However, when I was a young impressionable teenager during the attitude era, I couldn’t get enough of it. And that of course includes Mr. Y2J himself, Chris Jericho. So when I was given the chance to sit down with him for a few minutes to discuss his most recent project, I absolutely HAD to say yes!

Fresh off a recent match where he broke his nose, Jericho showed up at SDCC to promote his new graphic novel “The Painmaker,” the first ever NFT released comic. I asked him where he came up with the idea for this new anti hero:

“Well I mean, The Painmaker is a character I developed in Japan when I was wrestling there, I started realizing that the Chris Jericho from the states didn’t really translate the way I wanted it to there, and I thought I want something darker.  And I thought, what would serial killer look like if he was a pro wrestler?That’s kind of where the make up came from and the hat and the spiky jacket, I just liked kind of having this alter ego.  And so that’s kind of where it started”

“The Painmaker” is Jericho’s alter ego come to life on the pages of a graphic novel, and looks to be one helluva ride and a new take on the anti hero. Always one to push the limits of what we can do in the space, Jericho said,

“What if I take this to next step?  And I started thinking how many superheroes can we see with Batman and Superman and Spiderman, and somebody has to create a new superhero at some point, and I thought what about the Painmaker? What if he was the superhero I envisioned, but what if he was an intergalactic superhero, who reformed himself and dedicated the rest of his life to assassinating other intergalactic serial killers, that way you can make your serial killers look like anything…half spider half scorpion, a clown, a giant bat whatever it may be.And I thought but what if he still has the urge to kill innocent people, and DOES.  And that’s his flaw, he’s anti hero.”

If you know me, you know I love the dark takes on things and I absolutely love true crime, so a serial killer turned graphic novel anti-hero absolutely speaks to me! Jericho was also inspired by his work with Kevin Smith on the NFT film “Killroy was Here,” which is where he got the idea to release the graphic novel exclusively online and through the new type of currency that has taken hold of the internet. I still don’t understand NFTs, and Jericho didn’t really either, stating, “When they said Non Fungible Token I thought it was a mushroom, a fungus, I had no idea what this thing was!”

Glad to know I’m not the only one that didn’t fully understand the concept, but Jericho seems confident that this is where the future is heading, and believes that “The Painmaker” will be a new experience for everyone to feel deeply connected to the character. “Once The Painmaker is ready, we’ll be releasing it in chapters, the same as when you go to a comic book store you buy the issue every month.  Same thing with The Painmaker it’ll be a monthly kind of drop where you can your, I think it’ll be 68 pages per chapter of this moving living breathing graphic novel, which is what we can do with the NFTs.”

There’s a lot to look forward to, and “The Painmaker” is set to drop sometime this year. I also asked him about who his favorite wrestler of all time was, as well as his favorite comic book character of all time was. I am happy to report that it is, like me, Batman! Speaking to his answer, Chris said,

“I’m a big 70s Neil Adams batman character when he was really, once again very flawed anti-hero. And that’s another kind of an inspiration for Painmaker, kind of a Batman-esque type of vibe where we’re not really suppose to like this guy, but you do because he’s a real person so…The unfortunate thing is they very rarely have nailed it on film, but I really dug Robert Pattinson as batman, I was very surprised, I think Pattinson is top level to me with Christian Bale and Michael Keaton as the best batmen that has ever been on screen.”

If The Walls of Jericho backs the Bat, I think we have to agree that Pattinson is up there as the best! You can check out the full interview at SDCC below!