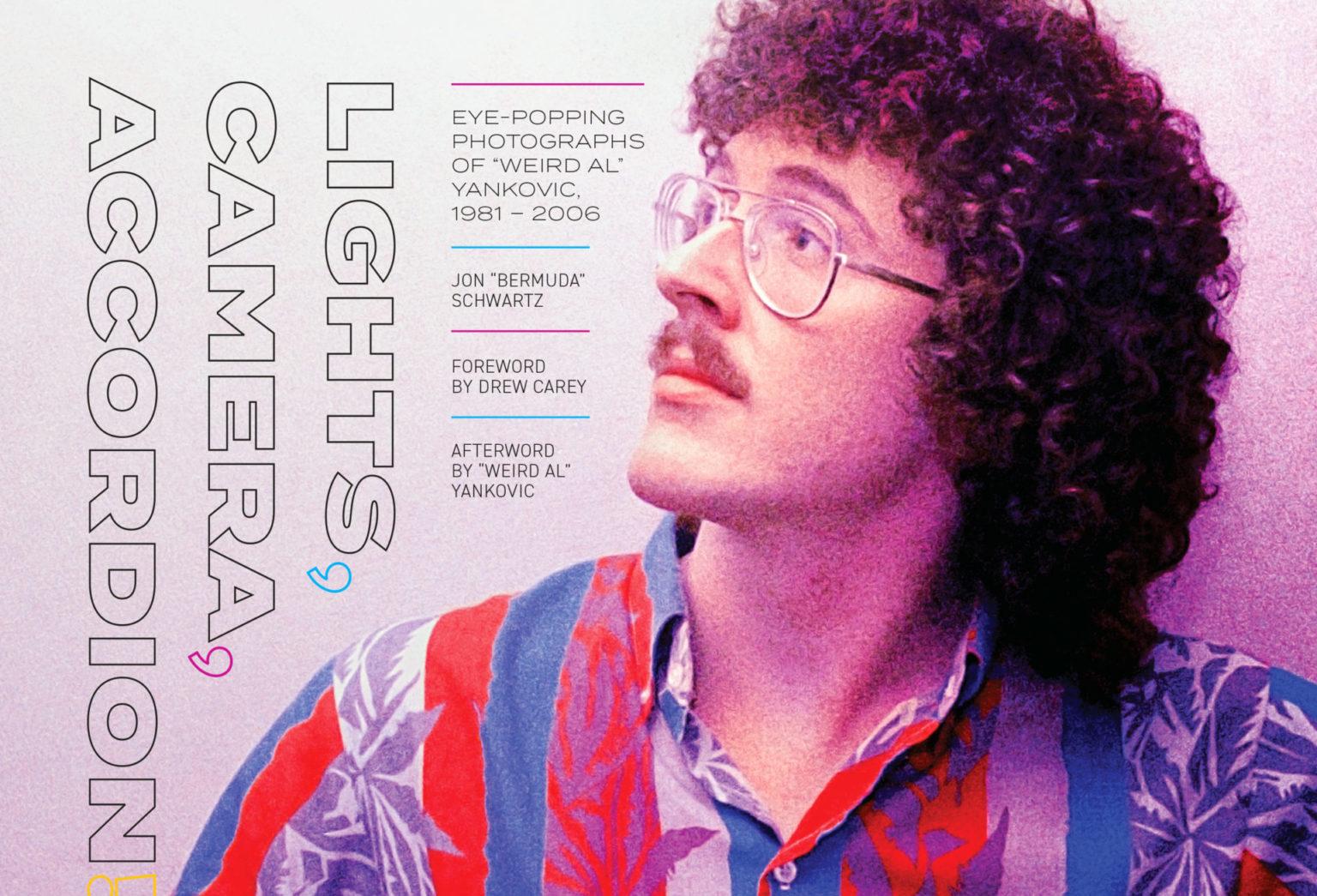 1984publishing.com announced that their new book called Lights, Camera, Accordion! will be coming out on November 15th of this year. It’s going to feature 300 color photos of Weird Al Yankovic along with many retrospectives about the musical comedian.

Each photo was hand selected by Al’s drummer and photographer John “Bermuda” Schwartz. These pictures are from Schwartz’ personal collection of 35mm color photography and have been restored from the original negatives. These are the best quality images of Weird Al that you can get! Schwartz has narrowed it down to just 300 of the 20,000 images he’s taken of Yankovic.

In the book you will get to see multiple behind the scenes shots from Al’s most loved music videos. “Like a Surgeon,” “Amish Paradise,” “Gump,” “Smells Like Nirvana” and the Star Wars parody “The Saga Begins,” will all be included. There will also be a good amount of studio session photos, tour bus craziness and even some more personal shots.

Lights, Camera, Accordion! is set to be the best photographic essay of Weird Al’s genius and crazy personality.

“It’s been another wonderful trip down memory lane for me, this time in living color,” says Schwartz. “We’re currently on a six-month, 125+ date tour and I’ve been sharing the book’s progress with Al and the band, and they’re as excited about it as I am! The fans have been very loyal to us for the last 40 years, and I know they’ll enjoy this book as much as I’ve enjoyed putting it together.”

“Wow wow! I’ve seen most of these pictures before, but it’s so nice to have them all in such good quality and in the same place… just a wonderful package,” comments Yankovic.

Drew Carey wrote the book’s foreword. “There are shots of Al in the studio. Eating pizza. Having fun with his friends. Recording the ‘Amish Paradise’ video. Performing ‘Like a Surgeon.’ When I first saw it, I thought ‘Wow. He looks like he’s having fun with his life.’ And because I know him just well enough to write the foreword to this book for free, I can tell you that he’s always like that. He IS the greatest,” says Carey, who guest-starred in Yankovic’s 1999 “It’s All About the Pentiums” music video.

Lights, Camera, Accordion! is a follow-up release to Schwartz’s popular black-and-white volume Black & White & Weird All Over, which focused on his use of black-and-white film in the first few years of Yankovic’s career. During that period, and until 2006, Schwartz mostly shot on 35mm color film, which is represented here.

Aside from the 256-page stand-alone hardbound volume, a limited edition deluxe boxed set featuring a copy of the book with alternative artwork and blue gilding, Bermuda’s signature, twelve 9”x12” prints, six postcards, a 35mm bookmark containing stills from the “Bob” music video, and other exclusive pieces of ephemera will be available on 1984Publishing.com. The box set is limited to 350 pieces and is priced at $99, while the book itself retails for $40. Pre-orders for the box set begin at 1 PM EST on Monday, August 1, 2022.

In other Weird Al News

There is currently a movie being worked on where Daniel Radcliffe plays Weird Al that is coming out exclusively on Roku this Fall.