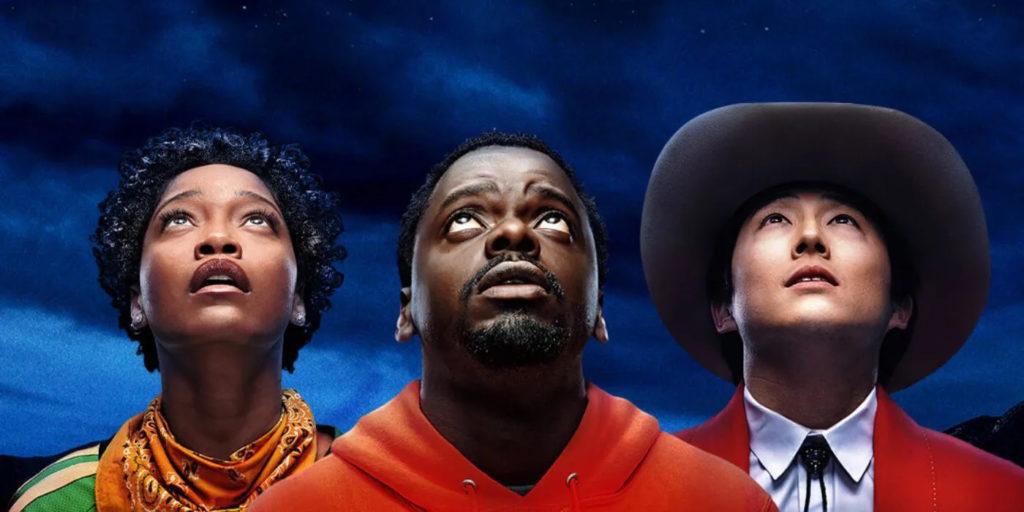 You really have to hand it to Jordan Peele.  The man has made a huge leap from sketch comedy to powerful filmmaker. One who is set on a visceral visual experience that will always leave you desperate to discuss it immediately after it.  He does this by tackling genres (thriller, horror, and now sci-fi) and not only subverting them but paying homage to everything that came before it.  That is most certainly what is happening in “Nope,” a subverted love letter to the sci-fi and creature feature genre. Borrowing from things like “Jaws” and “E.T” without ever feeling like he is trying to retread or remake them.

It is visually arresting and captivating, and serves as Peele’s most ambitious project to date.  With ambition often comes division, and “Nope” is sure to draw lines in the sand by the time the credits roll.  It is both marvelous and frustrating, jaw dropping yet undercooked, and purposeful but messy.  This film is a lot for any movie goer, and whether you find deep meaning in everything or find nothing more than a surface level summer blockbuster, you’re right.

Written and Directed by Peele (“Get Out,” “Us”), “Nope” follows two siblings OJ and Emerald Haywood (Daniel Kalulya and Keke Palmer) who own and operate a Hollywood horse trainer ranch in which horses are rented out to films and commercials.  Reeling from the sudden and somewhat unexplained death of their father, the pair have differing opinions about how to keep the ranch afloat.  Soon, strange phenomenon appear in the sky above them, and they both agree that the way to save their home is to capture it on film and get “The Oprah Shot.”  Of course, capturing a very fast, unpredictable and increasingly aggressive UFO (or is it?) turns out to be far more difficult and dangerous that they expected, even with the help of heartbroken Fry’s installation employee Angel (Brandon Perera) and old school cinematographer who stills films things on actual film Antlers Hoist (a welcomed returning Michael Wincott).

There is far too much to unpack in “Nope” without spoilers or getting too far out there with theories, so far now let’s just tap into what the film gets right.  For such an ambitious and divisive film, when it lands, it packs a wallop that floors you from start to almost finish.  Peele makes good on his theme and claims of delivering spectacle, because as much as it deals with this on thematic level, it is first and foremost the key to its success visually.  Peele is an unmatched visual storyteller, and masterfully captures the true heart of filmmaking as a medium with every single shot.  Combined with the stunning cinematography from Hoyte van Hoytema (“Her,” “Spectre,” “Dunkirk”) the level of skill to bring the vision to life is so breathtaking Peele quite literally shows you nothing more than a clear sky with some clouds and transforms it into one of the most intense experiences in cinema.  This is truly a visual spectacle, so good in that regard that I want Peele’s next film to be a black and white silent one, with nothing but visuals, score and soundtrack (which both unequivocally SLAP here).

Additionally, the performances are also top tier.  Particularly Kalulya and Palmer, who compliment each other beautifully in demeanor and performance.  OJ is a pensive, strong silent type who only speaks when it is absolutely necessary, and even then he is a man of few words.  Think old western hero archetype, another genre that “Nope” borrows heavily from.  This is juxtaposed by Palmer’s fast talking, clout chasing, loud personality, the exact opposite of her brother.  This is a breakout performance for Palmer, who injects so much charm into a somewhat unlikeable protagonist (on paper at least) that you can’t help but adore her every moment she’s onscreen chewing through scenery.  The pair are the backbone, and while Perera and Wincott are welcomed additions to the team of amateur UFO chasers, they are hindered by the undercooked subplots with which they are forced to operate in.  This mostly applies to Steven Yeun as well, who does the most with what he’s given which sadly isn’t a lot.  It’s a real shame too, because many of the themes stem from his character and story in ways that unfortunately never feel as connected as Peele intended.

And it’s here where “Nope” loses its footing, demonstrate some of the follies of ambition.  The cohesion of the film never quite comes together, feeling a lot like two movies crammed into one.  What’s frustrating is that both movies are interesting and could probably work as individual outings, but they don’t come together in any kind of satisfying way.  So you’re forced to choose which “Nope” you want to take and which one you want to leave behind.  The film seems to make clear which one it wants to invest in, but frankly you shouldn’t have to experience the film in this way.  There is so much tension and suspense and visual mastery that it almost makes up for it, but not entirely.  This is exacerbated by how the film continuously switches back and forth between the main story and lackluster subplots.

It is here in the confusion and half baked subplots that will be the dividing factor, where those who choose to relish in the wonder and spectacle of a visceral movie going experience will butt heads with those who simply can’t let the strangeness of the secondary stories get a pass.  Make no mistake, there is a lot to enjoy in here, and despite some narrative misgivings, it another home run for Peele.  Maybe not the out of the park slammer that “Get Out” was, but definitely off the back fence without being about to get the ball back to home fast enough.  And it isn’t on the first swing either; this is a home run on the third pitch seconds away from a strike out, finding its footing in the visuals and performances.  “Nope” shines, and shines brightest when its lighting the sky with mystery and intrigue.

Love him or hate him, Peele makes films you HAVE to talk about.  “Nope” is no exception.  No matter how you come away from your viewing experience, you will feel compelled to unpack it and discuss it with others.  It is almost impossible to go through this cinematic experience without talking about it afterwards.  And that is the power of true filmmaking, something that often times feels missing from the general audiences inundated with cookie cutter, copy and paste cinema.  We haven’t even scratched the surface of what’s actually in the film, and to his credit, Peele did an incredible job of keeping it all under wraps.  Even with an extended trailer that makes it seems as if you know what’s in store, I can assure you that you have no idea what’s actually coming.

How you come away from the film will be up to you.  But no matter what, as the film itself says, “What if I told you….that you will leave here…different.”

It makes good on its claim, because I will never look at clouds the same again.

“Nope” is now playing in theaters.  You can watch the trailer below.