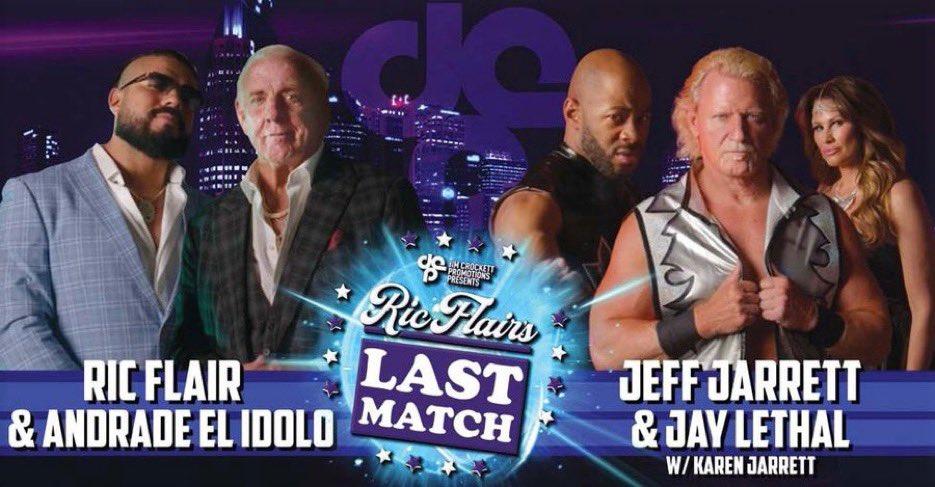 Ric Flair, who many consider the greatest professional wrestler of all-time, is going to have his last match ever later this month. This is all part of a “Jim Crockett Promotions Presents: Ric Flair’s Last Match” wrestling event. Up until now, Flair has not shared who his final opponent will be, but that’ll all change tonight, two hours before “WWE Raw.”

Flair will join his son-in-law, Andrade El Idolo, in a tag team match against Jeff Jarrett and Jay Lethal.

Originally, the plan was to have a tag match where Flair would team-up with Dax Harwood as they would face off against WWE Hall-of-Famer Ricky “The Steamboat” Dragon and legendary duo the Rock N Roll Express. Nobody is quite sure if the match will remain a singles match or a tag-team offset by other legendary wrestlers that have since retired as apparently the reason the match was changed at all was because Ricky “the Steamboat” Dragon was said to having too high an asking price. Speculation from “dirt sheet writers” like Dave Meltzer have added rumors that Flair himself may be suffering from a foot injury before the match has even begun, but those rumors have yet to be confirmed in any official capacity.

With training videos having hit the internet of Flair and wrestler Jay Lethal sparring in ring, people have also considered the possibility that Lethal may be a main part of the event. Most people will recall that Lethal had a “Whoo” off in a hilarious segment with Flair during “TNA Impact” on July of 2010. That history between the two has made them life-long friends over the years and it is possible that Lethal could make an appearance even if it is a bit cameo role.

Some fans might be confused by the event if they haven’t followed Ric’s career since the initial retirement match at “Wrestlemania 24.” Where he wrestled against Shawn Michael’s for one last time as a retirement match/farewell to WWE fans. Michael’s having lovingly whispered to Ric how much he “loved him” before delivering his finisher the “Sweet Chin Music.” Ric has since wrestled many dates since, but this is the official retirement match audiences have been waiting for. Expect things to get bloody on July 31st as pre-orders for the PPV have already gone up. Its time to say goodbye to one of the greatest wrestlers of all-time, the Nature Boy, Ric Flair.