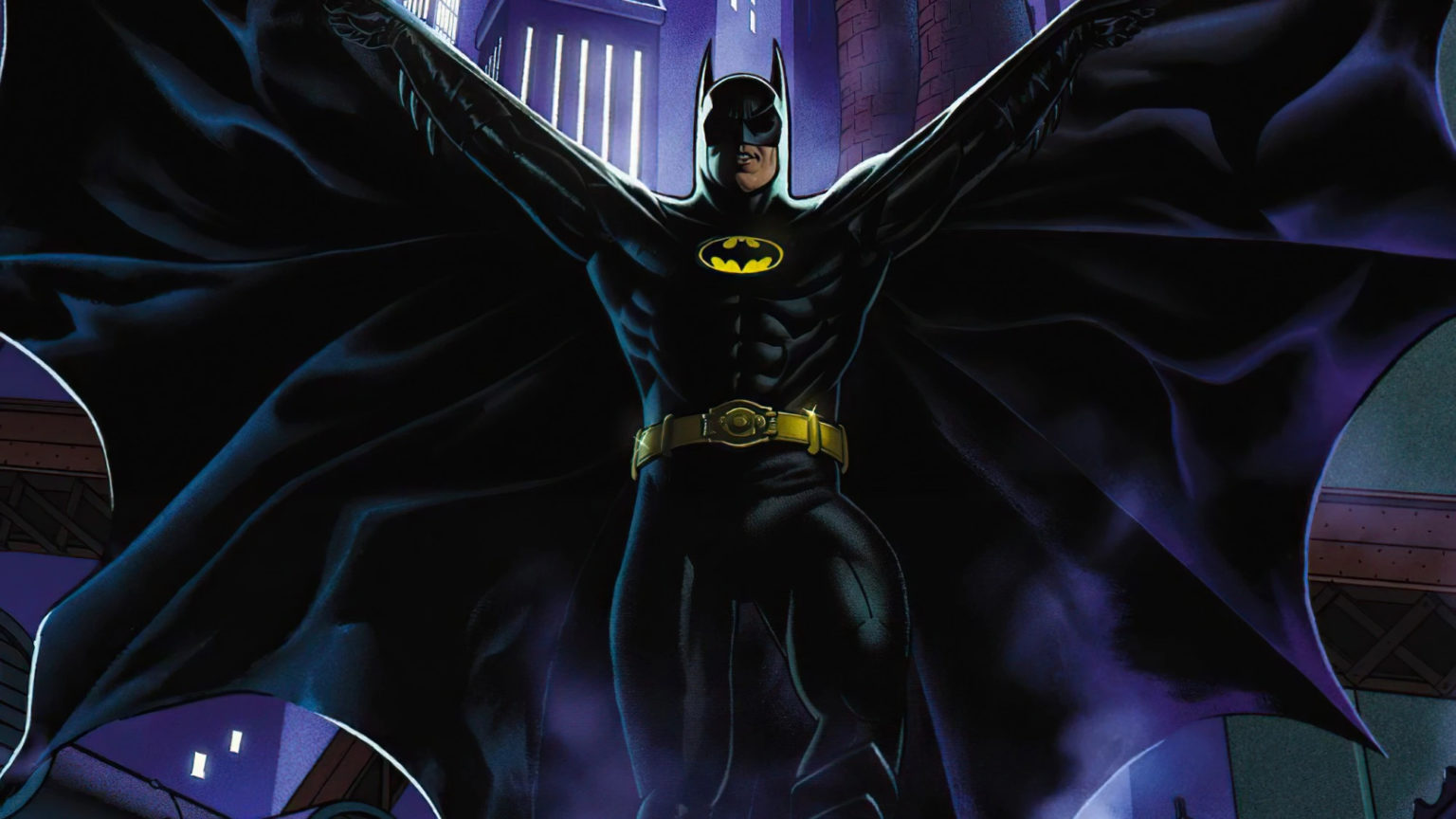 Tim Burton’s “Batman” 1989 has long since been heralded as one of the best superhero movies. It (along with Richard Donner’s “Superman“) is often credited as one of the movies that kick-started comic book characters in film.  Burton’s darker sequel, “Batman Returns,” still has a strong influence. But, the reception by toy companies and studio execs of “Returns” pushed Burton from doing a third Batman movie in the mid 90s. But when Sam Hamm, writer for both films, had the option to turn what was essentially the third story into a comic book-he jumped at the chance. Enter “Batman ’89.”

Personally, “Batman” (1989) is probably my favorite movie of all time. I had high expectations when this comic series, fittingly titled “Batman ‘89,” was announced back in 2021. Capturing Burton’s vision of Gotham City would be a tough act to follow if not carefully visualized. The artist working on the comic, Joe Quinones, originally pitched the idea to DC Comics in 2016 before Hamm was even involved. When they got together to discuss the comic’s plot, they both agreed Harvey Dent, by way of Billy Dee Williams’ portrayal, should be the main focus as Two-Face. For fans like myself, this is exactly what we wanted to see come to fruition.

Long discussed, there was a missed opportunity in not getting to see Williams’ play the iconic coin-flipping villain in a live-action movie. I was very pleased to finally get to experience that outcome and they sure did nail that aspect of the story. This Harvey Dent is constantly being split down the middle with his responsibilities as District Attorney while fighting to make changes that would save his personal upbringing in Gotham City. It was a fine way to showcase how he becomes attracted to the laws of chance.

It was also hinted that the Marlon Wayans version of Robin would make an appearance in the comic book along with Williams’ Two-Face. He takes the name of Batman’s third Robin of lore, Drake. Wayans was originally cast to appear in “Batman Returns,” but due to ‘too many characters’ taking the focus away from Batman- Wayans’ Robin was left on the cutting room floor. Funny enough, he still receives paychecks for the role today.

Having Harvey and Drake’s characters both come from Burnside- the “bad side” of Gotham- seemed like a logical move. The 90s was a decade of discussion about gang violence, neighborhood poverty, and the war on drugs. It felt appropriate to see these concepts of our real world history coming into play for the roles of these two characters. It is in fact, the main point of the story as Harvey is trying to fight for his neighborhood, but is at odds with vigilante Batman and Commissioner Gordon who helps tip off Bruce in secret when he can. The dynamics of the three forcing each other to fight the way they do in this comic book is perfection. It seems like the political aspects are battling the streets here and I loved the execution of it.

Harvey even goes as far as calling in the National Guard to patrol the city. Seeing this added pressure put onto an older, grey-haired Batman, had me on the edge of my seat. It rightly makes sense why he would want to count on a partner joining his ranks as a crime fighter. Drake has only done minor bouts as a costumed hero to protect his neighborhood but also uses detective work to deduce that Bruce is Batman. It makes for a formula that’s required to believe these two could come together as a team.

Their first job is actually out of costume, when they pull Harvey from a burning building. This is how his face becomes scarred. While this is different than his origin in other adaptations, it’s still a close tie to how a villain becomes a villain in the Batman mythos. Someone is set into the position of trying to do the “right thing” and tragically it falls apart, only to make them become insane. So I felt at home when reading through this in issue # 3.

There are also minor callbacks to Max Shreck’s business and the Red Triangle Gang from “Batman Returns.” Bruce is using the ab machine he hangs upside down on in the first movie after seducing an intoxicated Vicki Vale. These are nice friendly reminders of what came before this comic book. Had they been in a full-fledged movie, I’m not so sure they would’ve worked as well. Catwoman and her cats make a return to let us know that she’s still alive and her’s and Bruce’s/Batman’s romance is still continuing. This is great because it reinforces that she did in fact survive the electric explosions at Penguin’s aquatic underground lair in the second film.

Having done the soundtrack to the original movie, Prince makes an appearance both as the split down the center half Joker/half Batman guise and also in his now eccentrically famous Batman skating gear photo op. It doesn’t stop there as the characters from nearly all of Tim Burton’s movies show up on Halloween night in the first issue of the series. So there is loads of nostalgia filling each page; as much as Quinones can fit in. In my opinion, it only works in this comic book aesthetic and I didn’t find it taking away from my reading experience. It maybe only enhanced it.

Speaking of Joe Quinones, his art does a superb job at trying to stay true to the gothic architecture that was inspired by the black and white films, “Metropolis” and “The Cabinet of Dr. Caligari.” Both share set designs that apply German expressionistic painting techniques used in “Batman” (1989). You can sense he’s studied the aesthetics and perfectly applied them to each panel he can use them in. I was filled with nostalgia as I flipped through the pages. This Gotham City was oozing the same character I’d come to know in the movie so well, that it made me appreciate the work and effort put into this endeavor. One that could have fallen apart at any moment.

Overall, I thoroughly enjoyed my time returning to Gotham 1989. There was no time to rest in the story. It keeps you engrossed in its narrative the entire read. Whether it’s the underlining messages about the woes of poor neighborhoods of the 90s that still persist today, or the responsibilities law enforcement is supposed to have in keeping us safe, I found myself loving the experience. I truly hope this won’t be the last story we see from this team. They’ve proven to this Bat-fan they can handle the job.

You can pick up all 6 issues at your local comic book shop, or via online retailers.