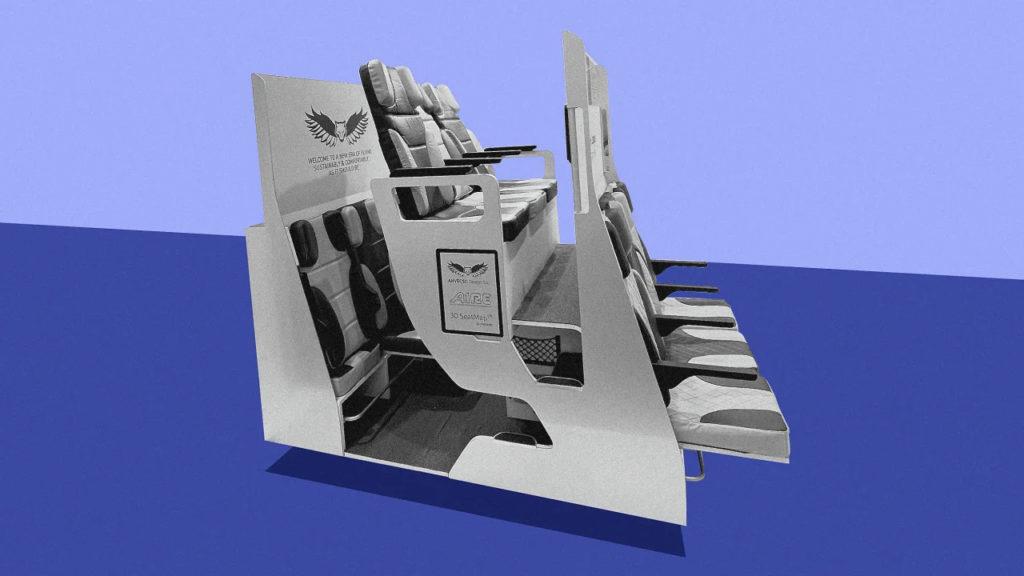 Without thinking too much about it, what’s the worst part of flying? Did you say “feeling like a sardine inhaling the smells of fellow passengers?” If so, also you’ll be thrilled about the new seating prototypes. Everyone else, strap in. It’s going to be a bumpy ride.

According to CNN, 21-year-old student Alejandro Núñez Vicente got fed up with the lack of leg room on commercial flights. To solve this problem, he proposed the Chaise Lounge Economy Seat Project. In Núñez Vicente’s proposed design, there would be a dual-level seat cabin, with each row alternating between on-floor seating, and seats elevated a few feet above ground.

It eliminates the overhead baggage compartment in favor of storing everything below the seats. A prototype was put together and tested at the Aircraft Interiors Expo, and is now being shopped around for various types of planes. “”I grow more from listening to the critics and listening to the bad comments, than from listening to the good comments and the flowers that they throw me,” Núñez Vicente told CNN.

In that vein, Mr. Núñez Vicente (as you are likely an avid reader of Nerdbot articles, like the rest of the cool kids), please take the following as growth opportunity.

AHHHHHH!!! Everything about this design sets off every mental alarm bell we have. First of all, the prototype seats are way more cramped than their original design. Even the CNN travel reporter, clearly doing her best to demonstrate the benefits of the design, looks wildly uncomfortable in the lower seats, desperate eyes and tight smile silently pleading for escape from a tightly meshed array of plastic and fiberglass.

[I’m having some trouble uploading the image from this article, but please, editors, do what you can, it’s so funny]

The lower seats are also unavoidably faced directly into the butts of the passengers in the higher seats. Planes do not offer the ideal sensory experience to begin with, but it’s hard to see how that can be improved by facing directly down the barrel of someone’s fart cannon. A fraction of additional leg room and a footrest hardly seem worth catching three hours of crop-dust, especially as more and more flights are foregoing mask requirements.

There are also practical concerns with which to contend. The middle seat, already a cramped experience for whichever unlucky soul ends up there, now looks to require a few advanced yoga techniques to access. One photo from CNN’s article implies that the aisle seat can be removed for easier access, but this seems impractical when boarding or mid-flight. Imagine that you’re at 30,000 feet and have to use the bathroom, or suddenly realize your seat mate is attempting to breastfeed a cat. To even stand up out of your seat you need to bend backwards and then shuffle past your other neighbors now extended legs.

Furthermore, it’s a simple fact that planes are becoming more crowded. Bob Seidel, CEO of Alerion Aviation and an experienced pilot, explains that one of the biggest contributing factors to this is a lack of pilots, something that doesn’t seem like it will change any time soon. Airlines will doubtlessly attempt to cram as many people as possible onto these planes, packing them in as tightly as possible. This raises the question of how people will be able to effectively store and access their carry-on luggage. Let’s say you managed to snag one of those elevated seats outside of the perpetual smog cloud that will inevitably form at face height for anyone who didn’t want to pay extra (and let’s not kid ourselves, the higher seats will definitely cost extra). If you want to access your luggage, you need to clamber over your seat mate, down a series of steps, and then bend all the way down to the ground to shuffle past other people’s bags to reach yours.

These are all concerns that have to be reckoned with before we even start to consider the 25.5 million Americans ages 5 and older who have self-reported travel-limiting disabilities, at least according to the Bureau of Transportation Statistics. Traveling with mobility issues is hard enough as it is, and these new seat designs are wildly inaccessible, especially if you prefer to stay out of Cabin Minus, or whatever other sanitized name corporate marketing will come up with for the Bog of Eternal Stench that will become someone’s travel reality.

Overall, everything about this new seat design seems horrifying. It’s represents a chance for airlines to try and squeeze even more money out of the customers they treat like cattle when they’re not beating them up. Personally, we’d rather take our chances with Mike Tyson.