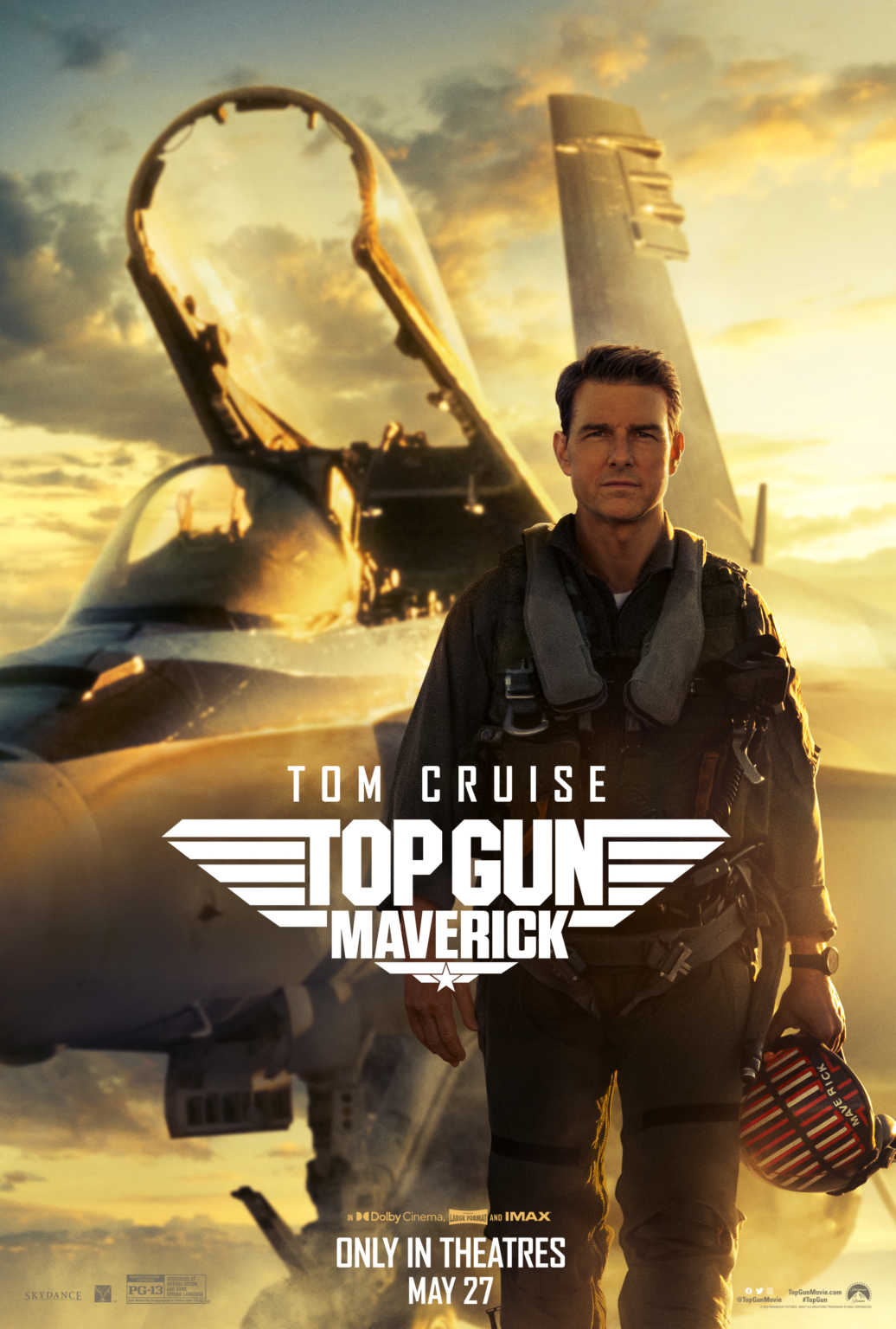 If you’re like me, you had a hard time believing that anyone would ever actually see a 30 year old sequel no one but Tom Cruise himself asked for. “Top Gun: Maverick” had been on the shelf for so long and had so many release date changes I started to think it was all a marketing ploy for scientology and not an actual film you would ever be able to experience in an actual theater. But low and behold, it DOES exist, and I have seen it in a theater on a real opening night the way it was always intended. And from opening homage to its predecessor to the award worthy cinematography to the reverence and respect of the narrative, “Top Gun: Maverick” delivers everything you’ve wanted in spades and proves to have been worth the weight.

Directed by Joseph Kosinski (“Tron: Legacy,” “Oblivion“) and written by Ehren Kruger (“Scream 3,” “Transformers: Extinction“), Eric Warren Singer (“American Hustle,” “Now You See Me 3“) and Cruise’s new personal screenwriter/director Christopher McQuarrie, “Top Gun Maverick” stars Tom Cruise reprising his role as Captain Pete “Maverick” Mitchell who, after once again pushing the limits of human feats in the sky against the orders of his superiors finds his way back to Top Gun. This time, he asked to teach a team new team of hot shots for a super secret and almost impossible mission (see what I did there?) with a clock counting down to launch. To complicate matters, one of those hotshots is Bradley “Rooster” Bradshaw (Miles Teller) who is (you guessed it) Goose’s son. Tensions flare, teamwork must be achieved, and the mission must be completed or catastrophe will ensue.

“Top Gun: Maverick” is very much The Cruise Awakens. It very closely follows the original “Top Gun” in terms of narrative composition, and classic beats but never feels forces or insulting. It is clear that everyone involved, from Kosinski to McQuarrie to Cruise, all hold the original in the same beloved status many of us do, and while it is a retread in just about every way, it never seeks to be some kind of nostalgic fueled, money grabbing insult. There is real care here, much like “The Force Awakens” and “Creed” which doesn’t necessarily seek to deviant too much from its origin but also works hard to make its case for continuing to return to the world. This kind of respect allows “Maverick” to truly deliver a sequel that is better than it ever should be, and one that furthers the story while purposefully embracing its origins.

There is far more that works here than doesn’t, so let’s get some of the misgivings out of the way so we get to what makes “Maverick” worth watching. For starters, the stakes are minimized right away and played for laughs instead of recognizing its detriment. I don’t think Cruise would ever allow anyone to write his death into any film ever, but “Maverick” makes it pretty clear early on that there will be no mystery as to whether or not Maverick survives. It’s not the kind of thing that derails the film, but it gets a little too close to “Mission Impossible” rather than differentiating itself from Cruise’s other mega franchise. It also a little distracting because the arial visuals are absolutely breathtaking, and removing the stakes diminishes some of that. Secondly, the squeezed in love story subplot feels even more forced and unnecessary than the original “Top Gun.” While Jennifer Connelly delivers a bit more organic chemistry with Cruise, it is just so unimportant in “Maverick” that it otherwise shouldn’t be there in the first place.

The last part that doesn’t quite work in the third act. Again, while visually stunning it feels transported from an earlier draft that does have any of its lead up fabric until we get to it. I’m not going to spoil it here, but it did leave me wanting. Not visually of course; that’s established to be the backbone of the films success. But there are themes that end with no payoff despite being pivotal to the story, and some character changes that truly feel like they weren’t actually apart of the final product. I found this particularly jarring with the relationship between Rooster and Maverick, who go from being at odds via unspoken and unresolved issues to buddy cop action comedy odd couple with little to no precursor that this would be where either character would end up. It’s not bad, just drastically different from what you would expect being invested in the first two acts. This in turn moves “Maverick” from the ‘let’s all come together as team during an impossible mission’ trope to ‘they were enemies and now they’re friends so let’s watch them humorously fight to survive together’ cliche.

That’s the bad, and even that’s not so bad it makes the film any less worth seeing. “Maverick” is a bonafide success, one that taps into everything you love about the original while utilizing the technology and superpowers of Scientology to deliver a truly immersive and stunning visual experience. If we’re being honest, “Top Gun” isn’t really that great of a film narratively speaking. “Maverick” seems to recognize that, and in its retelling of the same story ops to lean heavily on what it can do with practical effects and mind blowing arial combat. I can’t stress enough how jaw dropping the action is. “Maverick” is practically flawless when it comes to its dogfighting and arial action, with award winning cinematographer Claudio Miranda delivering some truly magnificent shots. Miranda’s eye for visuals paired with Cruise’s insistence on practical vs digital effects is a match made in Hollywood heaven.

Cruise once again proves he is a legitimate actor. Even when he’s not pushing the limits of human capabilities and testing his own mortality with crazier and crazier stunts, “Maverick” allows him to do more and remind us all that his is more than capable of leading a film on his chops alone. Likewise, his chemistry with Miles Teller feels genuine, with Teller trading in his dopey every boy looked for chiseled, chip on his shoulder Pornstar. But also proving that he has more to give than the roles he’s been in, and that we should expect quite a bit more from him in the future. And to that point, all of the new younger actors bring their a-game in “Maverick.” It’s rare that a retread sequel with a 30 year distance from its original has a younger cast worth caring about, and while not all of them get the same treatment they aren’t nearly as forgettable or nameless as they often are.

Make no mistake, “Maverick” is Tom Cruise first, everyone else second. But those secondary characters all feel necessary and purposeful to the overall story. Even the ones that don’t have much more than a moniker and a desk in the classroom, you still very much feel like the film relies on them to create the Maverick narrative. And then there’s the Val Kilmer return as Iceman, which isn’t a spoiler if you’re paying attention and if you aren’t, I guess…spoiler alert, Kilmer is in “Maverick” in a limited cameo. I bring this up at the risk of being lambasted for spoilers because the treatment of his inclusion is one of the better ones I’ve seen in film. Kilmer’s physical struggles have been well documented, and the hardships that have befallen such an incredible actor are treated with respect and care. “Maverick” goes out of its way to treat him properly, and uses technology and real life experience as a heartfelt advantage instead of outright exploitation. I can even admit to getting a little choked up during his cameo, which is testament to the respect he’s given in his appearance.

The overall conclusion is that “Top Gun Maverick” is more than worth the wait. It delivers on everything you could want from this kind of sequel, and sports some of the most enthralling action ever put to film. It is a visual masterpiece and a feast for the eyes, one that demands to be seen on the big screen and proves that Cruise was right to hold the film hostage until everyone could experience it the way it was intended. If for nothing else, “Maverick” is worth seeing on the biggest screen you can safely see it on for the thrilling visuals alone. It solidifies itself as one of the better sequels, and while I can’t make the argument that it’s better than say “Aliens” or “Terminator 2: Judgement Day,” but it does make a strong case to be in the same breath of some of the greats.

If you’re looking for a true summer blockbuster thrill ride that demands you return to the theater, this would be one I would say requires that trip.

Ride into the DANGER ZONE!!!!

“Top Gun Maverick” is currently playing in theaters. You can watch the trailer below.