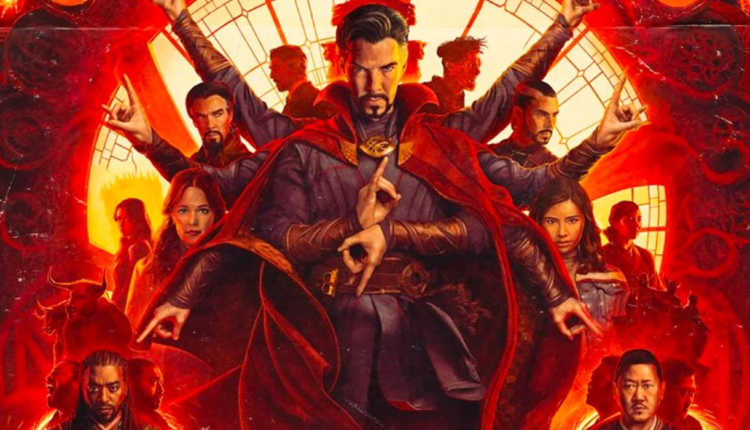 “Multiverse of Madness” is Classic Raimi, with a Budget [Review]

For the first time ever, Marvel Studios has delivered an entry that requires parental examination before you buy your family tickets. “Doctor Strange in the Multiverse of Madness” takes the established universe into places unknown, delivering a refreshing (albeit darker) tone. The limits are pushed here, which might disappoint fans hoping for the tried and true MCU formula. But, may end up delighting fans who have been desperate for something new. “Multiverse of Madness” is a far from perfect film, but absolutely resurrects director Sam Raimi’s horror style in expected and unexpected ways.

I’m not going to get into spoilers, but I am going to break from the norm of my reviews and tell you right away that I genuinely enjoyed the film.

“Multiverse of Madness” is a Raimi horror film first, an MCU entry second. It is an incredibly basic plot that follows the typical save the girl, save the world trope. But is expertly subversive in that is disguises its uninventive plot in a dark, violent, visually stunning package.

It is not for children unless you’ve let them watch Raimi horror, as it pushes the limits of what can be done within the confines of not just a PG-13 rating, but a viable, decades long marketing machine that rarely deviates from its “fun for the whole family” style.

I’ve never had to do this for any Marvel film, but you should absolutely screen “Multiverse of Madness” before taking your children. This is NOT “Thor: Ragnorok.” It is essentially Sam Raimi presents Doctor Strange Army of Drag Me to The Multiverse of Evil Dead.

James Hong FINALLY Gets Star on Hollywood Walk Of Fame

I can’t believe I just gave a Parental Advisory warning for an MCU film. What a time to be alive, eh? Anyway, now back to our regular scheduled review.

Directed by horror icon Raimi and written by Michael Waldron (“Loki“), the 28th entry into the MCU serves as a sequel to more than just 2016’s “Doctor Strange.” It is an origin story for a new character, a continuation of “WandaVision,” and a direct sequel to the 5 other Master of the Mystical Arts appearances. This really puts “Multiverse of Madness” in unknown territory. It has become so common to understand individual films as a small part of a larger story that we forget how often we used to have direct sequels. The reality is, Doctor Strange has already gone through all of his journeys that his own sequel should cover. We have already seen his origin story, his character growth story, his hero’s journey, his sacrifice play, AND his unlikely buddy cop story. Every arc has already been done, and Raimi seems to understand this. But this is also why so many people feel the film is rushed and missing things.

It is a challenging feat to create a sequel that doesn’t have those sequel tropes. What do we really need to learn about Doctor Strange that we don’t already know? We’ve seen him save the world on his own, save the world with a team, help others save the world, die and come back to life, so on and so on. So what does Raimi do? Well, he purposefully chooses to not waste time, by centering the actual narrative around the side characters Strange is forced to reckon with. This makes the Strange sequel more of an America Chavez (Xochiti Gomez) origin story and a “WandaVision“ season 2 more than “Doctor Strange 2.” That’s not to say he’s not the focal point; he is, but really “Multiverse of Madness” is a golden child narrative and not much else.

That can be off-putting for some expecting different things to be new, but Raimi is an expert in creating haunting and unsettling atmospheres. And because he’s given the ability to show this story as he sees fit, he’s able to create a much larger and more impactful story than what’s buried underneath the surface. He also is not shackled by any kind of reestablishment. He doesn’t need to spend any time catching people up or giving us the where are they now montage. “Multiverse of Madness” wastes no time thrusting you into a story you should already know, and while some may come away from that feeling like it insists upon itself, I would argue that after 28 of these things we really shouldn’t need anything spelled out for us.

Everyone is clearly on board here, with Benedict Cumberbatch becoming more and more comfortable in the role of Stephen Strange, delivering the appropriate trajectory of where he should be at this point effortlessly. Because it’s the multiverse, Belvavich Cumberbun (not a typo, I will misspell his name on purpose forever because it’s funny to me and never ever gets old) gets an opportunity to experiment with different versions of himself, something that not only showcases his varied abilities but also allows the character to expand in new ways unseen so far. Elizabeth Olsen as Wanda delivers a nuanced and tragic performance, proving once again that she is perhaps one of the best actresses out there. She too gets to play around a bit, and gets to portray some very new aspects of her character.

The most controversial and perhaps divisive performance and inclusion is Gomez as Chavez. She is without a doubt the main protagonist of the story, and as I said, “Multiverse of Madness” is really her origin story first. She is the catalyst of everything, both for heroes and villains here. I’m not going to pretend like I’m an expert on her character to make any sort of judgement on how she’s portrayed. I know of her, and know that her character is a vital part of the Young Avengers (which is clearly where the MCU is going). But outside of that, I don’t have any kind of ideal of what she should be, so I can only judge her on who she is here. And she’s great, serving as a solid sidekick to Strange as they travel through through universes. Gomez is someone easy to root for, and someone I can’t wait to see paired with Steinfeld and Pugh (yes, that’s probably coming).

It’s hard to really get into all the things I enjoyed about the film without revealing spoilers. But what I can say is that “Multiverse of Madness” solidifies thedirection of Phase 4 as risk and boundary pushing. The limit does not exist here, and the fact that Marvel Studios gave the greenlight to Raimi further demonstrates that this franchise isn’t done surprising us. Is that a let down for fans wanting more of the same? Sure, and you’re not wrong for wanting that, necessarily. Marvel Studios has spent the majority of its tenure making sure everything functions as a well oiled machined with little to no variance. Only recently have they been willing to let go and play around in some unfamiliar territory.

This is the strength of “Multiverse of Madness” for me. The leanness of the story serves as a refreshing, non-pandering take. It is more furthering of the complex storytelling and darker tones from the recent entries than another fun romp with an Avenger. Hell, even when Raimi is forced to give fans some much anticipated cameos, he’s very quick to make sure they are not the only thing you’re here for.

In fact, Raimi seems set on daring you to believe Marvel Studios is all about fan service. There is a whole sequence at the end of the second act that feels as if Raimi is looking at the audience and saying “There. You happy? Good. Now here’s what I think of your ideas. Sit back, shut up, and let us do our jobs.”

To some fans, this was seen as an arrogant insult to their loyalty. To me, that is how you double down on taking risks, and I am completely on board for this batshit train ride. Marvel Studios has literally reinvented the way we watch and understand cinema, for better or for worse. “Multiverse of Madness” most certainly delivers on that, and while it packs a lot into a little, I still came away feeling like I want more of whatever it is they’re doing. And if the mid credit scene is any indication, they aren’t even close to being done with what they want to do and where they want to go.

Is “Multiverse of Madness” the best entry to date? No. But I think it works best if we all recognize the franchise is reinventing itself. That’s not going to be easy and not going to be for everyone, especially those that want the comfort of earlier phases. It is a daring film, more horror than superhero. The plot is as basic as it gets, but the performances are solid, the horror is engaging and downright haunting, some of the visuals are absolutely stunning, and the overall pieces of the larger puzzle helps us understand that we are once again heading into the unknown.

I really enjoyed “Multiverse of Madness.” If this is where the MCU wants to go, then sign me up.

And no, Marvel Studios did NOT pay me to write a good review. I assure you, my lifestyle would be vastly different if I was getting that Disney money, and you would know. Oh boy, would you know. I can’t even tell you what it would be, but there would be signs. I hate that I have to write this, but I know damn well someone is gonna come after me for liking this movie. If you know where I can get a Marvel Studios check, DM me. I could use the money.

Otherwise, I hope you enjoy “Multiverse of Madness” as much as I did. It’s weird, strange (see what I did there) movie. And while it doesn’t reinvent the wheel or stand out as the best of the MCU, it’s good enough to see, taking bold steps in new directions that I’m keen to follow.

In the great words of Dave Chappelle, “BETTER NOT BRING YO KIDS!”

“Doctor Strange in the Multiverse of Madness” is now playing in theaters. You can watch the trailer below.

“Multiverse of Madness” is Classic Raimi, with a Budget [Review]

Derrick Murray May 10, 2022
"Doctor Strange in the Multiverse of Madness" is a Sam Raimi horror film first, an MCU entry second, and that's ok.
Movies & TV

Did You Know Arby’s Sells a Jamocha Shake Bath Bomb?

Prev Next 1 of 2,643
Get the Latest News
Latest Videos
More Stories