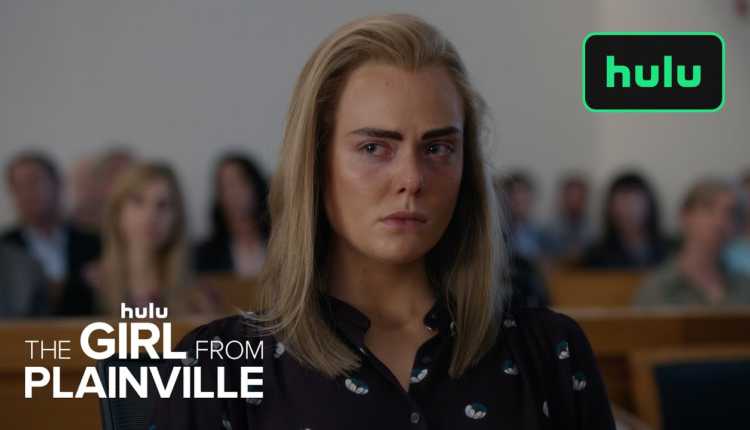 When Texting Goes Wrong: “The Girl From Plainville” [Review]

We’re all aware of the dangers of social media and the way we currently communicate with each other. We’ve seen these dangers manifest in a number of ways, from large scale global effects to the smaller and often tragic cases like the one in “The Girl From Plainville.” The highly publicized case had dramatic implications and set some precedents in regards to the power of texting, mental health, and causes of suicide. It is an extremely complex case with even more complex people and issues involved, and “Plainville” does it’s best to dramatize it just enough without taking away from the truth.

“The Girl From Plainville” retells the true story of the tragic suicide of Conrad “Coco” Roy III, who’s long distance relationship (primarily through text messaging) with Michelle Carter became the key catalyst for his decision. Through their uncovered conversations, it was discovered that Carter encouraged Conrad to go through with it, and all but pushed him over the edge to end his life. Carter was convicted of involuntary manslaughter due to her involvement. It remains one of the first convictions based solely on digital conversations.

The series stars Elle Fanning as Michelle Carter, Colton Ryan as Conrad Roy III, Chloe Sevigny as Lynn Roy (Conrad’s mother), and Cara Buono as Gail Carter (Michelle’s mother). It was created by Liz Hannah (“The Dropout,” “Mindhunters“) and Patrick MacManus and based on the book of the same name by Jesse Baron. “Plainville” is clearly a dramatization of real events, and splits the story between the present and flashbacks to help put together the teenage relationship. The series begins with the tragic suicide of Conrad, and then proceeds to unfold the events of Michelle being a suspect to being the prime suspect to retelling the story of how the two met and how their primarily texting relationship became the largest factor in the tragedy.

Where the series truly shines is in Fanning’s performance as Michelle. She is once again adding to the ever-expanding performances of her talented family, and “Plainville” is just another example of how good those Fannings are. She is complex and terrifying, and from the moment we meet her we know that something is quite right with her and the reality she has created for herself. So much of what works in “Plainville” rests squarely on her shoulders. She is the main focus of the story, and we are constantly left to unravel what is true and what Michelle believes to be true. It sets the stage for an engaging true crime drama even if you already know how those events unfold, and it is up to Fanning to sell it to viewers. Like Amanda Seyfried in “The Dropout,” Fanning is more than up to the challenge here, delivering a harrowing and unnerving performance that requires her to constantly shift emotions on a dime.

With the star firing on all cylinders, everyone else is then elevated to that same level. “Plainville” also serves as a reminder of just how good Chloe Sevigny can be, as she really brings it here as a grieving mother trying desperately to make sense of what happened to her son. As far as dramatizations go, “Plainville” does a good job in getting the most out of its cast without ever straying too far away from the real life events. For the most part, the story unfolds in an engaging manner, adding bit by bit through present day and flashbacks to fill in the gaps. Nothing is ever certain and no one (particularly Michelle) is as they seem, and “Plainville” does its best to provide as much detail and complexity to the sprawling scope of a complicated crime.

And it’s here where “Plainville” stumbles just a little bit. Though Fanning is chewing through scenery at every turn, we are quickly clued in to the fact that something is clearly wrong with her and her relationship with Conrad. The series begins with the loss, and shows Michelle’s desperate attempts to make herself a pivotal person in the lives of a family she’s never actually met. This would be enough to clue us in to the fact that there is some clear mental issues going on beneath the surface, and pacing wise it would make sense to keep that a mystery as more and more details begin to be revealed. Instead, the very beginning of the series leans into these delusions, and presents Michelle as a clearly manipulative and disillusioned individual who is clearly suffering from something unseen.

It’s not that we don’t need to see this, because we absolutely due in order to really grasp how her texts were considered to be a direct result in the suicide. But it’s a misstep for “The Girl From Plainville” because it plays this hand so heavily and so quickly that it’s hard to really have any reservations about who Michelle actually is. Hell, we see her practicing her eulogy speech (a rehearsed, word for word recreation of “Glee’s” Rachel’s tribute to the passing of Finn which is playing on a laptop in the background because the show played a pivotal role in their relationship) in front of a mirror, a clear sign that something is not right here. This is fine for say, maybe episode 3, but it’s hard to have any mystery surrounding Michelle and her state mind moments after we meet her.

It’s frustrating, because “Plainville” isn’t necessarily trying to make Michelle out to be a misunderstood hero, but it does try to layer nuances throughout the series and that’s hard to do when our minds are already made up about her from the jump. Who Michelle is in this story and how culpable we find her in the end doesn’t change, but “Plainville” doesn’t allow us to make up our own minds. It sells a troubled girl who is clearly to blame for tragic events almost immediately, and then asks us to invest in the rest of the story to decide what we think happened. This makes “Plainville” a bit at odds with itself, despite being really well acted and overall well paced and intriguing.

There’s a lot to like about “The Girl From Plainville,” and if you’re a true crime fan then I would highly recommend giving it a watch. If for nothing else, it brings to light some important conversations we should continue to have regarding mental health, suicide, and social media. These are all things that can’t be solved by a true crime drama, and are difficult conversations to have. But they are nonetheless, and “The Girl From Plainville” gets far more right than wrong when it comes to bringing them all to light.

“The Girl From Plainville” premieres on Hulu on March 29th. You can watch the trailer below.

The Music World Reacts to Passing of Taylor Hawkins

“Naruto’s” Rock Lee is Getting A New Figure