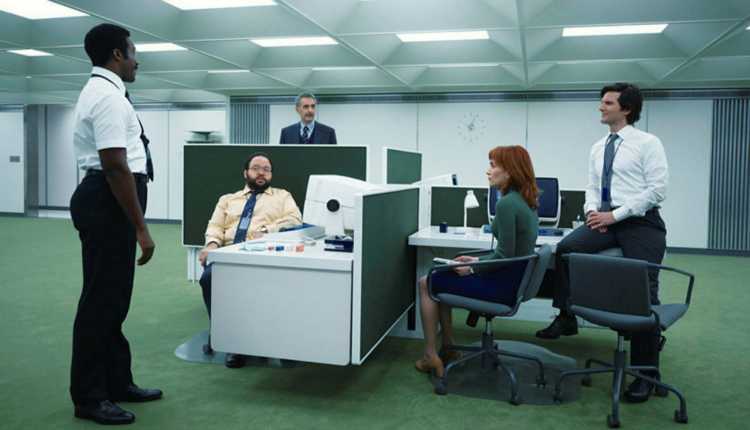 “Severance” takes an unsettling deep dive into the question of can we really separate work from ‘life’? The new drama from Dan Erickson, directed by Ben Stiller and Aoifle McArdle, is Apple TV+’s latest excellent watch option.

Adam Scott stars as Mark, who has opted to undergo a voluntary surgical procedure known as severance. This means while he’s at work he has no recollection of his “outside” life, and vice versa. It’s a concept that could be tempting to many working people. Not having to bring the baggage of that fight you just had to work. Never having to replay that horrible meeting you had over and over again on your drive home.

It’s a premise that probably hits even harder these days as many folks are unable to separate their physical work spaces from their ‘life’ ones. One of the greatest concepts the show grapples with is how we define having a ‘life’ – yes still in quotes. Are we ever able to truly separate ourselves based on what circumstances require of us?

The show dives into dystopia head first. From the clinically designed sets (they feel out of an 1970s office catalog) to the eerie score, everything about “Severance” feels unsettling. Mark begins to question the merits of the procedure. As he does so, the show begins to show it’s brilliance. The premise could have gone in an overly cheesy and glossy direction. There are moments where it flirts with the absurd, but it always feels grounded. They’re constantly giving just the right amount of glimpses and teases into the greater mystery. Enough to always keep us wanting the next episode. The mystery grows as the season progresses in a well paced cadence.

We are heavily invested in the inner and outer lives of all of these characters. Here’s hoping the show gets renewed for a season 2!

The first two episodes of “Severance” are available to stream now on Apple TV+.

“Lucy and Desi” is a Stand Out Among the Familiar [Review]