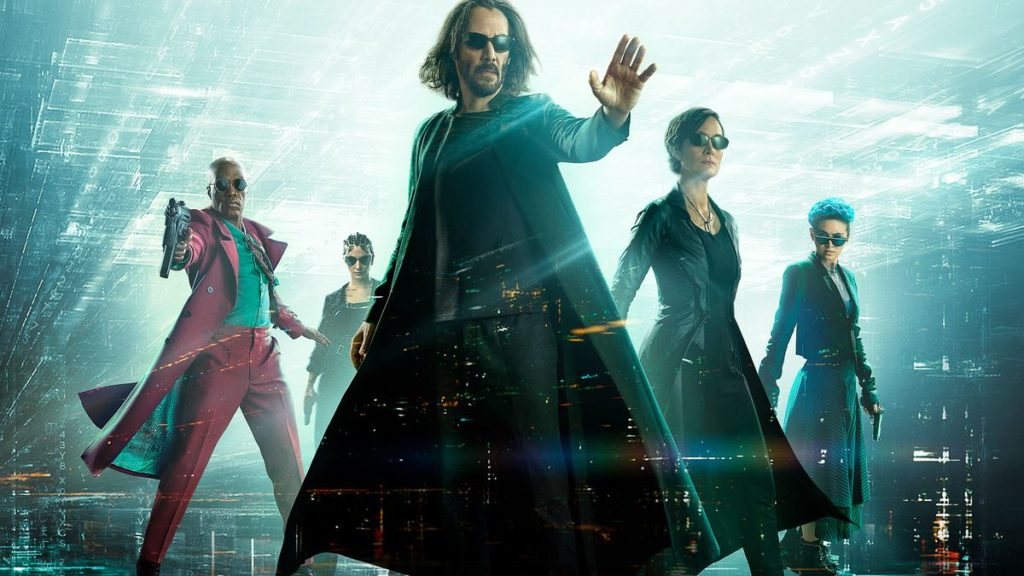 When “The Matrix” first released back in the Spring of 1999, it was helped along by a marketing campaign that really held nothing more than the tagline of “What is The Matrix?” Part of the captivating spell of that first outing was not knowing about the rabbit hole audiences were about to go down, combined with new special effects visuals.

Cut to 2021, and “The Matrix Resurrections” is hitting theaters more than 18 years since the intervening three films (two live-action and one animated). The result is a disappointing mixture of self-referential potential, and a storyline that doesn’t lift the bar much from where it fell with “The Matrix Revolutions.”

Where “Revolutions” succeeds is in finding a way to become wildly self-aware. Neo aka Thomas Anderson (Keanu Reeves) is back, and settled into what appears to be our world, but now as a world-famous game designer. What has he created? Three groundbreaking games centered around The Matrix. Yup, everything that happened in the earlier films were recreated by Neo as games, with himself cast as the lead protagonist. His business partner, Smith (played by “Hamilton’s” Jonathan Groff) informs him that the game company’s parent firm, Warner Bros., is forcing them to make a fourth installment in the game.

That is, to create “Matrix IV,” with Neo protesting that he doesn’t want to revisit it again, but rather do something new. On the one hand it’s fun to play with the level of self-awareness that the film has. However on the other…you can’t help but wonder how much of the protesting on not wanting to go back again is actually Reeves’ voice.

More than 60 years have passed since the events in “Revolutions“, and both the tech as well as the humans have advanced along, and it seems there are still more things to be uncovered related to the machinations of the artificial sentients (the machine overlords from the earlier films). Without going too far into spoiler territory, the main fun of the film rests with the various ways that the meta elements of the film’s being aware of itself, and in seeing Neo and Trinity (Carrie-Anne Moss) back on the screen together once again. The plot itself is wildly thin, and some of the logic falls apart with both unnecessary danger for the characters, and motivations that scream of being purely conveniences for the story rather than feeling like anything that would make much sense.

The battles devolve quickly to Neo continually reusing a single power move (which he then stops using whenever the bad guy(s) need to feel like they have a chance). There’s little real feeling of danger for any of our characters, and a general sense of “why is any of this happening,” winds up being the theme of the day.

Writer/director Lana Wachowski has a solid penchant for creating deep character worlds (as she has in both “Sense8” and “Cloud Atlas“), however ensuring that the overall story holds up between the anchor scenes doesn’t always work out they way the audience might have hoped. There are amazing moments, but the threads don’t always connect.

“The Matrix Resurrections” is rated R, and opens in theaters everywhere on December 22nd 2021. It will also be available via streaming on HBO Max same day. There is an end of credits scene as well, though we will leave it to the viewer to determine if sticking through the 5+ minutes of painfully slow crawl is worth it.