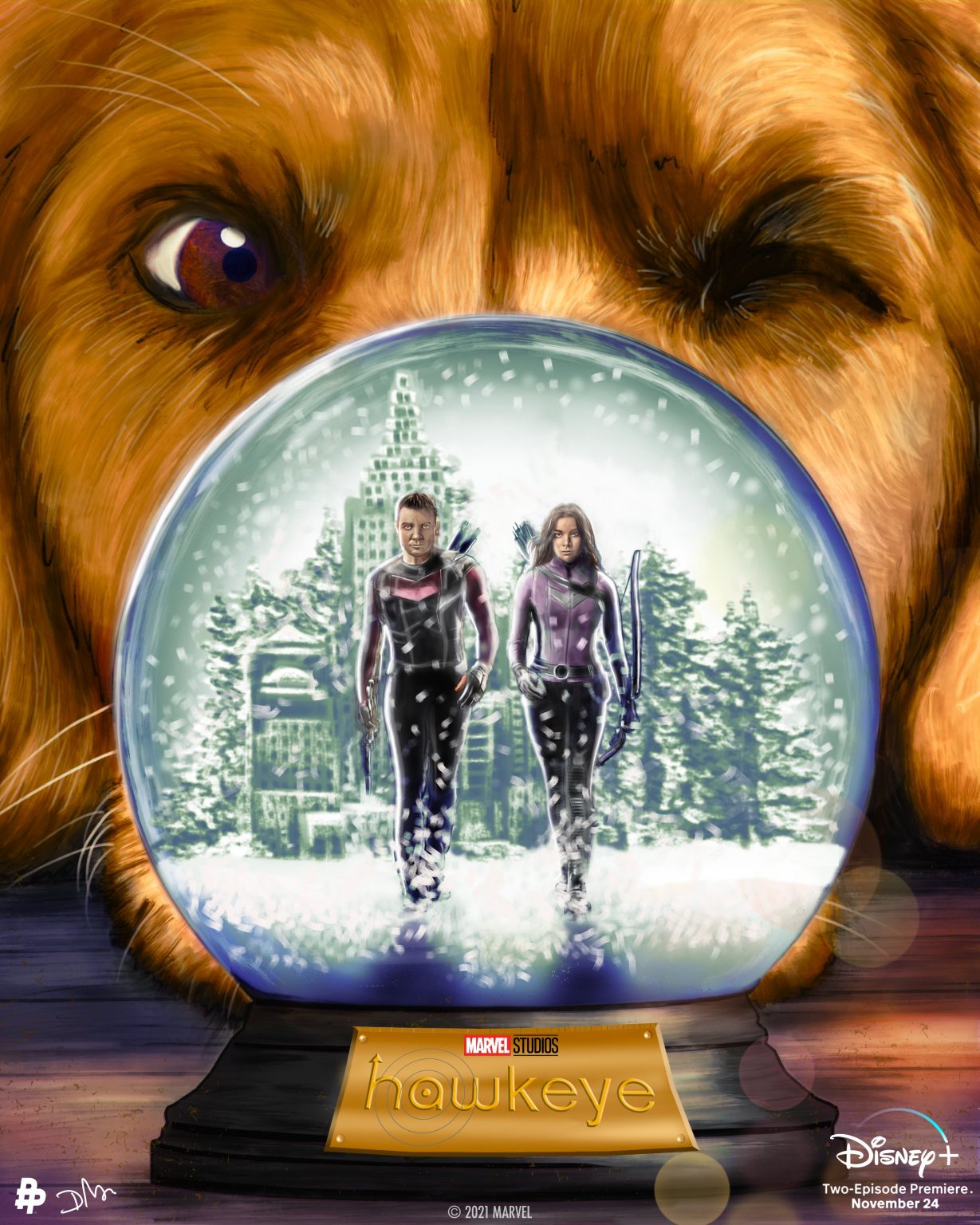 You really don’t realize how heavy the MCU has gotten until you sit down and fire up the first two “Hawkeye” episodes on Disney+. Not that there isn’t humor in the current phase of the connected universe. Just that, with every growing expansion into cosmic proportions and larger scaled connections, it’s rather refreshing to strip Marvel Studios down to nothing more than local city heroes dealing with city problems.

The cosmic implications and traded out for the simplicity of the criminal underworld, and the heavy, weighty, game changing implications are traded out for simple, likable characters. This the right move at the right time, almost as if the MCU knew what they were doing all along. “Hawkeye” is a much need break in the MCU, returning to a much more lighthearted and contained story that’s perfect for the holidays.

“Hawkeye” the series was created by Jonathan Igla (who served as a writer on notable works like “Mad Men“), with the first two episodes directed by Rhys Thomas (“Saturday Night Live“), and written by Igla and Elisa Climent (Igla’s fiance and regular writing partner). It stars Hailee Steinfeld as the titular character Kate Bishop, a young girl who lost her father during the Chitauri, attack on New York in 2012. As young girl, she witnesses Hawkeye on a rooftop and decides to dedicate her extracurricular education to becoming like him. Hawkeye (Jeremy Renner) has taken his children into the city for Christmas, and doesn’t relish the fame that comes with being an Avenger. The two paths collide when Bishop discovers a black market auction that has the costume of Ronin (Hawkeye’s post-blip alter-ego). The auction is attacked, and Bishop makes off with suit which in turn brings an enormous amount of unwanted attention that requires Hawkeye to once again reluctantly get back into action.

There is a lot to like in “Hawkeye,” and the first two episodes set up a promising and enjoyable limited run. The show seems to benefit from having fewer episodes, topping out at 6 total. This may seem like a bad thing, but the contained, simple story lends itself to a quick MCU entry just to wet the pallet with a fun, light hearted action adventure series. The show starts incredibly strong, but it also doesn’t need to stretch the narrative beyond its means. This is a common Netflix trap that “Hawkeye” smartly avoids. The show’s execution and script it tight and focused, not getting too carried away with whatever the long lasting implications may be and being solely centered and present on the story at hand. The show feels free; free to be fun, funny, heartfelt, and original in the sense that it’s it own thing. While I’m a huge fan of “WandaVision,” “Loki” and even “Falcon and the Winter Soldier,” all of those series are founded on the larger implications of the MCU. They obviously have to be, as they seek to set up the future of the franchise. Luckily for us, “Hawkeye” isn’t that and doesn’t need to be that. it proves that the MCU is still more than capable of telling singular stories that are only slightly connected to previous events rather than being defined by them.

Of course, “Hawkeye” only works if Kate Bishop is a likable character and pairs well with Clint. Hailee Steinfeld is 25 years old with the acting prowess and credentials of Meryl Streep. She’s a veteran in less than 13 years, and is the shining star of the series. Steinfeld’s likability and charm not only light up the screen every time she’s on it, but she also pairs really well with Renner. They have terrific chemistry, and she brings out the best in him. Their partnership is the driving force of the series, and the show is right to highlight their chemistry and interactions together. You also get to see a different side of Hawkeye, namely a man who wears the constant world ending battles on his sleeve. Barton is a somewhat of a broken man, struggling to deal with the fame that comes with being an Avenger and wanting to just be with his family away from everyone else. Barton has always been a kind of reluctant hero, but here we see the repercussions of his heroism and how that has led him to be a man who just wants to be left alone. The loss of his friends and the things he’s been through have clearly worn him down, so when Kate Bishop’s curiosity requires him to come back into the fold, it’s quite literally the last thing he wants to do.

Likewise Steinfeld’s Bishop is a ton of fun. A skilled, highly motivated but mischevious teenager who wants nothing more than to literally be Hawkeye himself makes her an easy character to root for, even though most of her decisions create more problems than solutions. She idolizes her hero, and there are definitely themes of never meeting them and the cost of heroics, which Bishop is forced to slowly but surely learn. Obviously we only have two episodes to go off of, and I’m sure that “Hawkeye” will start to shift the mystery behind the events in Bishop’s life and how they connect with Bartons. For now, we get a wonderful snapshot of humor and adventure, which is furthered by terrific performances from the show’s leads. Steinfeld was the right choice here, and the series is all the better for having her as the star.

“Hawkeye” is a lot of fun, and is exactly the kind of MCU romp we need during the holidays. It’s lighthearted and not nearly as dramatic or weighty as some of the other previous entries. It’s not void of purpose or emotion, as both its leads as well as some of the supporting cast are all nuanced and fully realized characters. It is the perfect balance of having deeper themes shallowly buried under fun, simplistic action adventure. And for those you wondering, yes. Rogers: The Musical is fantastic and everything you hoped it would be. The song “I Can Do This All Day” is as magical as it is ridiculous, and it is just as silly and theatrical as I could’ve ever imagined it being.

Even if you aren’t already a fan of the character and don’t really care to see a solo outing, “Hawkeye” makes a strong case for needing one. It is handled with a lot of care, and injects some lightness into a much needed universe. The show also makes a case for standing on its own, not really NEEDING to be connected to some big, giant, cosmic, universe ending story. Sure, the story is deeply tied to the events of the “Avengers,” but that’s only there to lay the foundation of the story at hand rather than taking over all of the events that are unfolding. The first two episodes are focused on introducing us to these characters, with (I’m assuming) the rest of the show will seek to unravel more of the mystery surrounding Kate Bishop and well as strengthen the relationship between the two characters.

“Hawkeye” is exactly what the MCU needs right now, and exactly what WE need to find some sliver of joy during the holiday seasons.

And yes, “Hawkeye” is a Christmas show. No debate. Deal with it. New episodes will release on Wednesday, only on Disney+.