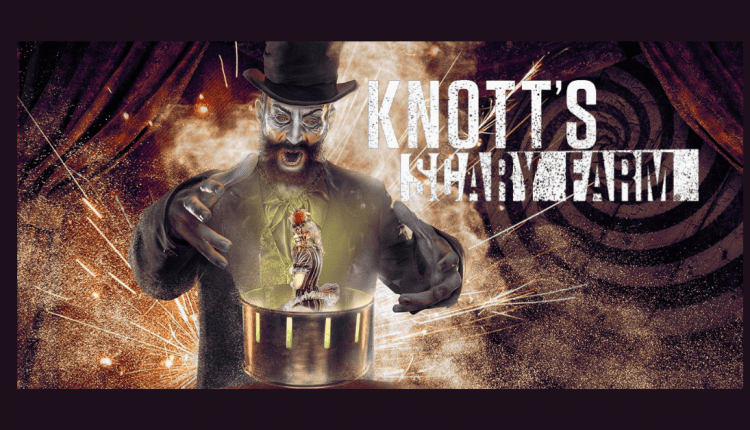 Knott’s Scary Farm is back with a new maze and scare zone themes. We are SO READY to feel our hearts thumping in our chests as we travel down dark and eerie pathways. This year’s new maze is called Mesmer: Sideshow of the Mind. The basic story of the maze follows a crazed hypnotist who preys on your fears.

The trailer showcasing the maze helps set the mood for the 2021 Halloween season at Knott’s Scary Farm. Elements including poison, creepy music, shadows, and a disgruntled employee launch us into the storyline.

Other Things You Can Expect at Knott’s Scary Farm

There are 8 mazes in total including Mesmer: Sideshow of the Mind. Knott’s calls them Fright Lanes, and the other mazes include Dark Entities, Dark Ride: Castle of Chaos, Origins: The Curse of Calico, Pumpkin Eater, Paranormal Inc., and Wax Works.

The theme park also has a newly themed scare zone titled the Gore-ing 20’s. Which is fitting considering the 20’s we’ve been experiencing so far.

The Gore-ing 20’s is where “gangsters run illicit hooch for the ghostly revelers as the otherworldly musicians play the music of the damned.”

Five scare zones keep you on your toes as you walk down foggy paths surrounded by creepy noises. Over 1,000 scare actors are scattered around the park, waiting to make you scream.

Other spooky activities include musical performances, magic shows, and even a comedy show!

Knott’s Scary Farm runs from September 12th-October 31st. This spooky event is not recommended for children under 13.

Current health guidelines require masks be worn in indoor spaces, and in all outdoor gatherings of 1,000 or more persons beginning September 20th in the state of California. So stay safe, and be prepared with a mask fit for the occasion!

Are you ready to get scared?