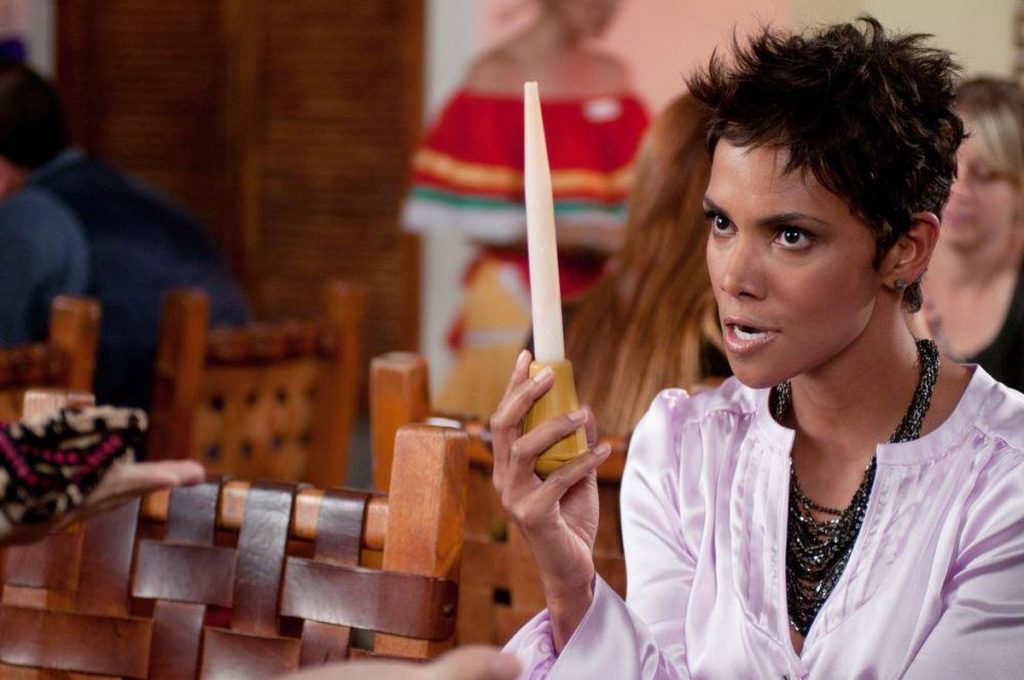 This is going to be more of a warning than a review, so it may end up being one of the shortest of its kind. That is partly due to the fact that there’s not much to actually review in “Movie 43” but also that the “film” damn near impossible to get through in one single sitting. I distinctly remember seeing in the theaters when it was released and even my younger days with a penchant and stomach for grotesque humor, I could barely make it through to the end, even with all the other titles on our Rated 10% Or Less less.

Fast forward 7 years and while I’m still game for a good gross out gag, I had to turn it off about an hour in. I’m sorry, but I just couldn’t do it; I simply couldn’t bring myself to finish “Movie 43.” I don’t know if this gives me the right to act as any kind of an authority on the film, but I can tell you that skipping out on the last half hour is probably for the best. This is more of a dare than a film, a litmus test of just how much of a bad thing you can stomach in a single viewing.

“Movie 43” is a collection of 15 sketches framed as pitches from writer to a studio producer, with each scene featuring star studded actors in just about every role. The cast includes Hugh Jackman, Chris Pratt, Halle Berry, Anna Ferris, Chloe Moretz, Kate Winslet, Keiren Culkin, Emma Stone, Stephen Merchant, Naomi Watts, Johnny Knoxville, Gerard Butler, Elizabeth Banks, Sean William Scott and many, many more. You would think that with this many big name actors, a film comprised of short sketches has to go out of its way to go wrong. My god, does “Movie 43” achieve wrong in so many ways. It is rare that a film feels intentionally bad, but there is simply no other reason for something like this to exist other than the filmmakers purposefully trying to make the worst possible collection of humorless dick jokes.

How in the world did all these people end up in something like “Movie 43” you ask? Well it involves a lot of favors, begging, desperation and downright shady tactics to get everyone to sign on the dotted line. This involves tactics like filming Winslett and Jackman’s scene 4 years before the rest of the sketches even began and using it as a pitch meeting tactic (if it’s good enough for Kate Winslett and Wolverine, it must be good enough for me huh?) as well as not telling any of the cast what the rest of the sketches were comprised of, pitching the idea of low risk and little time to knock out their scenes. It also involved rushed productions and working with everyone’s schedule, like flying out to New York on a moments notice and setting up preproduction in 4 days for 2 days with Richard Gere. Basically, the actors in “Movie 43” really didn’t know they were in “Movie 43,” with most of them getting guilted or tricked into being in this godforsaken mess.

This sadly isn’t unusual either, as tricking actors into contracts is actually kind of a regular practice in Hollywood. What is unusual is how many actors were tricked for a single film with only people like George Clooney and “South Park” creators Matt Stone and Trey Parker managing to escape in the nick of time. Reportedly, Clooney told them the producers to “Fuck off,” which is the appropriate response and everyone should have done so here. I don’t particularly blame the actors in “Movie 43” now knowing that many of them had virtually no idea what was happening. It’s a damn shame that deceit won out here and we can all remember them for this film that should be buried in a vault inside an active volcano.

“Movie 43” earned a 4% on Rotten Tomatoes, which is 4% more than it deserves. The film is as unfixable as it is unwatchable, and if I had the critical power I would land on a negative number as its final rating figure. There is simply nothing that can justify the existence of “Movie 43.” It is for no one and shouldn’t be seen by anybody. It is an unwatchable disaster, a film so intentionally bad and grotesque it pushes the limits of what comedy can be even for those who believe humor doesn’t have limits. It does, and “Movie 43” is an example of what happens when everything is pushed too far. It’s gross, unfunny, and pitiful, drumming up more sympathy for the actors than laughs for what can barely be considered sketches.