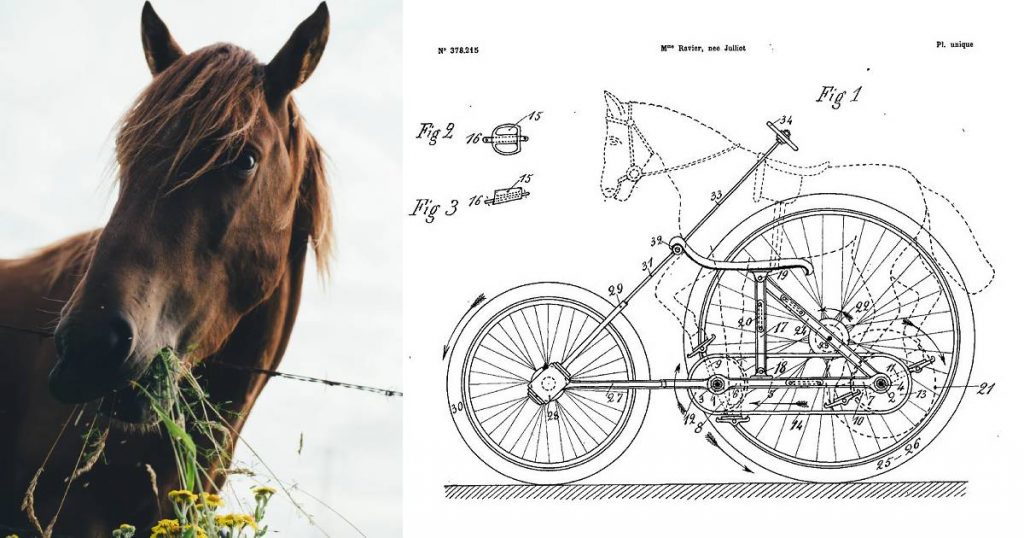 Did You Know: Bicycle Patent Filed in 1907 Was For Animals?!?

Today while browsing the internet I stumbled upon something I thought Nerdbot readers may find interesting. In 1907, Madeleine Ravier of Paris, France patented a ‘cycles pour animaux.’ Or in other words- a bicycle for animals.

Ravier argued that since man had created a vehicle that served him so well, animals should have the same convenience. The patent is in French, but some of the automatically translated bits are comprehensible enough to share here.

“What man did for himself (increase mobility by use of mechanics) he can do it for animals, or at least for some of them; There is a way to increase the efficiency of their limbs by the intercalation, between these limbs and the field of motion, of mechanical devices receiving the reciprocating motion of the limbs, transforming it into continuous rotary motion, and ending in rotating parts; and the result obtained can be used to make animals move man faster and farther than has hitherto been done by using them.”

To illustrate the concept, Ravier focused on the quadropeds. Horses in particular served her well for the illustration. The pedals would have places for their horse shoes and be able to be gotten on and off without a key.

The image drawn up is quite funny. Assuming a horse could actually balance on a two wheel bicycle and not just fall to one side or the other. Personally I think she should have added some type of training wheels for the poor horse.

Eventually Ravier wanted to make a device not just for quadrupeds but also for swimming animals as well. She just wasn’t sure how to illustrate how best to serve the aquatic animals at the time. We will just have to use our imaginations and assume it was some type of bike with a propeller.

It’s a mystery to me why this didn’t take off. I mean think of the possibilities! But now I know what could have been so I’m happy with just the new knowledge inside my head. It won’t win me any prizes on “Jeopardy!,” but it will serve me well at the next party I go to.