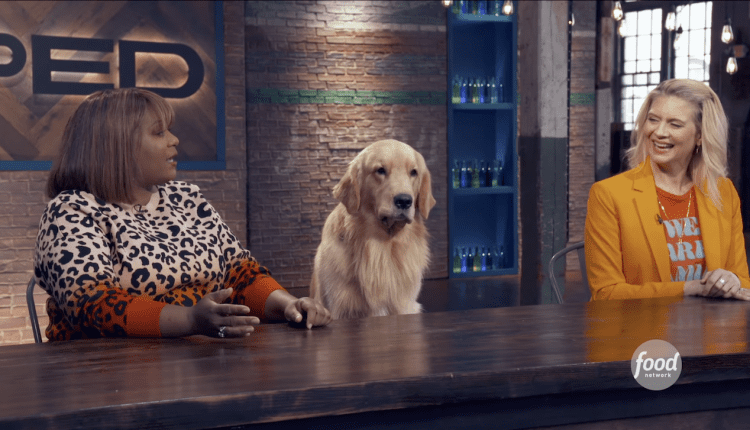 If you know anything about me, you know that I absolutely love Food Network’s “Chopped.” I’ve seen just about every iteration of the show, from “Chopped Jr.” to “Chopped Champions” to All Stars to Alton Brown’s Maniacal Baskets. If there’s a theme or off shoot of special guest highlight, chances are I’ve seen just about every single episode and variation of the show. I enjoy cooking shows, but “Chopped” stands as my favorite among them. Even with 50 seasons, 600 episodes and 39 specials, nothing could prepare me for the latest episode that aired on 7/27/21. It’s about as close to jumping the shark as a show about cooks battling it out over mystery ingredients can get, and I’m still not entirely sure what to do with it. The most recent episode of “Chopped,” titled “Chef’s Best Friend,” added the strangest and unique guest to date: a dog!

That’s right, a literal dog named James was the most recent guest host. The contestants were charged with not only having to make meals for the regular judges using the mystery ingredients, but they ALSO has to create a dish for James. It almost felt like a parody episode, like something you would see on “Saturday Night Live” or even a quick “Robot Chicken” bit. There’s just nothing that can prepare you from watching the “Chopped” camera pan across the judges table to see a dog sitting next to Amanda Freitag and Scott Conant. And I’ve watched contestants make ice cream out of canned haggis. It’s hard not to watch the episode in a perpetual state of disbelief. The entire episode doesn’t seem real, but I guess if you’ve been on as long as “Chopped” has, any new idea is a good idea at this point.

That’s not to say the episode is bad. It’s a pretty standard “Chopped” episode all things considered, with the judges constantly forced to make gourmet meals out dog punned items. These items include things like Dog Beer, which I’m convinced isn’t actually real and made up by the producers of the show. There were also Sardines with the the heads on and a literal bone in the basket, another nod to our furry guest. The contestants mainly focused on their dishes for the judges, but never forgot to create a delectable treat for the big, cute golden retriever. Not surprisingly, James the dog ate everything in the bowl, and at times looked around for more. While impressing a dog shouldn’t be that hard and he did eat everything he was given, there were certainly dishes he enjoyed more than others, particularly one that seemed to take him a bit longer to eat that included a piece of toasted bread.

While I still can’t completely get over the entire framework of a dog judge on a cooking competition, the whole episode ended up being pretty par for the course for “Chopped.” I still can’t get over how weird it was watching a dog sitting at the judges table, but the animal lover in me couldn’t help but find the whole thing charming and adorable. James is a really good boy, and sat quietly as the contestants fetched things around the kitchen, frantically trying to complete their dishes on time. The episode is packed with dog puns and sob stories, perfectly on brand for the show. As out of left field as the episode seems, it’s still very much in the wheelhouse of the series.

I don’t know that I want this be a regular thing, though. The show is already weird enough, what with their never ending rotation of bizarre and outright made up ingredients in their baskets. God forbid we turn on “Chopped” to see a monkey or a goat or hell, a cat as the next guest. Obviously none of those animals have quite the same draw as a dog, but as much as I enjoyed the episode I’m hoping this is a one off.

But who knows, maybe James is such a hit the 700th episode of “Chopped” is just a bunch of dogs sampling the food and everybody wins.

After “Chef’s Best Friend,” I’ll expect just about anything from the series now.