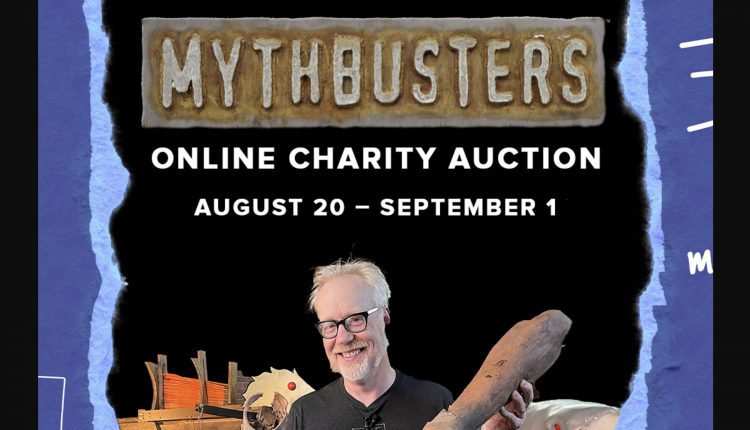 We are very pleased to tell you about an upcoming auction coming from PropStore. This isn’t just your run of the mill memorabilia showcase either- this is a charity auction where 95% of the proceeds will benefit The Grant Imahara STEAM Foundation.

As you’ll recall, we lost Imahara quite suddenly in July of 2020. The “Mythbusters,” “Battlebots,” and “White Rabbit Project” star was dearly loved and respected, from industry professionals, former co-stars, and fans alike.

This morning, auction house PropStore announced the upcoming auction, which will see a portion of proceeds raised from the August-September event going directly to the non-profit organized by Grant’s mother, Carolyn Imahara.

In association with the Grant Imahara STEAM Foundation and Tested, Prop Store presents The MythBusters Charity Online Auction, an exclusive auction of over 80 props, blueprints, art and behind-the-scenes production material from MythBusters and MythBusters: The Search!

A portion of the proceeds from this auction will benefit The Grant Imahara STEAM Foundation, a non-profit organization founded by Grant’s mother, Carolyn Imahara, and several of his lifelong friends.

Guided by the core principles embodied by Grant throughout his life – curiosity, integrity and generosity – The Grant Imahara Steam Foundation’s mission is to inspire emerging talent and empower underserved youth in Science, Technology, Engineering, Art, and Math education.

There was even a preview gallery of some of the iconic “Mythbusters” props that will be part of the catalog, including a mechanical shark from the “Jaws” episode, and Buster!

You can register for the auction here, and check out the preview gallery here. Obviously more items will be revealed when the auction takes place, August 20th-September 1st, 2021.