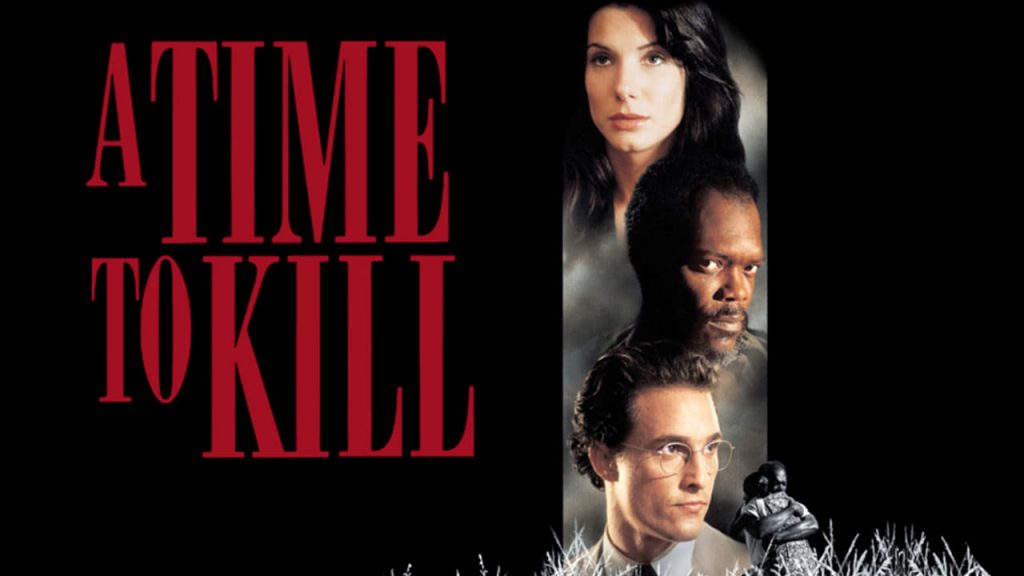 Nerdbot Cinema Reviews: “A Time to Kill” Turns 25 This Month

This is perhaps the most irreverent and relevant film that celebrates its 25th birthday I’ve done so far. “A Time to Kill” somehow manages to date itself with its broad sentimentality of deeper systemic issues while also somehow remaining rather timely dealing with those very same issues as we view them today. The film may be a little too cliche and simple for its own good, but it nevertheless touches (or at least attempts to touch) on the very things that still plague America today. Any film that tries to tackle and solve racism in a span of 2 hours has its work cut out for it, and “A Time to Kill” is elevated more by its performances that it is with the story that’s being told.

The film becomes somewhat of a definitive American film and not in a complimentary way. Internationally, it fails to resonate with most viewers, as the types of systemic racism, gun violence, death penalty and justified vigilantism depicted can only be understood by solely American audiences. It glamorizes the worst of American culture, and reaches unsettling conclusions through over the top sentimentality.

That’s not say “A Time to Kill” is a bad movie; it isn’t. It simply falls short of capturing or properly depicting the nuances and complexity of the issues the drive the story forward. It’s hard to really properly portray a film about a black man who exacts revenge on the white men who raped his daughter and feels justified for doing so because racism is the driving force within the legal system. The problem is that while none of these are above criticism and deserve hard, deep critiques, and examinations of their proceedings, it still only scratches the surface of what’s really being discussed, and essentially reaches the conclusion that revenge is fine as long as its in response to racism. The film paints in broad strokes, and while it isn’t necessarily short on emotion, it only appears to be deeper than it really is.

Without the top notch cast firing on all cylinders, even American audiences would be as disturbed as many of the foreign ones. Seriously, Europe HATED this film, having reaction of out right disdain and even hyperbolic vomiting over the films content and conclusions. It simply deals with subject matter that doesn’t translate across the world; racism and prejudice and legal loopholes and injustice exist globally, but “A Time to Kill” highlights just how American those issues are by essentially Americanizing them through every lens possible. Luckily, we have people like Matthew McConaughey, Samuel L. Jackson, Sandra Bullock, Oliver Platt (the MVP of supporting casts), Donald and Kiefer Sutherland, and of course, Kevin Spacey. Look, Spacey may be a controversial figure behind the camera, one who has some dark skeletons in his closet that came to light in the worst of ways, but in front of the camera it’s hard to deny his skill. I’m not saying someones skill outweighs any of their accusations, but for the simple sake of critiquing this film and ONLY this film, Spacey is fantastic here as the the ruthless, unforgiving DA trying the case.

Everyone does incredible here, with McConaughey cementing himself as one of the best cast protagonist lawyers in any courtroom drama out there. Forget all of his romcom efforts, McConaughey THRIVES as a hotshot lawyer pretty much always, with “A Time to Kill” and “The Lincoln Lawyer” being prime examples of just how comfortable he is in this type of role. He’s charming and enduring, and while the material may not do him too many favors, McConaughey proves that he is a legitimate actor capable of a lot of range and depth. Likewise, Sandra Bullock is about as Sandy B as you can get, with her performance screaming the greatest hits of what makes her such a Hollywood darling. Add a drunken Donald Sutherland, a villainous Kiefer Sutherland (I know he’s Jack Bauer but no one really does REALLY bad quite like Keifer) and of course the charming, joke cracking, southern hospitality of Oliver Platt and you’ve got yourself a solid watch even if you don’t necessarily have a great movie.

Quick Side note while we’re talking about performances: Samuel L. Jackson simply doesn’t get the credit he deserves for actually being a pretty well rounded and versatile actor. Though synonymous with outbursts of obscenities that have defined his career, Jackson rarely gets credit for being an emotionally deep, intense actor when the role calls for it. Things like “A Time To Kill” and “Black Snake Moan” come to mind, where Jackson is still every bit himself as we know him but also delivers a layered, nuanced, performance when he needs to. It’s easy to write him off as a one note character actor with a knack for cursing, but Jackson shines in “A Time to Kill” in ways I don’t think we talk about enough.

The truth is, the cast of “A Time to Kill” is better than the film itself, with each actor managing to disguise the emptiness of the film’s premise with emotional performances. It is in these performances that make the film worth watching. While the story may seem like it’s important, the truth is it doesn’t really add anything worth while to a very deep and complex conversation, and misplaces its pride in having a happy ending instead of truly examining the themes it so desperately wants to address. For all its posturing, “A Time to Kill” is a pretty shallow film, with most critics willing to praise the performances but dismantle everything else. Hell, as well as the film did when it was released, it was nominated for a Razzie Award for Worst Written Film Grossing over $100 million despite receiving numerous nominations for performances in the same year including a Golden Globe nomination for Samuel L. Jackson.

“A Time to Kill” is at best an average courtroom drama riddled with issues that fails to really grasp its own subject matter that happens be jam packed with incredible performances from everyone involved. The actors drive the intrigue and believability of it even if the script doesn’t really lend itself to either. It is problematic in its conclusions, but it is nevertheless a movie that certainly keeps you engaged even if it leaves you feeling something not as intended at the end.

Did you know it was directed by Joel Schumacher? We have a tendency to hold director’s worst outings as the standard of their abilities, but it isn’t always a true depiction of what they’re actually capable off. “A Time to Kill” is a well directed, well acted, problematic film that can’t really seem to comprehend the complexity of its own premise. I still legitimately enjoy this movie, and I will always applaud the film for never fully shipping the romance between Bullock and McConaughey. For film plagued cliches, it’s rather surprising they manager to avoid this trope, and that’s not without a lack of trying to pretend like it might actually happen.

I’d venture to say that “A Time to Kill” doesn’t really stand the test of time subject matter wise, but is worth a watch if for nothing else than to see well known actors in their younger days acting their hearts out.

Plus, it’s worth seeing Samuel L. Jackson scream “Yes they deserve to die and hope they burn in hell!” in context for once.

“A Time To Kill” is currently available to stream via HBO Max.