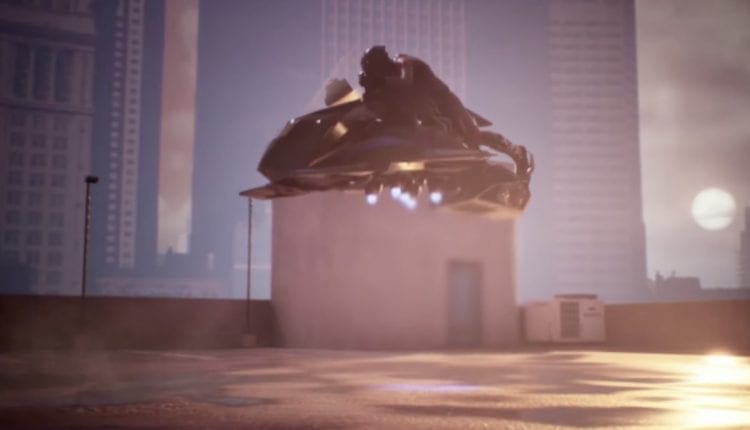 A “The Jetsons” reality where we’re all flying in traffic in the air may not be that far off. There have already been cars that turn into planes being tested, and now another VTOL (Vertical Take Off and Landing) craft has made a successful first test run. After just 18 months of building a whole new prototype, California company Jetpack Aviation has completed a flight test on their new speeder, which looks just like a flying motorcycle!

The speeder is a jet turbine-powered flying motorcycle. They aim at having a top speed of 300mph. It’s exciting because while some cars do have a top speed of over 300mph there’s also traffic and other people on the road to consider. Unless you’re on a racetrack you’ll never really get to feel that speed.

David Mayman, a jetpack enthusiast and owner of Jetpack Aviation said they had to go back to the basics to design this amazing motorcycle.

“We had to start from scratch. We have a great flight systems engineer, but he had to go back to physics modelling. And we had some different thrust configurations we wanted to try, so we had to create flight control software that could be totally flexible. Our first prototype, P1, is this big aluminum chassis, way larger than it needs to be, so we can move the engines around, try out different placements. If it was electric, you could go to a code library for a bunch of that. We had to write every line of code in the flight controller.”

In the video above you can see the test flight. The first test flight for the Speeder had the machine hover over a platform with a tether attached. The tether was not supporting the Speeder during this flight.

What Can You Do With a Master’s in Mechanical…

The Speeder will eventually be a turbine-powered flying motorcycle capable of carrying up to two people and various cargo loads. Depending on the configuration you could hold much more than just your backpack which is what a lot of motor cycle owners are limited to now.

The test shows that the software is capable of balancing and maneuvering different airframes and propulsion setups using slow-reacting turbine engines instead of instant-response electric motors.

Jetpack Aviation is selling building slots for these Speeders and have two versions available. The Recreational Speeder and the Military Speeder. Both are intended for different uses. Learn more about these Speeders here.

Oreo Releases Tutorial on How to Hide Cookies from Your Family