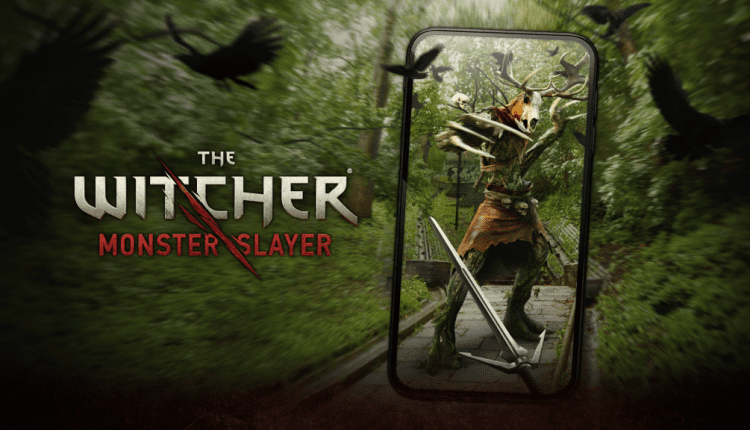 With people finally beginning to feel safer to crawl out from under their rocks after a year of solitude, it’s fun to get back into Augmented Reality (AR) mobile games like “Pokémon Go.” There’s been other attempts over the years to capture the lightening, like the briefly fun but quickly left unsupported “Ghostbusters World” and the tiresome slog of “Harry Potter: Wizards Unite,” but it’s a tough nut to crack to keep people strolling.

So what if instead of catching adorable monsters around the world as a cheery pre-teen, you were slicing off monster heads and displaying them as trophies as a hardened monster hunter? Catch the attention? Well good news, because the long awaited “The Witcher: Monster Slayer” is live, and free to play on Android and iOS today!

Striding out into the world as a monster hunting Witcher is fun and pretty quick to pick up, with the format looking clear and identifiable to anyone who’s played any of the above AR games. Your little customized Witcher character walks down a rural fantasy recreation of your local streets, with various monsters popping up nearby as you move along in the streets of the real.

On your way you’ll find items in the occasional bush, fit for crafting together one of several items that will assist you in the meat of the game, the combat. As a whole, for a mobile game it’s a pretty nice skilled feeling combat system, as opposed to the luck based system we’re a little used to in this sort of game. Wielding your chosen sword with a flick of your finger, you hack away at your enemy with fast (quick flicks of a fingertip) or strong (a flick-pause-flick rhythm) attacks, block return attacks with a held finger, and battle supplemented by the bombs, potions and oils you’ve crafted from your various pickups. Each monster type has different strengths and weaknesses, and while the weakest monsters like tiny goblin Nekkers and the revolting Hags can be dispatched mindlessly thrashing your finger around without too much difficulty, more challenging beasts like giant Ogres and demonic Fiends require an informed decision of the right sword, the correct bomb type, and the matching oil to best take care of the monster in question. At the time of writing, there’s a 128 different monsters filling out the in-game bestiary, broken up between three different rankings of how rare they are to find in the wild. Some monsters, such as Vampires, are exclusively nocturnal.

Huntin’ and killin’ also makes up a large portion of the character advancement system. As you gain experience and capture trophies to fill out your bestiary, you also gain skill points to advance done one of several ability trees, extending the effectiveness of your sword attacks, increasing your arsenal of possible crafting recipes, and so on. It’s a pretty robust advancement system for a mobile game, with a lot of options and a long way to go to max out any particular branch.

What makes “The Witcher: Monster Slayer” stand out a little from the crowd is the quest system. As you travel you’ll be urged in particular directions towards spots on your map, where you’ll encounter a new and often fully voice-acted character who’ll chat with you and send you off on a quest. Following up on these will have you searching for specific monsters and clues in the environment, leading to boss fights, rudimentary puzzles and other unique interactions in search of greater reward. Quests are also accompanied by narration and original art cutscenes in the iconic Witcher style. After beginning the games earliest few quests in a linear sequence, things opens up to reveal a dozen more to do as you choose, running around the neighborhood searching for plants, quirky NPCs, and elusive rare monsters.

While the strength of an AR game is often in its lasting power, it’s tough to say how “The Witcher: Monster Slayer” will hold up in the long run. From the get-go it seems a little more engaging than some of those that have come before, and uses the Witcher branding respectfully, drawing extensively from the IPs rich bestiary and lore. After a day playing it, I find myself eager to go back out there to add to my bestiary or follow up on another chapter of my current quest, and anything that gets me out into the sun at the moment has to be something!

“The Witcher: Monster Slayer” is free to play and available to download on the Google Play store or iOS now.

Oreo Releases Tutorial on How to Hide Cookies from Your Family