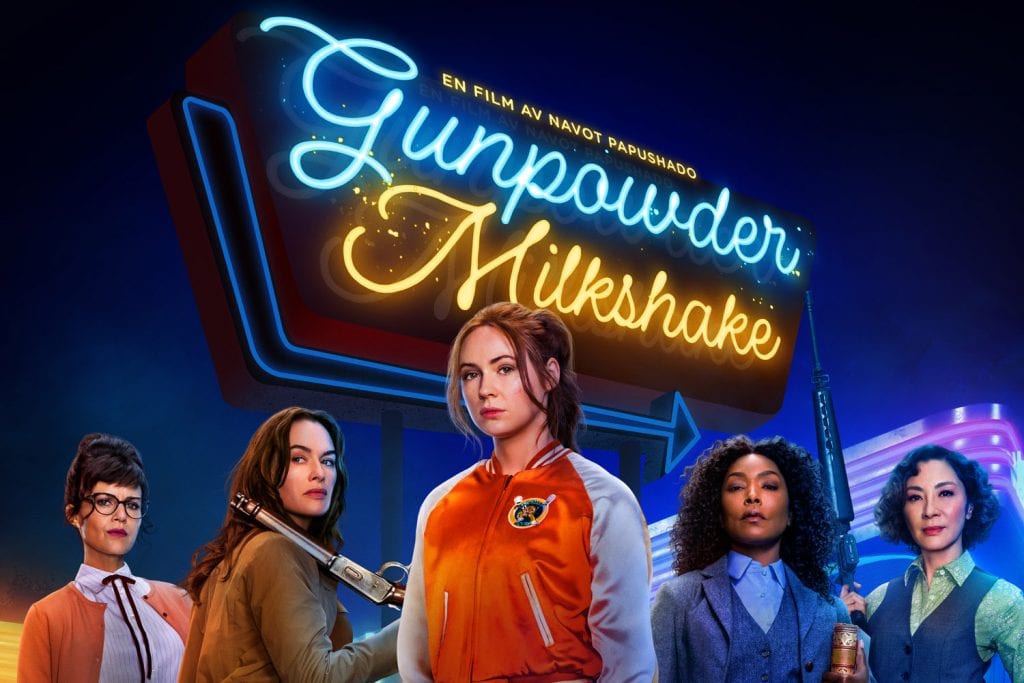 “Gunpowder Milkshake” Feels Familiar in the Worst of Ways [review]

On paper, “Gunpowder Milkshake” has all of the makings of a stylized, all female action movie. Marquee names mixed with a tongue in cheek aesthetic and cliche premise is a recipe for action success. Unfortunately, the reality is a little disappointing, as this feels more like a copycat of too many other, better iterations before it. The film wants to have a little bit of everything, and in turns leaves the viewers with next to nothing. It feels familiar in the worst of ways, and the tonal imbalances and lack of identity makes “Gunpowder Milkshake” a big let down. It would seem that “John Wick” is both a gift and curse for the action genre, gifting us with a whole new reimagining of unkillable assassins and their world but also cursing us with everyone trying to be the next bankable franchise.

“Gunpowder Milkshake” is the latter, borrowing heavily from too many other influences to be remembered or stand out in an overcrowded genre.

Written and Directed by Navot Papushado, the film follows Sam (Karen Gilliam), a young assassin for a shady organization known as the firm. After she accidentally kills the son of a higher up and botches a recovery mission the unites her with a young girl, Sam must reunite with her mother (Lena Headey) and a group of fellow assassins (Angela Bassett, Michelle Yeoh, and Carla Gugino) who have a score to settle with the firm to survive. If this all sounds like bits and pieces of movies you’ve seen before, that’s because it all unfolds with a maddening familiarity. The fact that Papushado is unsure what kind of movie he wants the film cause the film to become layered with problem after problem and makes “Gunpowder Milkshake” hard to get through. Papushado borrows heavily from others, like the neon lights of Nicolas Winding Refn, the slo-motion action of Zack Snyder, and the retro period style of Quinten Tarantino ala “Kill Bill.” Add the strong assassin world building parallels of the Wick Universe, and you’ve got a film that looks and sounds and feels like better movies.

Karen Gilliam has cemented herself as a capable action star, and she does fine here as the titular character Sam. She does John Wick well, and is a more than believable action heroin. She’s likable too, and “Gunpowder Milkshake” does it’s best to let her shine. However, unlike something like “Atomic Blonde” where it goes balls to the wall with hand to hand gun fu action that puts Charlize Theron through the ringer and tests her stunt skills, this film seems unable to pull out all the stops and run with their ideas. The action never really lets itself go, and is too few and far between to really get excited by when they finally get going. “Gunpowder Milkshake” seems intent on telling its story, but that story is such a retread of movies before it that the action gets lost in the exposition. Sorry Papushado, but the story simply isn’t that interesting, especially when you’re really never sure which one you’re really trying to tell. Is it an assassin with a heart of gold protecting a child? Is it an I want out of the game but you won’t let me go? Is it an estranged mother daughter team up? Is it a fox force 5, lady power assassin get together? Is it suppose to be tongue in cheek or are we supposed to take this seriously?

“Gunpowder Milkshake” pulls on all of these threads without ever weaving them into one, cohesive film. It simply starts a new trope whenever it wants to move on from the previous one, and never really comes together in any meaningful way. This should be the all out, all female assassin crew against the world, kicking ass and taking names because they can. Instead, the tone and narrative are constantly changing, and with an ever shifting focus from scene to scene, “Gunpowder Milkshake” melts rather quickly and never really gets going the way we all hoped it would.

I will say this: if you can make it to third act, “Gunpowder Milkshake” gets gruesomely violent, with all of ladies getting a chance to demonstrate their own individual brutality. They each get a chance to dispatch nameless henchmen in fun, violent, and unique ways. But one big action scene at the end of the movie isn’t enough to make the whole movie worth watching. By the time we finally get to see the ladies in action, the movie’s essentially over, adding very little to itself and the genre as a whole. The promise displayed in the hyper violent conclusion makes “Gunpowder Milkshake” all the more frustrating because this should have been the movie from the start. Instead, all we’re left with is a rather dull rehashing of other action films and one cool fight scene.

“Gunpowder Milkshake” has a lot of promise, ultimately fails to be as good and as fun as it could be.

You can catch the film exclusively on Netflix.