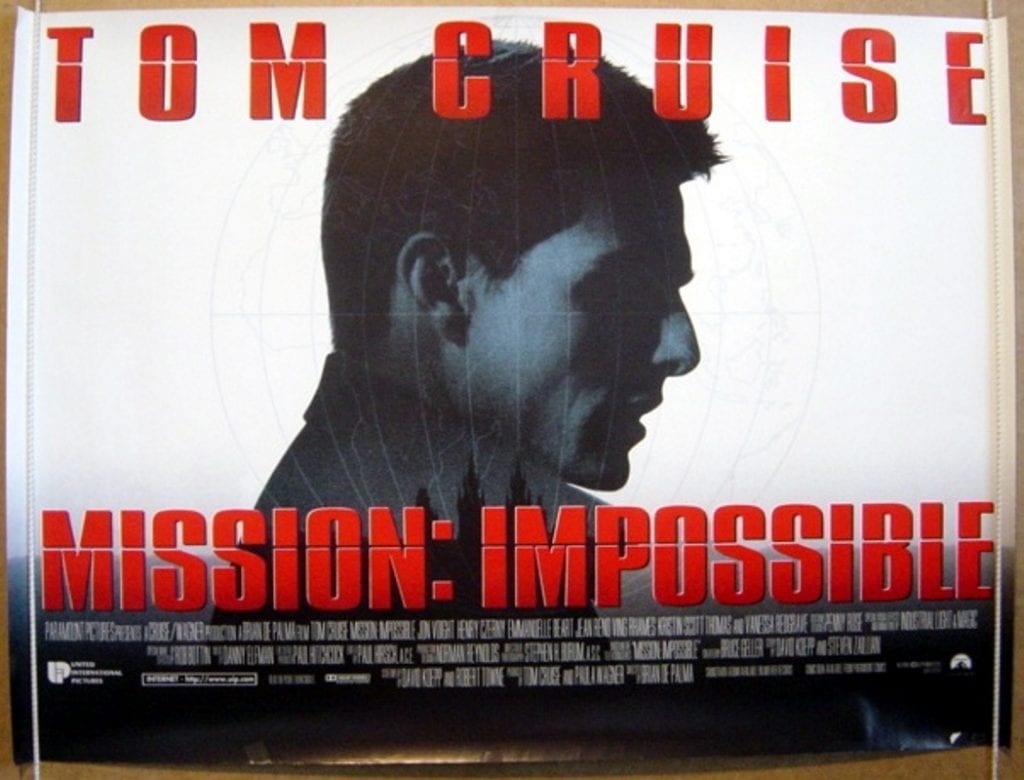 In writing this series, there are certainly some that hurt to date more than others. Some movies wear their age well, firmly planted in the era in a way that doesn’t make it uncomfortable to start doing math. Brian de Palma‘s “Mission: Impossible” turning 25 years old this month, however, does not have that comfort. This is partly because the series has transformed from television spy thriller film adaption to blockbuster powerhouse, having spent the last two decades cementing its place among the elite of summer moviegoing.

It’s even more unnerving when you realize that “Mission: Impossible” exists in a world before Tom Cruise decided to channel the full power of dianetics and become a death-defying daredevil with every new addition the franchise. This is just a young, charming actor placed in a spy thriller with a sprinkle of iconic action sequences. The transformation for espionage to explosion of the “Mission: Impossible” franchise is never more apparent than when you return to the beginning. Though almost unrecognizable from its current iteration, “Mission: Impossible” is still a solid catalyst for the franchise, and still stands alone as a solid spy thriller.

Upon a rewatch, the thing that stands out the most about the first “Mission: Impossible” film is just how heavy it is on the espionage, and how little action there actually is in the film. Don’t get me wrong, there’s just enough to keep things interesting, and obviously there are few stands out that have remained iconic even to this day. But the film overall is reliant on the spy side of things, constantly shifting loyalties and intelligence jargon and who’s working for who and why. It’s surprisingly a slow burn as opposed to the high octane thrill rides they would become. “Mission: Impossible” perhaps relies on this a little too much, becoming an overcomplicated spy story without much else to fall back on. There’s a lot that happens and not a lot to connect them all in a way that makes sense. Hell, much of the original television cast disapproved of “Mission: Impossible” as a whole, feeling slighted that not only did the whole team die in the beginning, but that for all its spy posturing, the film is too much action thriller and not enough suspense. I don’t know that I entirely agree, but given the flimsy, convoluted plot and that “Mission Impossible” does eventually become a Tom Cruise action vehicle, I can understand their sentiment.

All of that aside, “Mission: Impossible” is still a rather enjoyable film to watch. You don’t really need to understand the story to appreciate the visuals and action set pieces that, while few and far between here, still hold up tremendously. The entire sequences of stealing the NOC list from inside Langley is still one of the best, clever, practical action sequences of the series. it relies heavily on excellent wire work and of course, strong stunt work from Cruise himself. It doesn’t really matter if in context, it’s perhaps the dumbest way you could ever break into a highly secured, albeit impossible room, but it looks cool, and that’s essentially the heart of the entire franchise. Does it really matter whether or not any of it makes any sense? No, it doesn’t. The NOC List Heist lays the foundation for countless stunts to come, and watching Cruise strap himself to a plane or learn to fly and crash a helicopter or launch himself off a cliff on a motorcycle into a parachute can all pay their respects to scenes like that one.

Despite laying the groundwork for decades to come, “Mission: Impossible” feels disconnected from the very franchise it essentially created. From its opening sequence to its final action sequence, it feels like a contained, singular story. It is only connected by returning characters and name, with the story and events having zero baring on the overall world of MI6. I would argue that “Mission: Impossible” and “Mission: Impossible 2” stand alone as solo outings in a larger franchise, and can ultimately be skipped over if you’re trying to watch them all. Things don’t really start connecting until “Mission: Impossible 3,” which essentially tries to blend the over the top action of 2 with the espionage of 1. Things don’t really start feeling like a complete, connected world until 4-7, all of which are deeply connected and further the story from its predecessor.

“Mission: Impossible” feels like a distant land, one that exists outside and independent of what we’re now use to seeing. That’s neither good or no bad, but it is important if you’re planning to give it a rewatch after years of not having seen it. This is your father’s “Mission: Impossible,” and though worth watching, should be noted as such.

Overall, “Mission Impossible” may have its struggles, but where it shines it excels and earns its place among icons. Sure, the film is hard to make sense of even if you figured it out long ago, and yes it lacks the high octane death defying stunts we’ve come accustomed to. But there’s a reason we remember it, or at least pieces of it. “Mission Impossible” may not be the best in the franchise, but it still serves as the best jumping off point for what came after it.

It hurts to acknowledge how old “Mission: Impossible” is, but that aside I forgot how much I enjoy the film overall. It’s a pretty damn good movie, and yes, it is the beginning of a long standing love affair between Cruise and running.

Even 25 years ago in “Mission: Impossible” a film that has more spy talk than action, Tom Cruise finds a way to run. A lot.