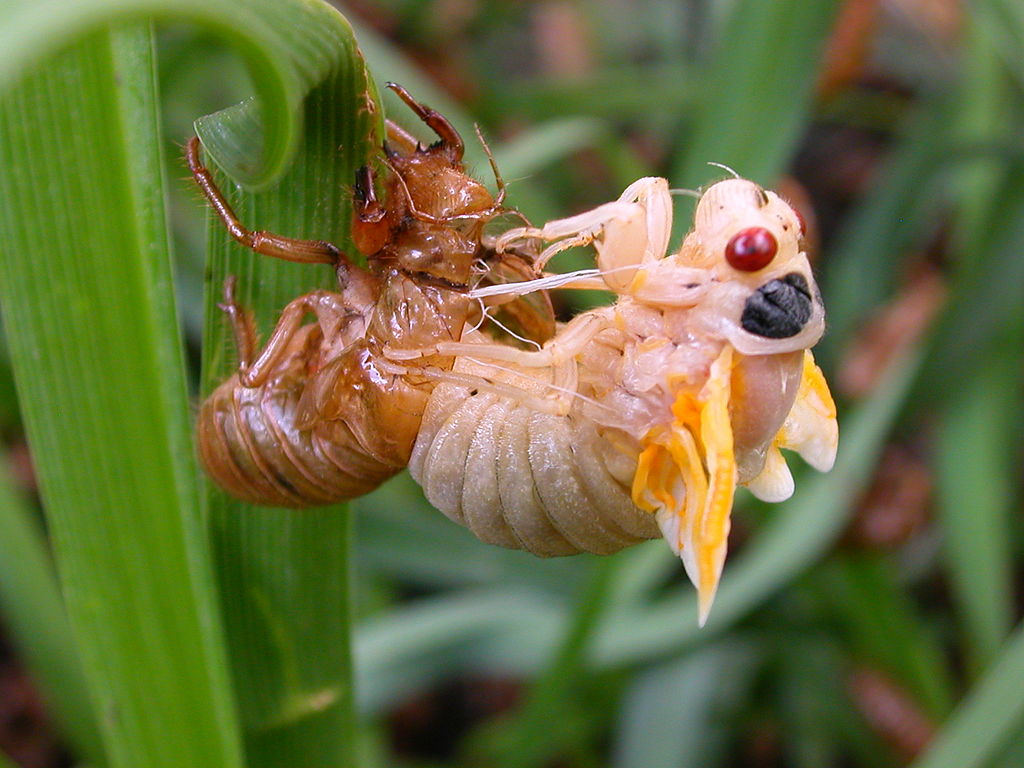 Trillions of Cicadas Set to Emerge After 17 Years Underground

Cicadas are about to emerge from their underground homes after nearly two decades. The cicada, which has a pretty weird lifecycle, will burrow underground for 13-17 years before emerging and shedding their skin. This will be the year that trillions of cicadas in the United States will rise up and start the whole process over again.

The insects were discovered by Michael Raupp and Paula Shrewsbury in a suburban backyard. Which means that it’s not just farmland and wide open spaces that will be experiencing the cicada emergence this year.

When the soil temperature reaches 64 degrees, Brood X (or Brood 10) will emerge, and shed their skin to fly up to the trees and anything else standing vertical. Many will be eaten, but they’ve adapted to this by having extraordinarily large numbers. It’s simply impossible to kill them all.

The males will sing and perform for the females, and they will mate and lay eggs. This starts an entirely new cycle of the cicada. Once the eggs are hatched the nymphs(what the babies are called) will fall tens of feet and burrow into the ground. There they will isolate for a lengthy period of time and wait to emerge when they are ready to reproduce.

Raupp described the coming storm to the AP:

“You’ve got a creature that spends 17 years in a COVID-like existence, isolated underground sucking on plant sap, right? In the 17th year these teenagers are going to come out of the earth by the billions if not trillions. They’re going to try to best everything on the planet that wants to eat them during this critical period of the nighttime when they’re just trying to grow up, they’re just trying to be adults, shed that skin, get their wings, go up into the treetops, escape their predators. Once in the treetops, hey, it’s all going to be about romance. It’s only the males that sing. It’s going to be a big boy band up there as the males try to woo those females, try to convince that special someone that she should be the mother of his nymphs. He’s going to perform, sing songs. If she likes it, she’s going to click her wings. They’re going to have some wild sex in the treetop. Then she’s going to move out to the small branches, lay their eggs. Then it’s all going to be over in a matter of weeks. They’re going to tumble down. They’re going to basically fertilize the very plants from which they were spawned. Six weeks later the tiny nymphs are going to tumble 80 feet from the treetops, bounce twice, burrow down into the soil, go back underground for another 17 years.”

While this is kind of icky because bugs- it’s also a very natural and beautiful process. Most likely the only things that will be a bother to people around this happening will be the very loud sound they emit and the smell of the decaying bodies of the dead ones. The dead carcasses will fertilize the trees they fall near and help them grow. There’s really no reason to fear these guys as they don’t carry disease, they’re just annoying because there are so many.