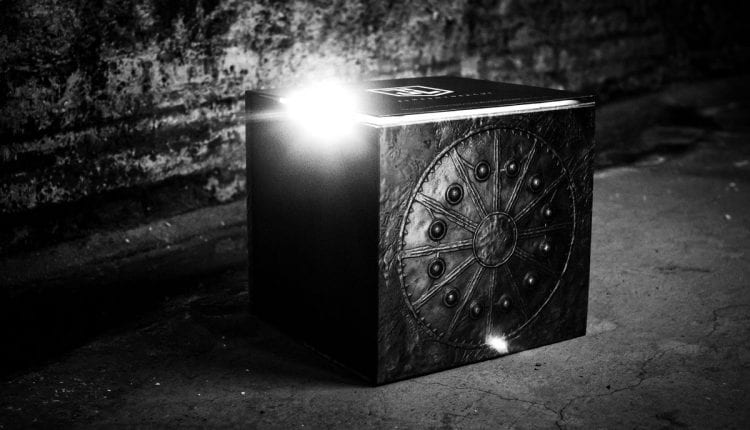 A year ago, the fabled Snyder Cut was believed to be nothing more than a pop-culture urban legend. But not only has 2021 given DC Comics fans the full four-hour edition of “Zack Snyder’s Justice League,” it’s also given them a themed gourmet meal kit in the movie’s honor. That’s correct- there is a Snyder Cut meal kit, and it is available to order for your next nerdy dinner for two.

Based on the six core members of the film’s pantheon plus the Martian Manhunter (who makes a brief cameo), the Snyder Cut meal kit is surprisingly ambitious for what it is. Made by Wonderland At Home, the multi-course meal comes complete with both alcoholic and non-alcoholic beverages and markets itself as an “at home immersive experience.”

On top of offering superhero-themed delicacies, everything is packaged inside a 1:1 scale magnetic solid board replica of one of Darkseid’s Mother Boxes. The shipping package also comes with an omega symbol QR code that not only takes you to a thank you video of director Zack Snyder, but also allows your phone to interact with the Mother Box via augmented reality.

At $130 (plus shipping), the Mother Box meal kit isn’t exactly a cheap date. But is it worth the price? The meal kit certainly comes with a lot of food- enough that you’ll likely be eating leftovers the next day- but some items on the menu are certainly better than others. Let’s break everything down.

Based off the future sea king known to the surface world as Aquaman (or at the very least named after the sea-monsters that appear in his movie), the Ocean Trench is a seafood appetizer served in an oversized tin can and drizzled with “trench dressing.” Consisting of pickled cod topped with batter bits, this appetizer may look questionable to some, but it was surprisingly tasty.

The Ocean Trench was also very easy to make, and ready to eat in under 30 minutes. While it may not be Wolfgang Puck level, it does manage to surpass the likes of Red Lobster. If seafood is regularly on your menu, the Ocean Trench starter will be a rustic treat. And if you’re not a fan of fish, there is a vegetarian falafel option.

The main-course of the Snyder Cut meal kit is two colossal Big Belly Burgers. Based off the popular burger chain appearing in the DC Universe, the Big Belly Burger appears in Zack Snyder’s Justice League when a hungry truck driver recklessly reaches down for a bite of one and nearly gives the Flash’s future wife, Iris West (Kiersey Clemons), a severe case of road rash.

While distracted driving is dangerous and should never be condoned, it’s understandable why someone would be distracted by 6 ounces of juicy Angus steak pressed between pretzel buns and a crispy potato and onion rösti. The Condiment King burger sauce was sweet and tangy, and the Condiment King cheese sauce (which had the runny consistency of hot ballpark nachos) was deceptively addictive.

By the end of our meal, my dinner companions and I discussed reverse-engineering the burgers on our own, as they were hands-down the best part of the meal kit. And like the Ocean Trench starter, the Big Belly Burger can also be substituted with a vegetarian option.

Soufflés rise, as do slain Kryptonians in Zack Snyder’s Justice League. That seems to be the rationale behind this Superman themed dessert. Topped with silver “corn clouds” straight from the fields of Smallville, this dessert comes with a ramekin emblazoned with the House of El’s “S” sigil.

For anyone who struggles with baking, this will likely be where your meal falters. While the soufflé itself tasted good (though my partner thought it was “too eggy”), it took considerably longer for the dessert to rise than stated on the instructions, and the end result was still a bit soggy. Someone skilled in baking would almost certainly have better luck with the Resurrection Soufflé, but for everyone else this will almost certainly be the hardest dish to prepare.

Giant, pre-smoked vanilla marshmallows don’t sound very fancy on the surface, but combine them with a burning palo stick (included) and Themysciran music (provided through the Mother Box’s QR code) and suddenly it feels like you’re transported to a tranquil campfire on beautiful Paradise Island. Okay… I wouldn’t go that far, but I applaud the effort, nonetheless.

Like all loveable aliens, the Martian Manhunter has a sweet-tooth for human junk food. Only instead of Reese’s Pieces, J’onn J’onzz is a sucker for something called Choco’s sandwich cookies.

Though they appear to resemble standard Oreos, Choco’s actually contain jalapeno, salsa, and cheese. While they didn’t taste as bad as expected, the cookies were pretty mediocre regardless.  What should have been a spicy dessert snack tasted more like airline food. It seems as though Martian’s have a very different taste pallet compared to humans.

Packaged inside what resembles a high-tech harmonica box from Wayne Enterprises, the chocolate bats were a surprising treat. I was expecting to taste something on par with a bat-shaped Hershey’s Kiss, but was instead greeting with a soft, buttery caramel center inside the brittle, salted dark chocolate shell. These batarang truffles were honestly way better than they had any right to be.

Representing Cyborg is the Element X energy drink, which is named after the legendary metal that powers the change engine in his armor. Aside from two pog-like Cyborg drink lights that blink red and white when you squeeze them, this drink is pretty straight-forward – mix the Element X powder into one liter of water. The drink tastes like “cool blue” Gatorade, and provides a mild pick-me-up. The taste isn’t as obnoxious as other mainstream energy drinks, but it wasn’t particularly noteworthy either.

Fans of CW’s The Flash will likely be familiar with Central City’s popular coffee shop Jitters. Included in the Mother Box meal kit are two cans of Jitters cold brew oatmeal lattes. The lattes were quite refreshing, worthy of a speedster superhero on the go. Be ready when popping the tops of these caffeinated beverages, as they will dramatically “whoosh” when opened.

While the Mother Box meal kit certainly provided an evening of culinary fun, it would have been nice if it had included more collector’s items. The magnetic jacket box itself is easily the most impressive piece of loot in this collection and offers a nerdy storage space for various knickknacks lying around the house.

The interactive AR feature of the Mother Box was fun even though the user interface is a little glitchy. There’s also a mini-game featured within the AR experience that enters the participant into a contest for a chance to win Wonderland At Home for a year. Aside from the Mother Box replica, the meal kit also comes with several Big Belly Burger boxes along with wax paper so DC fans can continue dressing their homemade burgers in the style of the DC Universe.

The beverage cans themselves are also well designed, but lose their display value the moment they are opened. The Superman ramekin would be a fun cooking utensil if I actually baked (which I don’t), while the Ocean Trench tin can is a sturdy prop that has literally nothing to do with Aquaman.

It’s definitely a fun meal kit, but the $130 price tag would be easier to swallow if the Mother Box came with exclusive merchandise that wasn’t made out of cardboard. Pick up your own here, and catch “Zack Snyder’s Justice League” on HBO Max.