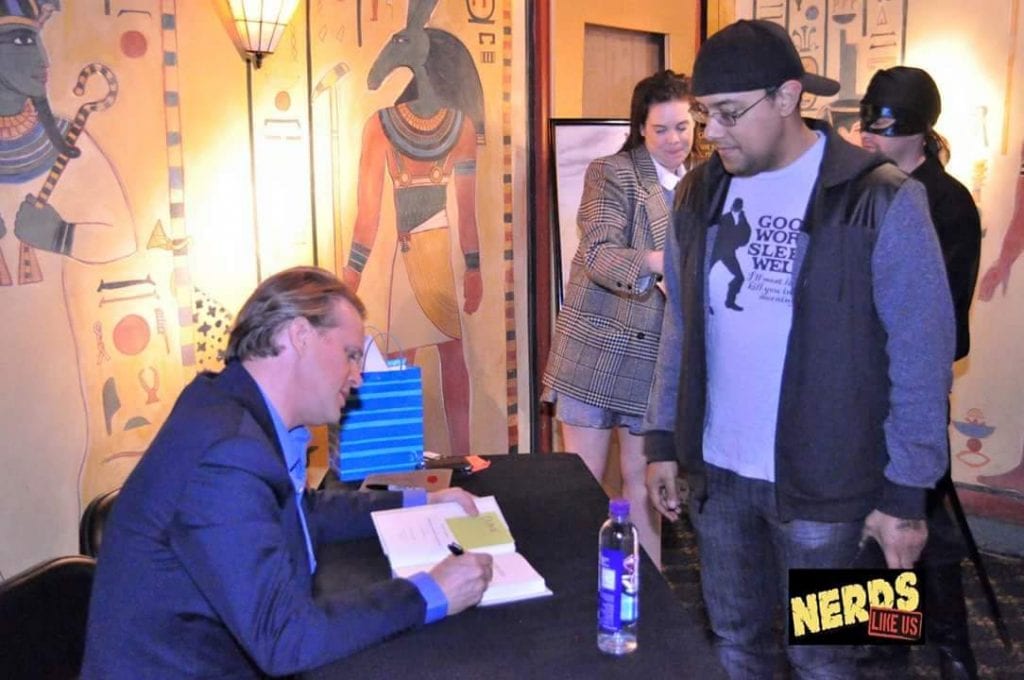 You Guys Remember That One Time I Met Cary Elwes?

In all my years of being on the outskirts of entertainment be it through stand up comedy, podcasting, nerd events or writing, I’ve rubbed shoulders with all kinds of celebrities. I’m by no means connected, and a majority of these encounters have been accidental and extremely brief. Over the years, I’ve had the pleasure of interviewing Tom Lennon twice, interviewing Special Effects legend Doug Jones, briefly chatting with Kevin Pollack in a movie theater lobby, meeting David Bradley at a breakfast buffet in Scotland, meeting Michael Rooker at LAX, recording a TV game show series for Hulu Hosted by Jay Mohr, and I used to go clubbing every weekend with a series regular on “Chicago Fire.”

Needless to say, I’ve had a number of experiences with a variety of celebrities, and I’m very rarely starstruck. I’m very big on not bothering celebrities when they’re clearly not in a place to be bothered, and even if I do approach them, I do my best to keep it brief and non invasive. Hell, I don’t have any proof I met David Bradley because it was clear that the man just wanted to get his blood pudding and sausage and enjoy his early morning breakfast. But meeting Cary Elwes stands out because it was one of the rare times I’ve actually been left speechless.

It was a private screening of “The Princess Bride,” one of my all time favorite films, and one of the rare films that I’m inclined to give a perfect 10 to (don’t @ me). The screening was also accompanied by book signing and meet and greet with Wesley himself, as well as a prescreening interview to share stories about his experiences filming the movie. Since I was considered media for the event, I was able to guarantee a spot in the front of the line and be one of the first people to meet him and get my book signed. I don’t know why this was such a big deal, but I won’t even lie and pretend like I wasn’t nervous to meet him for like 15 seconds max. I was wearing my Princess Bride shirt with Wesley pictured on it and the famous quote, “Good Work, sleep well, I’ll most likely kill you in the morning.” My colleague was dressed in a full Wesley cosplay, so ya we were about nerded out as you could possibly get.

We approached his table set up in the theater lobby and immediately I was taken aback by his kindness and grandeur. He’s much taller than you’d expect, and rather broad which surprised me. Elwes had an aura about him, one of a commanding presence but also a humble, kind man. I can honestly admit as a grown man, I swooned a little bit when I approached him and he said hello to me. There is genuinely something magnetic about him, and of all the celebrities I’ve met, this stands out the most even to this day. He was so genuine to every person that approached the table, and never showed an ounce fatigue despite the long line of fans waiting to meet him. He engaged every fan with the same life and joy as the last one, and it just made me appreciate him as a person and an actor even more.

The best part of this encounter was just how far he would go out of his way to give fans what they wanted. Upon seeing my colleague who approached him first, he was absolutely floored by how good his cosplay was. Unprompted, he asked my colleague to take a picture together WITH HIM, stood up from the table and took a picture. Elwes didn’t have to do that, but he did. Then he got to me. I complimented him on his work, he thanked me as he signed my books (I had to get one for my girlfriend who was unable to attend at the time) and then looked up and saw my shirt. Without hesitation he said, “That is a great shirt! Come over here!” He gestured me to come around the table, and without asking him to, he grabbed the bottom of the seam, pulled the shirt to stretch slightly, and signed it. I thanked him, shook his hand one last time and walked away still feeling the glow from meeting a true celebrity idol of mine. It was a truly memorable experience, and now that shirt is safely tucked away in a drawer and has not been warn since.

I know they say to never meet your heroes, and most of the time that statement rings true. But here, meeting Cary Elwes was a better experience than I ever could have imagined. He had no reason to go above and beyond or be that kind to anyone and yet, he welcomed every fan to meet him and gush out their love however they saw fit. He never placated anyone, never rushed anyone, and treated everyone with the kindness bursting from his gaze.

Cary Elwes ranks as one of the most pleasant and memorable celebrity encounters I’ve ever had. And it marks the one time I didn’t have to be used to disappointment.