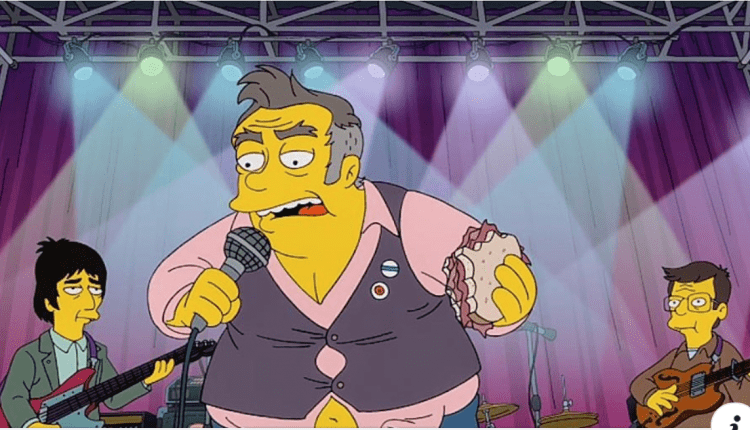 We need to first address that a statement posted on Morrissey’s official Facebook page is being touted as the singer’s direct quote. A follow up post on the same page corrects this, while also calling out various outlets for not doing due diligence to source the quote. TO BE FAIR, admin, anytime a page is “official,” that usually means, unless otherwise noted, that any posts are meant to come from the person/band/organization the page represents. The original quote was posted with NO attribution to Peter Katsis (who is Morrissey’s manager), but has been updated to add the name an hour later.

Last night, season 32 episode 19 of “The Simpsons” took a shot at Morrissey, voiced by Benedict Cumberbatch. The music for the lampooning was penned by Bret McKenzie (“Flight of the Conchords“). Several shots, actually. None of which were really off base or unfounded, considering just how batshit crazy Moz has gotten in the last two decades. Someone with access to Morrissey’s official fb page decided they needed to complain, very publicly.

“Surprising what a “turn for the worst” the writing for The Simpson’s tv show has taken in recent years. Sadly, The Simpson’s show started out creating great insight into the modern cultural experience, but has since degenerated to trying to capitalize on cheap controversy and expounding on vicious rumors. Poking fun at subjects is one thing. Other shows like SNL still do a great job at finding ways to inspire great satire. But when a show stoops so low to use harshly hateful tactics like showing the Morrissey character with his belly hanging out of his shirt (when he has never looked like that at any point in his career) makes you wonder who the real hurtful, racist group is here. Even worse – calling the Morrissey character out for being a racist, without pointing out any specific instances, offers nothing. It only serves to insult the artist. They should take that mirror and hold it up to themselves.Simpson’s actor Hank Azaria’s recent apology to the whole country of India for his role in upholding “structural racism” says it all. Unlike the character in the Simpson’s “Panic” episode…….Morrissey has never made a “cash grab”, hasn’t sued any people for their attacks, has never stopped performing great shows, and is still a serious vegan and strong supporter for animal rights. By suggesting all of the above in this episode…the Simpson’s hypocritical approach to their storyline says it all. Truly they are the only ones who have stopped creating, and have instead turned unapologetically hurtful and racist. Not surprising…… that The Simpsons viewership ratings have gone down so badly over recent years. – Peter Katsis“

And a followup, posted about an hour after that one started to get traction (again, with no admin’s signature on it).

More shoddy journalism by COS and Pitchfork today. They attributed my quote (on The Simpson’s poor writing) to Morrissey, while using false facts to try and support more meaningless stories More former journalistic press outlets now turning to the same tactics The Simpson’s used to gain attention.Other real papers, like Rolling Stone, called to ask who wrote the comment.Someone should tell COS and Pitchfork that is what is called “journalism”. In the meantime nobody has even mentioned the horrible false portrayal of Morrissey used by The Simpsons team. – Peter Katsis

Watch the episode if you’re a “The Simpsons” or The Smiths fan.

Moz now HAS issued an official statement via his website:

“This is my first comment (and hopefully my last) on The Simpsons’ episode – which I know has enraged many people. The hatred shown towards me from the creators of The Simpsons is obviously a taunting lawsuit, but one that requires more funding than I could possibly muster in order to make a challenge. Neither do I have a determined business squad of legal practitioners ready to pounce. I think this is generally understood and is the reason why I am so carelessly and noisily attacked. You are especially despised if your music affects people in a strong and beautiful way, since music is no longer required to. In fact, the worst thing you can do in 2021 is to lend a bit of strength to the lives of others. There is no place in modern music for anyone with strong emotions. Limitations have been placed on art, and no label will sign an artist who might answer back. Anyway, forgive me, we all know this because we can see how music – and the world in general, has become a mesmerizing mess, and we must let it go spinning along unbearably because free speech no longer exists. We all know this. In my case, nothing about my life has ever been matter-of-fact; nothing about my songs has ever been matter-of-fact … so why would they now be? Since my very first interview several decades ago I have lived with horrible accusations to such a degree that it is generally understood that ‘this is how we write about Morrissey’. In other words, I’m quite used to it. I’ve had enough horror thrown at me that would kill off a herd of bison. Accusations usually come from someone with a crazed desire for importance; they don’t operate at a very high level. Writing for The Simpsons, for example, evidently requires only complete ignorance. But all of these things are too easy for me to say. In a world obsessed with Hate Laws, there are none that protect me. Often, the scandal sheets (do we STILL refer to them as ‘news’papers?) attempt to psychologically wound an artist, and then, hopefully stir up enough hatred against that artist so that s/he is physically wounded. False theories of race are now the most common (and boring) aspect of all criticism, and will continue to be so until accusations of racism are in themselves illicit. I have watched ‘Smiths fans’ being attacked by the UK press on the grounds that ‘Smiths fans’ are too backward to understand the person that I am; I have watched the modern Morrissey audience be ridiculed by the UK press with the belief that they, too, couldn’t possibly know who I am, and I have lost several high-profile friends because they could no longer live with the night and day harassment from British journalists who are suicidally anguished because they cannot urge the people around me to drum up tell-tale incidents of racism. This battle fatigue I face alone, although I am very grateful to the writer Fiona Dodwell for her eloquent appraisals of the victimization that now automatically associates with my name, and on which The Simpsons latest episode feasts.
People continually ask me why I do not retaliate – especially following the Sky Sports open slander. The answer is explained in the first few lines of this comment. Life is difficult and you must face it on your own, and even with the impossible-to-imagine legal artillary, everything can be repaired … except the human heart.

It is easier for me not to go on. You know I couldn’t last.”