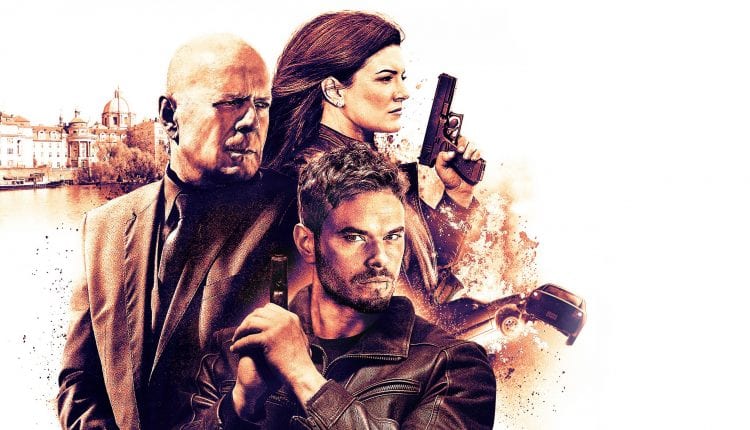 I don’t expect anyone to have any clue what movie this is when they hear “Extraction,” as it’s a pretty common movie title and this is far from the most interesting or most searched film bearing that name. Not to be confused with the Chris Hemsworth vehicle of 2020 on Netflix, a far superior film, THIS “Extraction” stars younger, budget counterpart Kellan Lutz, and Bruce Willis.

Billed as action thriller, it has very little thrills and even worse action. It hits just about every checkmark of bad filmmaking, down to its messy, incoherent narrative and script to its sepia color pallets and clearly low budget shaky cam drone shots. I don’t know what it is about bad films, but my god do they love sepia filter over sweeping landscapes. Everything is yellow and dimly lit, which services nothing considering the poor acting and even worse writing. “Extraction” is everything you would come to expect from a low budget action film starring (kind of but more on that later) an aging action star, and furthers the question of how films like this KEEP getting made.

Directed by Steven C. Miller (a staple of this kind of production which we’ll address later) and starring Lutz, Willis, and Gina Carano, “Extraction” tells the story of CIA operative who seeks to be like his father, a decorated field agent. After being rejected for field duty four times in a row, his father is abducted by terrorists unknown and a world ending technology is at stake. Against the directives of his superiors, Harry decides to go after his father on his own, and with the help of former fling Victoria who is assigned to bring him in, he will uncover a plot deeper than he ever thought possible and hopefully save the world and his father in the process.

If the synopsis of “Extraction” sounds eerily familiar, that’s because it operates under the most basic of action thriller tropes. It does so poorly and with the most limited of imagination, sacrificing just about everything in regards to logic and purpose for a few cool shots that should be more fun to watch than they actually are. Everything in “Extraction” works like a collection of story board points already mapped out based on the genre rather than the context of the story, and the narrative written to connect those pieces came afterwards. Is there a car chase? Of course. Is there a useless bar fight against a biker gang that doesn’t take too kindly to pretty dude faces? Well, ya of course there is. Is there a nightclub scene? Can’t have action movie without one, right? Double cross? Super secret spy stuff involving satellites and Russians? Old flames out of nowhere because we need to pretend these actors of have chemistry? Check, check, and check. “Extraction” is what someone THINKS an action movie is suppose to be, and ends up being void of anything interesting to add to the genre.

As it turns out, there’s a perfectly good explanation as to why this movie exists and why someone like Bruce Willis and D.B Sweeney is in it. The answer is producer Randall Emmett, who has championed the Geezer Teaser genre of action films for the last 20 years. Geezer Teaser action films have had one hell of a run since the rise of streaming services began to dominated the media space. In an earlier time, these films would be direct to video flicks that sat on the shelf with little fanfare and wouldn’t be more than a write off and go largely unnoticed. This would probably make them difficult to produce in the days of physical media, but streaming has made things like “Extraction” not only possible, but have given them a platform to thrive. They’re aptly named Geezer Teasers because the often include aging action stars of the 80s and 90s who spend all of 10 to 15 minutes on screen but get top billing and are used as the primary marketing of the film. It’s this genre of film where actors like Willis, Steven Seagal and even Sylvester Stallone have thrived for year, turning in a few days of filming for an astronomical paycheck.

Joshua Hunt has a fantastic article about the Geezer Teaser that describes the ins and outs of Hollywood, Emmett’s influence and shady business dealings, and why guys like Willis show up in films like “Extraction.” You can read his piece here. His well researched article greatly influenced my viewing of this film, more so than any review ever could. It puts this whole genre of film into perspective, and also opened up a treasure trove of bad action films that qualify for this series. “Extraction” is a prime example of what dirty money can buy in Hollywood, and is a prime example of what happens when you use an old guy to sell your film whether he’s actually relevant to it or in it for longer than a blink and you miss him appearance.

“Extraction” is the kind of film that makes you wonder just how in the world espionage can be so damn boring. Nothing happens with purpose or reason, and every scene is consistently disjointed from its connecting ones. It’s just things happening without any rhyme or reason, and is never elevated by the poor script and even worse acting. Here’s the thing: I’m actually not sold on the idea that Kellan Lutz is a bad actor. His filmography says otherwise, but I think this is a result of him being Hollywood’s next “It” guy and never really being given the chance to do what he wants. He’s constantly thrust into a “This role is gonna make you star!” only for it to be another big or mid budget dud. This is one of those few times where I don’t blame the actor so much as the circumstances involving the roles he’s typecast in. He doesn’t have enough clout to sit them out, so he’s the face of the failed pretty boy experiment. By contrast, Gina Carano proves that she’s best when she doesn’t speak. That’s not a slight at women or whatever you want to say about her political stances either. She’s honestly just not a good actress, and it’s never more apparent than in things like “Extraction.” Everything is wooden and stilted, and Carano is incapable of making a bad script sellable as a passable one.

The problem with “Extraction” and why it more than deserves its 6% rating on Rotten Tomatoes is that it can’t really be fixed. By its nature, it hits just about every action trope possible in the genre, and while you could make the argument that a better script or better actors could potentially make it watchable, I’m inclined to believe that without the Emmett money behind, this script would’ve remained unsold and unmade even today. No legitimate producer or studio would greenlight “Extraction” without it, leaving me to believe that it not only deserves its low rating, but that this is the absolute best it can be and I mean that in the pejorative way possible.

There are a lot of terrible things to watch on Amazon Prime. Don’t let “Extraction” be one of them.

Disneyland Provides List Of Available Rides When They Reopen