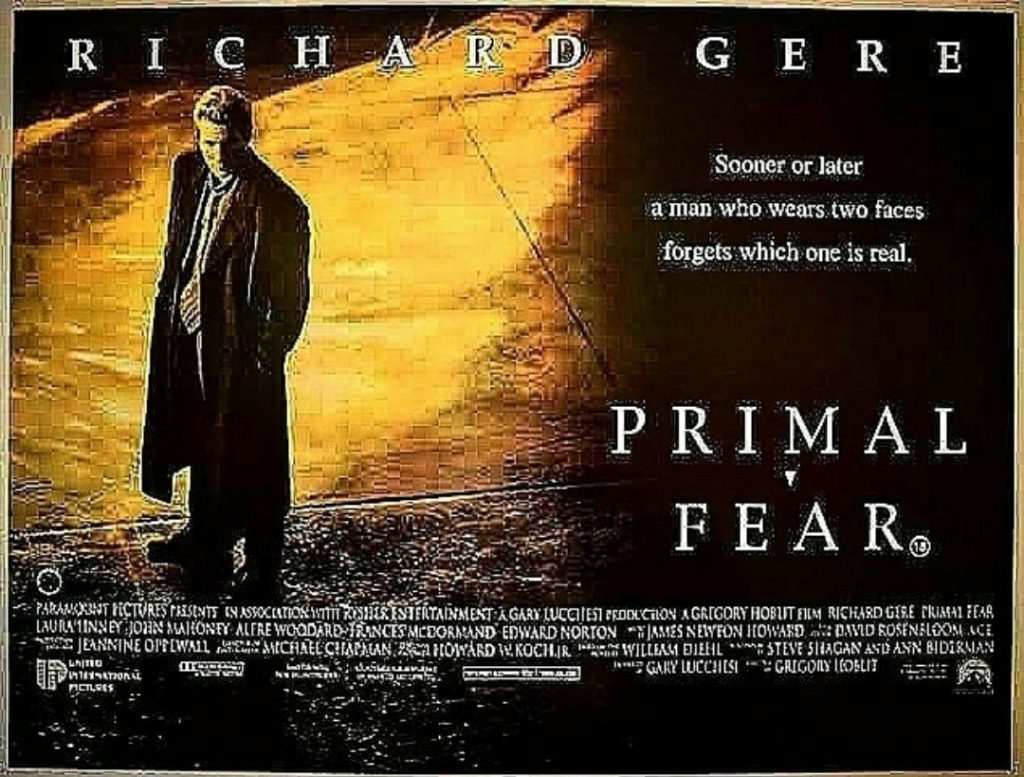 It is always refreshing when I get the opportunity to review a film I love so much I could probably review it from memory. It doesn’t happen often, but “Primal Fear” is perhaps one of my all time favorite crime thrillers that I never grow tired of watching. This is the first of many compliments to the film, considering the hook of “Primal Fear” is its twist ending. Films with these kinds of twists as the crux of their appeal rarely have rewatch value, as anyone who’s watch any M. Night Shyamalan film can attest to. That’s not say something like “The Sixth Sense” isn’t a good movie, just that it’s not nearly as enjoyable once you know its ending (and Shyamalan has forced me to watch “The Last Airbender” twice now, so if that criticism seems specifically spiteful, that’s why). Powered by its straightforward crime thriller/court drama story tell and superb cast, “Primal Fear” not only manages to remain relevant 25 years later but also makes its claim as one of the best films in its genre.

I’ll be honest, this is probably going to be more me gushing about how good “Primal Fear” is and why you should see as opposed to an actual review of its overall film composition. The truth is, the film gets so much right its hard to articulate all the ways that it does, likewise even harder to highlight the few things it gets wrong. While no film is perfect, “Primal Fear” hides most of its faults behind its strengths, making them more of nitpicks than outright issues. It’s paced and balanced well enough to overshadow any misgivings you may have about court proceedings and medical examinations, allowing the thrill of the cat and mouse game created to simmer slowly until it boils over in its final moments. For every “that’s not how it would’ve happened,” there’s a “whoa, I can’t believe that just happened!” All of these moments contribute to making “Primal Fear” so damn good.

“Primal Fear” is a strong example of how a stellar cast who breaths three dimensional life into every character can elevate a rather basic, straight forward plot into a must see film for any crime thriller fan. On its surface, “Primal Fear” is nothing more than a murder mystery. A young boy is charged with the murder of a powerful priest, a hot shot lawyer signs up to defend him, and (stop me if you’ve heard this one) powerful people in bed with the prosecution try to hide the misdeeds of the victim from being exposed in the trial. Of course, the young boy has some issues of his own that complicate the proceedings; he suffers from multiple personality disorder and one personality doesn’t know the other committed the murder.

On paper, this is pretty standard crime thriller storytelling. Even if you were take the twist ending into account, there’s nothing that necessarily makes it unique. What does separate “Primal Fear” is its performances. The film introduces the world to Edward Norton, this being his very first foray into the Hollywood and his first feature film role ever. It’s hard to believe, but “Primal Fear” is truly Norton’s first time out, earning himself an Academy Award Nomination and a Golden Globe win for it. Wrap your mind around that for a second. Norton has only been acting for 25 years. His performance in “Primal Fear” is a testament as to why is skyrocketed so quickly, and is most certainly deserving of praise. Norton is believable in every facet of his character, be it naive, stuttering Aaron Sampson or hard edged, aggressive Roy. This is crucial to the effectiveness of the film, as the entirety of its success rests on the viewer believing the Aaron/Roy personality split. Norton nails it, and proves why he has continued to have a long standing career ever since.

Likewise, Richard Gere as hot shot lawyer Martin Vail turns in one of the best performances of his career, adding nuanced layers to an otherwise one dimensional caricature. It would be very easy to phone this one in; be nothing but larger than life and smug at all costs. Gere humanizes Vail, adding facets of personality that make him both likable and despicable, and forces the viewer to root for and against him as the film unfolds. We love to hate him and hate to love him, which is more than what his character should be and the film is all the better for it. Additionally, Laura Linney and as prosecutor Janet Venable also layers her character far more than what she seems to be on paper, again bringing a gravitas and purpose to Venable beyond the typical cutthroat, win at all costs prosecutor. Linney is great here, and compliments Gere beautifully both in court and out of it as they dance around their complicated personal history together. Everyone here seems to understand that the more they bring to the table the better “Primal Fear” will be for it, and props to Gregory Hoblit (director) for letting them. It would’ve been very easy to force his actors to scale it down a bit to fit the pages. Instead, Hoblit lets his actors do what they want and define their characters on their own, and “Primal Fear” is all the better for this.

“Primal Fear” slowly simmers the drama beneath and never throttles ahead too fast, letting the events of the crime and everyone involved come together piece by piece. By the time the reveal finally comes, viewers are so invested in every part of the trial it makes the final moments hit that much harder. It also allows audiences to enjoy the film regardless of its shocking conclusion, as every character is captivating enough to watch and is indefinitely changed by the events of the trial. “Primal Fear” is a damn good courtroom thriller that also happens to have one of the best endings in the genre.

I think I’ve done well enough to not give the ending away in case you haven’t seen “Primal Fear.” I am rarely concerned with spoilers for a film that is decades old and, prior to the dominance of streaming, could be found on AMC at least once a week. But for the holdouts who have some how managed to miss this one, I am opting to not give away everything here. It really is that good, and deserves to be viewed for the first time without knowing how it all ends.

This was a lot of words to basically tell you to watch “Primal Fear.” It’s great.