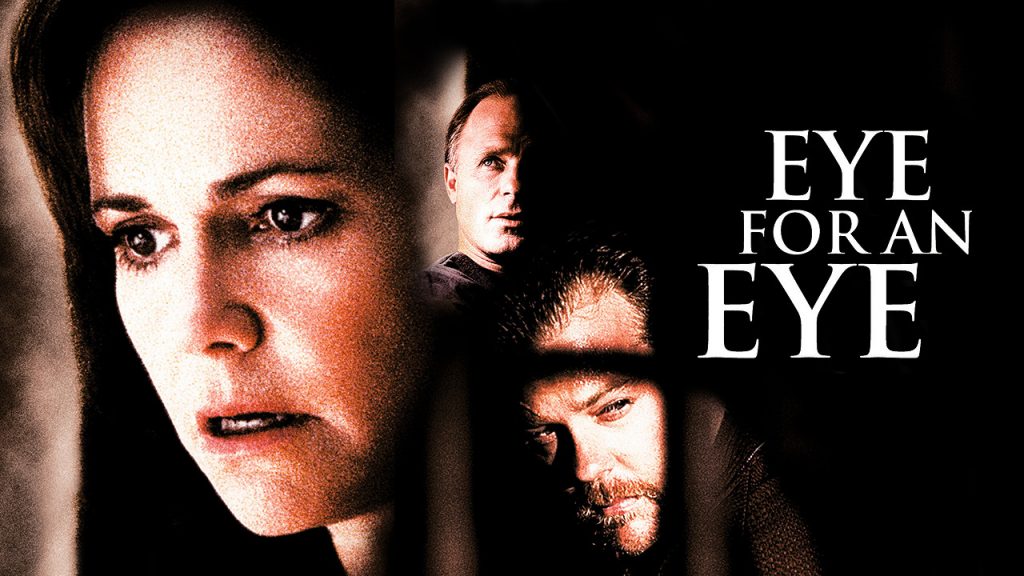 As someone with an unhealthy obsession with true crime and serial killers, “Eye for an Eye” (1996) is exactly the kind of revenge thriller I should have in top recommendations. On paper, it has the basic layout of a run of the mill mom turned revenge huntress. With its star studded cast, this should’ve been a no brainer for any fan of the genre. Unfortunately, “Eye For an Eye” executes its thin premise so poorly it feels exploitive, desperate to manipulate the emotional rollercoaster of a parent’s worst nightmare with a payoff that feels more shallow than cathartic.

Directed by acclaimed director John Schlesinger (of “Midnight Cowboy” fame), “Eye for an Eye” is about mother Karen, who’s daughter is brutally attacked and murdered while preparing for her younger sister’s birthday party. Through some legal loopholes, the prime suspect is set free without any charges. Unable to accept the results of the criminal justice system, Karen decides to take matters into her own hands, tracking her daughter’s killers every move and learning more and more about what it will take to finally get him off the street before he strikes again.

“Eye for an Eye” reiterates the January-February movie release slump. It’s simply not good, and seems in equipped or unwilling to deal with anything beyond its most basic premise, thus stretching it beyond its means and making it an incredibly unpleasant experience. Seriously, “Eye for an Eye” is uncomfortable to watch for all the wrong reasons. You should empathize with Karen (Sally Field) and what she’s going through, but instead it feels more like your watching one cringing emotional torture scene after another. You just want it be over for the sake of it reaching its inevitable conclusion like an endurance test. Look, I sat through “Funny Games” which was wretched by design, so for this movie to inadvertently conjure up similar emotional responses is NOT a compliment.

The film wants to try to grapple with things like grief, revenge, criminal justice, and morally gray retribution but is never willing to explore them beyond anything other than just existing by nature of the plot. When dealing with a brutal death of a family member at the hands a psychopath who’s able to walk free, these things MUST be examined beyond mentioned. Otherwise you’re left with a brutal and dreary revenge story that can’t handle the answers to its own questions. This also makes the time gaps and tonal shifts all the more glaring, with Field’s going from distraught mother seeing evil at every turn to back to work without a hitch in the blink of an eye.

Ironically, this is the second time Kiefer Sutherland has appeared in a film as a sexually sadistic, sociopathic serial killer of women in a single month. I don’t know that having a knack for this sort of thing is a compliment, but it just goes to show that before he was saving the world every day in “24” he was quite literally the chaos in it. He does bad very well, but outside of him there’s a lot of wasted talent here including Field herself. It’s more the material than her actual performance, but she also doesn’t do much with what she’s given to elevate it in anyway. Likewise, Ed Harris and Beverly D’Angelo, both accomplished actors in their own right might as well be anybody. Because the film refuses to explore any of the themes presented, these characters (and the actors) could be deleted from the film over all and it wouldn’t change anything.

Overall, “Eye for an Eye” is a mean-spirited endeavor that never quite hits the right beats of its own genre. It’s narratively messy and doubles down on all the wrong things, never digging deeper beyond the conjured up desire to murder the murderer. Furthermore, you can gather the entire plot from start to finish from the trailer, making the need to watch “Eye for an Eye” obsolete. And considering just how brutal and uncomfortable that watch is, you’re better off avoiding this one altogether.