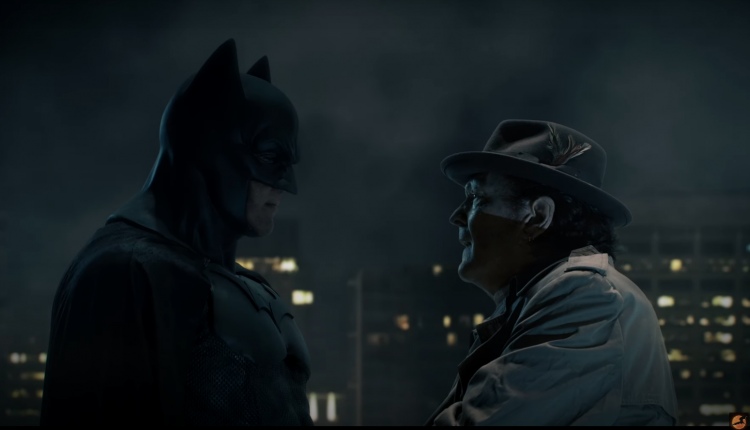 Bat In The Sun always has the most amazing productions for their videos, we just wanted to say that first and foremost. The newest Batman-adjacent episode (which has no correlation to any Warner Bros. Pictures official projects) is without a doubt, awesome.

Featuring Michael Madsen as Gotham PD Detective Harvey Bullock, the one and only Doug Jones as The Riddler, Kevin Porter as Batman, and Aaron Schoenke (who also directed this episode) as The Joker, you’ve got to check out “Batman: Dying is Easy.”

Porter said of the role:

“I love to kick, kick, punch, punch, punch-kick, punch, roll around. I love wearing the cape, love all of that, but what i mostly love is because I’m an actor I love dialogue and I love character driven projects and this is exactly what I’ve always wanted. I’ve played Batman for, gosh, coming on twenty years now, and I’ve been so blessed to have done it with the Bat in the Sun guys. Now this is something that pursues Batman in a way that’s never been seen before, as the detective….I think this is the project that we’re going to pull out all the stops and we’re going to portray the characters exactly as you, the fans, have always wanted to see them because we’ve always wanted to see them (that way) as well.”

“The characters are so rich in their back stories and their psychology that just to have the two characters interact and go back and forth about what makes them tick is just so fascinating. I don’t think we’ve ever really seen that in live-action.”