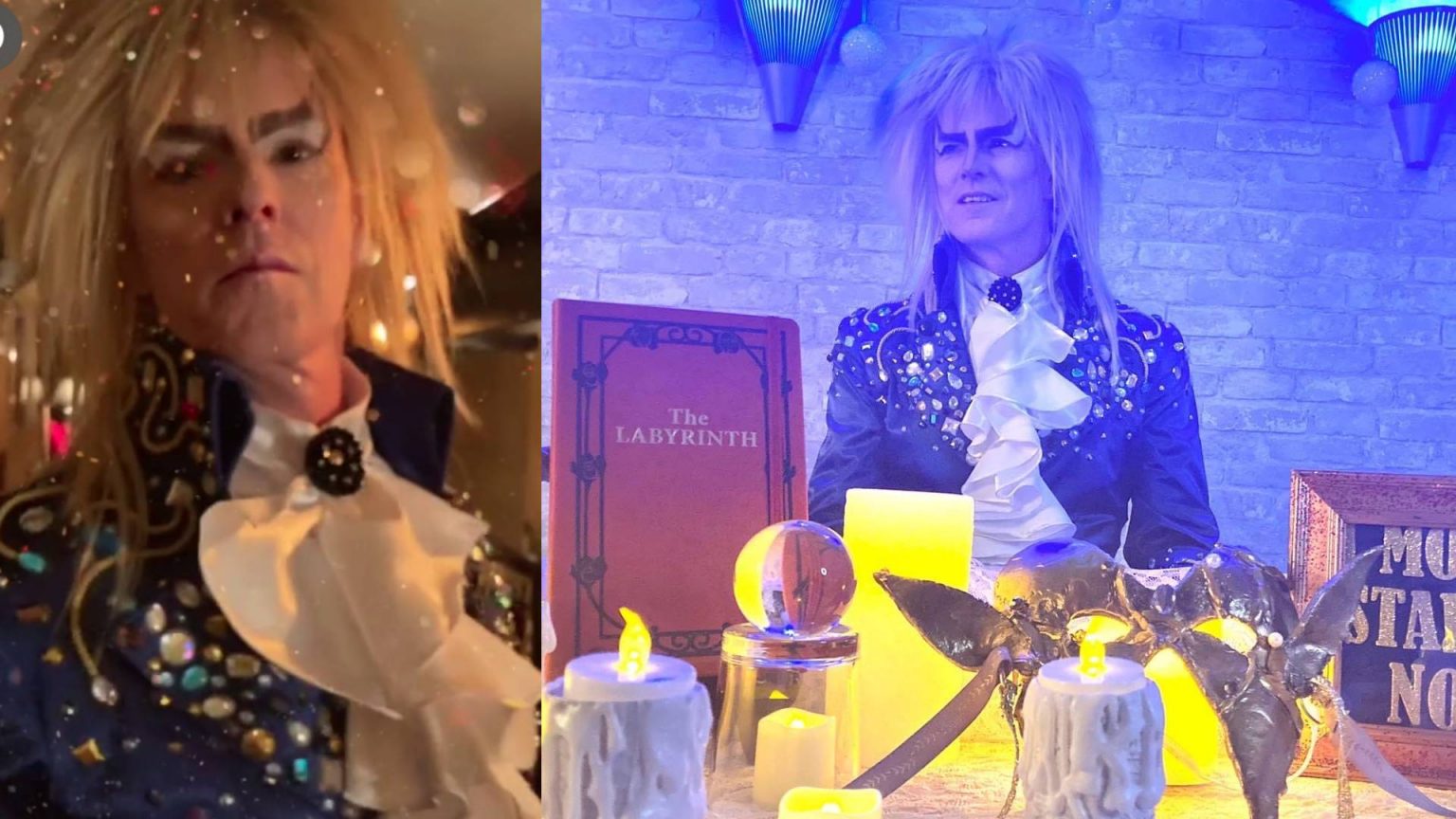 My first introduction to Serious Moonlight was through their amazing video on TikTok. It’s rare that you see a well done Jareth cosplay that not only has all the clothing down perfect but also oozes aesthetic. Dan Gerics Jareth the Goblin King video quickly blew up and wow’d not just us 80s babies, but the younger crowd as well.

I don’t know if it’s the song chosen or the confidence you can see Gerics exude as he walks away from the camera but this has to be one of my favorite cosplays of the character. Now sitting at over 268 thousand views the video has properly gone viral, just as you would expect Jareth the Goblin King to do.

I was able to speak with Dan a bit about his company Serious Moonlight, and ask him a few questions about his work portraying David Bowie.

Q: How did you come about dressing up as Jareth the Goblin King?

A: Jareth came about by necessity and follower demand. It started in summer of 2019 with the conception of a David Bowie tribute act. My wife and I came up with it and decided on the name Serious Moonlight – Bowie Tribute. I got to work learning Bowie’s music, put together a band, and started rehearsing. 2020 was to be our inaugural season but ALL of our shows got cancelled due to Covid. So I turned to social media to keep the act active. I got moderate action until one Jareth video took off. Now Jareth is what tiktok responds to most. I still do non Jareth stuff, but the Goblin King gets the most traction. I occasionally do tiktok lives so as to keep performing. Those are solo shows; Serious Moonlight – Unplugged. SM-BT can be booked as a full stage show with the full band or solo.

Q: How did David Bowie’s death affect you?

A: Few celebrity deaths have affected me as much as Bowie’s. My daughter’s first movie in an actual theatre was “Labyrinth“. About ten years later she got to be a goblin in a shadowcast production of the show at the same theatre. This was through my wife’s company, later named The Goblin King Players. (I was not Jareth in this production, my wife Kristina was.)** Because of this connection Bowie’s passing was a blow to my family.

As for me, I saw the Lazarus video a few days before he died and cried for two days. It was clear he was saying goodbye. Then he passed and as sad as that was I felt the closure had already begun. His death and work right up until the last minute exemplified the level of commitment to his craft most artists strive for. He could have retired several times over but didn’t. He worked literally until the end. Strangely this made the sad occasion of his death an inspirational moment for me.

Q: What do you hope people take away from your portrayal of him? Do you hope to introduce more young people to the iconic legend?

A: I want people to join me in celebrating the man’s music and iconic characters. His “rock n roll with lipstick on” (John Lennon) had an incredible impact on pop music, fashion, LGBTQIA+ pride, and many other social issues/movements, whether he meant it to or not. Not to mention, his song f***ing slap!

As for new generations, tiktok as shown me that plenty of  young people are already fans of Bowie, largely from the character Jareth from the movie “Labyrinth“. Many started there then checked out his catalogue and became fans of his other characters. Others are just obsessed with the film. I’m thrilled if I can help create new fans, though. I’ve already experienced that generational magic drumming as Ringo in a Beatles tribute called Toppermost. Many shows were attended by families representing three or four generations all rockin’ out with us. I hope to do the same with Serious Moonlight.

Q: What are your personal favorite Bowie songs?

A: “Moonage Daydream” and “Life on Mars.” Ask me again tomorrow and the answer will ch ch ch ch change. 🙂

Q: Any chance we could see a “Magic Dance” video in the future?

A: There are a few Dance Magic Dance videos on my tiktok but there will definitely be more! Once we get some live shows booked you’ll see it in that form. I plan to do a full solo piano version as well.

Serious Moonlight- A Labyrinth Celebration will be back at the Redford Theatre, where it all began, when we join with the Goblin King Players for a Labyrinth Celebration, Aug 13, 14, 2021. The band will open, then they’ll show the movie and have a sing along! Audience members are encouraged to dress up!

Then Nov 19 they will give a full concert on the Redford stage with special guest Tim Cappello, the sexy sax man from the movie The Lost Boys!

For business inquiries such as booking a shout(similar to Cameo) out you can contact them by clicking the link here.