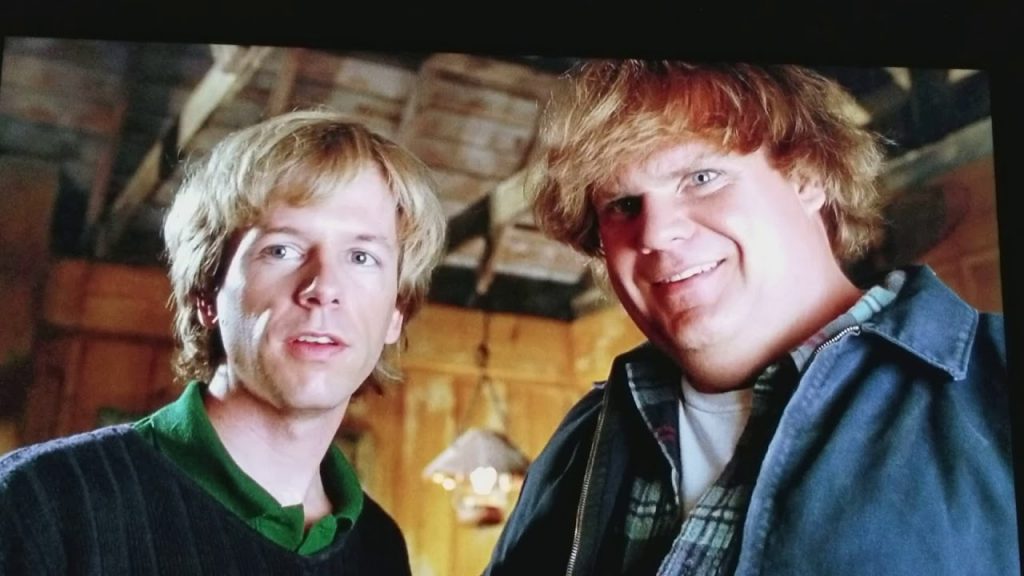 Full Disclosure: I had no intention of doing two schtick 90s comedies back to back. I actually had an entirely different film picked out for this week (which I may still do) but as I was scrolling through February releases from 1996, “Black Sheep” suddenly stuck out as the right film to do. Maybe because both Adam Sandler and Chris Farley are, for all intents and purposes, schtick comics who for most of their career stayed on brand.

Perhaps it’s also that both men are the last remnants of dying breed; SNL cast members transitioning their characters into film and becoming comic legends. That isn’t to say that “Saturday Night Live” cast members of today don’t go on to have long, successful film careers, but none of them in the last 20 years have been able to follow the path of the early days, where cast members lifted their sketches from quick bits to feature length films that rinsed and repeated until they were beloved enough to start branching out into other projects.

I maintain that Farley would have most certainly followed in Sandler’s footsteps, and while his limited filmography is still very much within the scope of his manic slapstick comedy style, I believe he had all the talent in the world to become a more subdued version of himself and deliver terrific, nuanced performances. Sadly, we will never be privy to what could have been, but I’d like to think that would be the case here.

“Black Sheep” is also fitting because both Sandler and Farley define late 90s comedy, with Farley leaving a definitive mark on the culture of his time despite his life being tragically cut short. In 8 years, Farely appeared in 10 films, only 4 of which actually starred him. The rest are all scene stealing cameos in other SNL cast member’s films. Whether you like him or not, it most certainly says something about his screen presence; to have that little to your name (SNL notwithstanding) and still be regarded as one of the most beloved comedic actors of his time. Look, Farley was by no means a comic for everyone, and there are just as many people that disliked at him as loved him (fun fact: Siskel and Ebert HATED him, eviscerating “Black Sheep“ and then tried to back track their harsh critiques of his works after he passed), but Farley is without a doubt the very definition of late 90s comedy. “Black Sheep” is by no means a good film, but it is inexplicably tied to the culture of its time, and though far from Farley’s best work, it is a reminder of just how good he was at what he did.

Beat for beat, shot for shot, joke for joke, it is merely a vehicle to unite the odd pairing of Farley and Spade without having to work too hard to do so. Think “Pocahontas” and “Avatar,” where one actually works to reimagine the tale while the other goes “wouldn’t it be cooler if it was blue aliens and everything was in 3D?” That’s pretty much what’s happening here in “Black Sheep.” Someone watched “Tommy Boy” and said “Wouldn’t it be funny if it was political instead of industrial and they were in the woods instead of on the road?”

I’m not going to sit here and necessarily defend all the failings and lack of effort of “Black Sheep,” but I will stand by the Farley/Spade formula. I don’t even really care for David Spade as an actor or comedian, but something about over the top manic explosions juxtaposed with extreme sarcasm and snark just works. Even in a half baked vehicle like “Black Sheep” the duo are still very much at home together. Hell, you probably don’t remember very much from the film overall, but I’ll bet you remember classic likes like “I got dibs on top!” and of course, “kill whitey!” And then there’s Chris Farley, waking up to take in the wonderful morning nature of the woods and plummeting down the side of a mountain. Slapstick? yes. Downright ridiculous? absolutely. But funny as hell every single time? You damn right it is.

See, “Black Sheep” forces me to contend with the elitist film critic snob that resides in me when I put pen to paper and the child like joy of laughing at even the most basic of jokes. I’ve said this before, but there’s a reason dick and fart jokes still exist and continue to be the back bone of most comedy. The cleverest and wittiest comedies out there simply shroud them in eloquence and buzzwords, and just because it’s a smart dick joke doesn’t make it better than the obvious, unabashed and uncensored one. Slapstick and schtick aren’t for everyone, but they are still most certainly for many or they wouldn’t still exist in the first place. My point is, there’s no real reason to get indignant over “Black Sheep.” It simply doesn’t have to be more than what it ever was meant to be in the first place: “Tommy Boy 2.”

And that’s fine. Really, it’s fine. You don’t have to like “Black Sheep,” and frankly, it’s not really a good movie even if we go with the “Tommy Boy 2” premise. “Tommy Boy” is by far the better of the two, with more heart and more coherency and charm, but you can’t really fault “Black Sheep” for taking a stab at what worked again. Why not? Hindsight is 2020, and we know now that the Farley/Spade combo was suppose to be the new thing that would carry both men into the early 2000s. It falls so early on in Farley’s career that you can’t really even hold anyone accountable for not trying to push the limits of what he should do comedically. It would be very naive to assume that this was meant to be the last attempt at the same formula. That it was is attributed to extenuating circumstances stands unrelated to the film’s composition and reception overall.

It’s easy to have been critically harsh on “Black Sheep” when the mindset was that this was just another entry into a large cannon of Farley/Spade buddy comedies. And to be fair, in that regard “Black Sheep” isn’t good. It’s not as good as its predecessor and it most certainly leaves many viewers, both fans and critics alike wanting a much better vehicle for the two. But we never got it, and so we’re left with “Black Sheep” as their last pairing on screen.

So while this has been more of a critical analysis on Farley and his short career than it has been a review of “Black Sheep,” I’ll end with the challenge to ease up on the film looking back. It doesn’t deserve a pass entirely, but it should certainly be reframed through different lenses, because while it is unimaginative and rather derivative in its approach, “Black Sheep” has some genuinely funny moments that iconized Chris Farley as the best at doing what he does. And if nothing else, who’s life couldn’t be a little better with some Gary Busey as a crazed, forest dwelling Vietnam vet?

No? That doesn’t do it for you? Ok, whatever the point is, “Black Sheep” is funnier than you remember even if it’s as deservingly forgettable and critically dismissed. And since I don’t think “kill whitey” is the best way to end a review, I’m just gonna leaving you with one of my all time favorite quotes from “Black Sheep” with no context or clever word play.

“Well it’s kind of easy to win when you NEVER MOVE YOUR BACK ROW!”