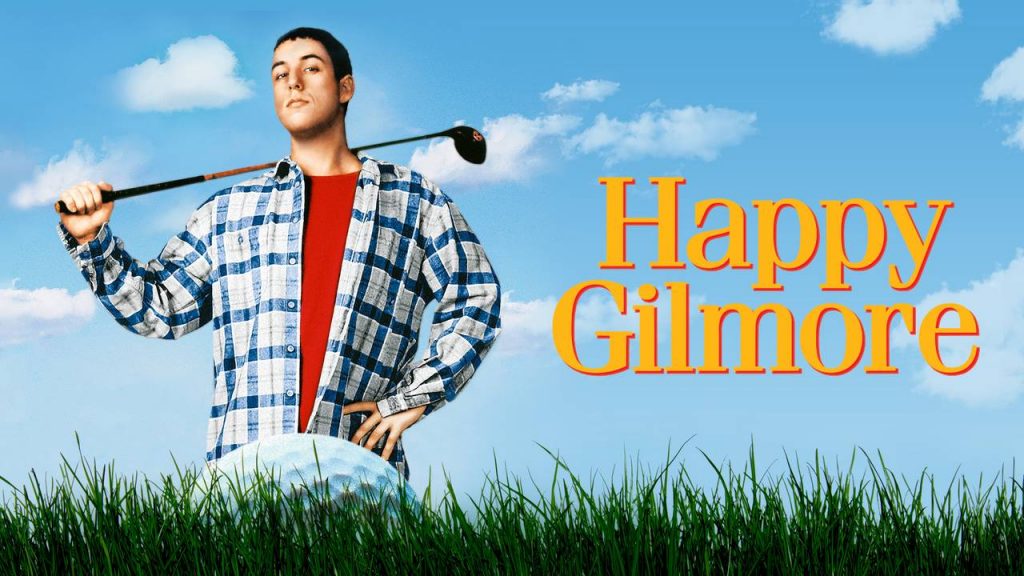 When it comes to Adam Sandler films, it helps to organize them into 4 distinct categories: The manchild, the subdued comedian, the “did you know Adam Sandler can act?,” and whatever the hell he’s doing at Netflix.

“Happy Gilmore” surprisingly falls into the second category. This is surprising for two reasons: it falls directly in the middle of his man child 90s run and because prior to this most recent viewing, I had mistakenly equated it with “Billy Madison.” In the 25 years since its release, I have held to the idea that “Happy Gilmore” and “Billy Madison” are essentially the same film, but they are not. They are distinctly different as far as my Sandler categorizations go, and “Happy Gilmore” is the better for it, turning out to be an enjoyable rewatched misjudged by its viewer.

Before we unpack “Happy Gilmore” on its own merits, let’s get a few things out of the way. First of all, I am not a fan of man child Adam Sandler. Yes, I am aware that he is genuinely a good person in real life, supports his friends and local businesses, does 90% of the work himself which is why he has unfettered access to creating whatever he wants, AND that there’s certainly an audience for all of it. Me? Not so much. I’m a fan of the subdued comedian like “The Wedding Singer,” “Big Daddy,” and “50 First Dates,” as well as his very successful turn as a dramatic actor in things like “Reign Over Me,” “Punch Drunk Love” and “Uncut Gems.” Everything else in his repertoire borders on being unwatchable. It wasn’t always the case, but things like “Billy Madison,” “Little Nicky” and “Don’t Mess with Zohan” do not age well and do nothing for me.

This is all to juxtapose my dislike for a majority of Sandler’s work against my genuine enjoyment of “Happy Gilmore.” Far more subdued than I remember, the film turns Sandler down from 11 to about a 7.5, which in turn dials up his charm and likability factors and makes for a solid, enjoyable entry into the Sandler canon. It’s really weird reviewing films more on the actor in them rather than the film itself, but (especially when speaking in retrospect with 25 years of films to weigh against) it’s simply impossible to do so. Sandler, for better or worse, leaves a distinct mark on films, practically creating an entire film genre unto himself that has yet to be duplicated with the same amount of success and longevity.

By that standard, “Happy Gilmore” sports a solid supporting cast including perfect elitist villain Christopher McDonald as Shooter McGavin (Gilmore’s golf rival), a young Julie Bowen of “Modern Family” fame as Virginia Venit (Gilmore’s Love Interest), and Carl Weathers as Chubbs Peterson (Gilmore’s golf mentor). Fun casting fact: McDonald actually turned down the role initially, unwilling to play yet another villain role. Bruce Campbell lobbied hard for the part, but McDonald eventually said yes so long as he had the freedom to do what he wanted with the character (which he did) leading to most of his performance being improvised. And we can’t talk about “Happy Gilmore” without at least mentioning the most memorable Bob Barker cameo of all time, winning an MTV Award for best fight with Sandler.

Look, for all the childish sketch style antics and slapstick humor in “Happy Gilmore,” it’s actually more clever than people often give it credit for. Yes, it’s very much a Sandler movie in the best and worst of ways, and yes, it’s far fetched and down right cartoonish at times. But at its core, “Happy Gilmore” still manages to function as a solid sports hero story, one centering on an underdog with a hidden talent that ends up becoming a fish out of water but in the end discovers what truly matters and to use those talents for good. In yet another layer, “Happy Gilmore” also pokes fun at the sport of golf along the way, contrasting the outlandish, wild antics of hockey with the quiet, often times elitist snobbery associated with the sport itself. It does this without taking away from the difficulty of the sport itself, forcing our hero to learn the nuances of the game instead of just slapshotting his way to victory.

Whether or not “Happy Gilmore” does this on purpose or by accident is a different story altogether, one I’m not going to get into here. For now, let’s just say that “Happy Gilmore” is better than I expected it to be and better than it probably should be. It demonstrates that even early on, Sandler and Co were more than capable of balancing their comedic “National Lampoon’s” antics with a well told, well made story, packed with memorable scenes and strong performances from very likable characters. Is the best Sandler film? No. It’s not even the best in its aforementioned category of subdued comedian, which I would argue that it’s follow up “The Wedding Singer” holds that mantle.

Sidenote: That’s a helluva start to a solo film career, huh? In 4 years, he made 5 films, all of which are typically argued as being the sole reason Adam Sandler exists today. Image getting your shot and you go out and make “Billy Madison,” “Happy Gilmore,” “The Wedding Singer,” “The Waterboy,” and “Big Daddy” back to back to back. That’s a helluva run no matter how you feel about him.

Sorry, I know this is suppose to be a review of “Happy Gilmore” but as stated, the film is defined more so by the lead actor than the film itself. That’s not necessarily fair, but that’s the world that Sandler has created for himself and the lens in which we view “Happy Gilmore.” They are inexplicably tied to one another, and both are better for it. If you haven’t seen it in a while and you have even the slightest inclining of love for Sandler films, I’d actually recommend “Happy Gilmore” far more than ever thought I would. It’s funny, silly, well acted, and overall a pretty solid albeit implausible film.

Consider “Happy Gilmore” is your home. Are you too good for your home?