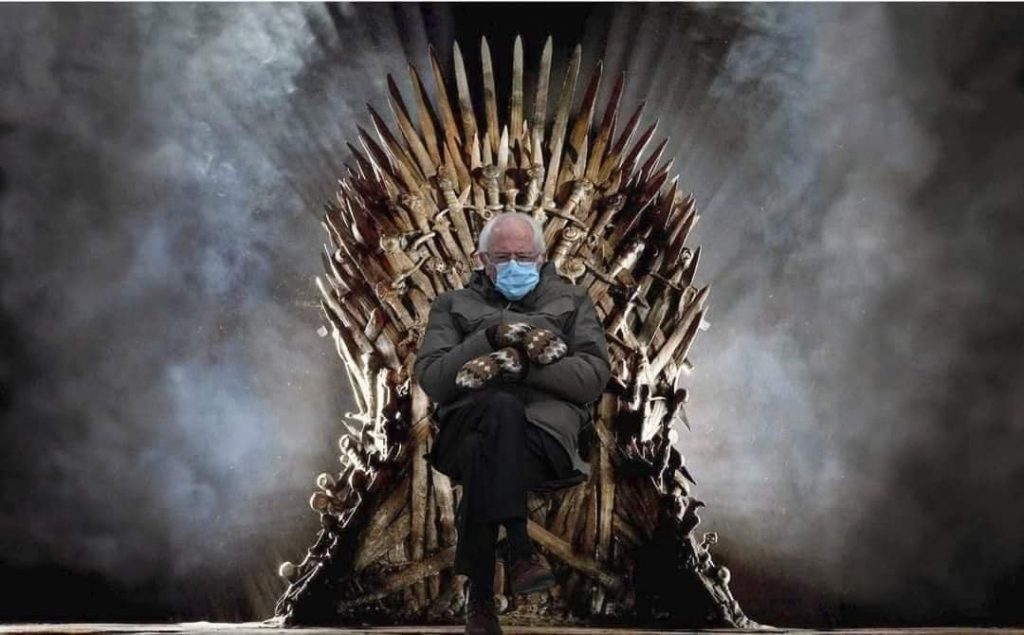 This weeks’ inauguration was a highly anticipated event for everyone. Coming off a 2 week rollercoaster that rivaled most of 2020 in the beginning of 2021, there was a lot of expectations for what would transpire when the new administration officially took over. But no one, not even the predictive “The Simpsons” could’ve predicted that Bernie Sanders would end up becoming the star of the entire ceremony. Huddled in a puff jacket with homemade mittens and a grumpy old man scowl that could be seen even through his mask, the “Bernie sits here” immediately took the internet by storm and has not let up since.

[Editor’s note: “The Simpsons” did indeed predict several parts of the inauguration, including Vice President Kamala Harris‘s fetching purple suit and signature pearls ala President Lisa Simpson, who takes over the office and a sizable budget issue from Presdient Trump. Remember how ridiculous that seemed in 2000?]

Who could’ve guessed that Vermont Senator and former Presidential hopeful Salty Sanders would be the thing to bring our nation together? I have seen so many of these it’s truly difficult to narrow it down to a true best of Bernie. It is relentless, and is proof that internet is and will always remain undefeated. For the sake of this collection, I’ve tried to limit it to the best of nerd related Bernie memes, steering clear of more politically driven ones and focusing on ones we can just all enjoy. Here are a few of my favorites.

As someone who has recently visited and seen the Mona Lisa within the last two years, this one instantly became a personal favorite of mine. Witness art, perfected.

This Bernie meme just goes to show you that there is truly no limit to what you can do with him if you put your mind to it. Aside from this just being hilarious, this gets extra points for its incredible animation.

I know we all SAY we miss cons so much since the pandemic, but no meme has ever captured what having a booth at a con is really like quite like this one here. The accuracy!

I absolutely cackled when I saw this one. Megazord Sanders may come close to being my absolute favorite, as I’ve looked at it for 24 hours and it’s still funny to me.

Even before we started photoshopping him into literally everything, the tried and true meme format still worked and held strong. We all want to be around people until we have to actually be around people. Also, this is me at every single party ever.

This one gets me in so many different ways. I love Bernie memes, I love “The Office,” and somehow Bernie looks EXACTLY as you would expect him to listening to Michael Scott.

There’s not a lot missing from “Hamilton.” That is until Bernie Sanders hit the internet; now I can’t imagine the show without him. Cabinet Battles just aren’t the same without Sanders judging them.

Gryffindor? Slytherin? Ravenclaw? I never imagined trying to decide where the sorting hat would put Sanders, but now it consumes my ever waking thought.

I don’t watch anime, so I couldn’t even tell you which one this is from. But I know it’s good, so it makes the list.

Be honest, you sang the entire intro the minute you saw this? The real question is, who’s going to be first to one to rewrite the song to fit the meme?

This is the buddy cop movie we didn’t know we needed. But now that I know it exist, I’m kind of hoping Sanders quits politics and joins this reboot.

This is why the internet exists; Book Of Bernie! Exploring Medicare for All and treacherous adventures of Student Loan Debt Cancellation!

Bernie getting added into the classic pottery scene in “Ghost.”

And Bernie being added into the classic “settle in for this” gif with Jason Momoa.

Even some celebrities got in on the fun, like Jamie Lee Curtis and her “True Lies” version of the meme.

Mark Hamill has the best collection of “Star Wars” Bernies.

And the Mayor of Flavortown himself- Guy Fieri.

There are so many more than included here. The option are endless, and it is genuinely shocking how many we were able to create in such a short period of time. I’ve seen multiple folders with 100+ memes and none of them are same in any album.

Turns out when we all come together, the internet can be a fun, hilarious place.

Senator Sanders stopped by “Late Night with Seth Meyers” and actually commented on the memes.