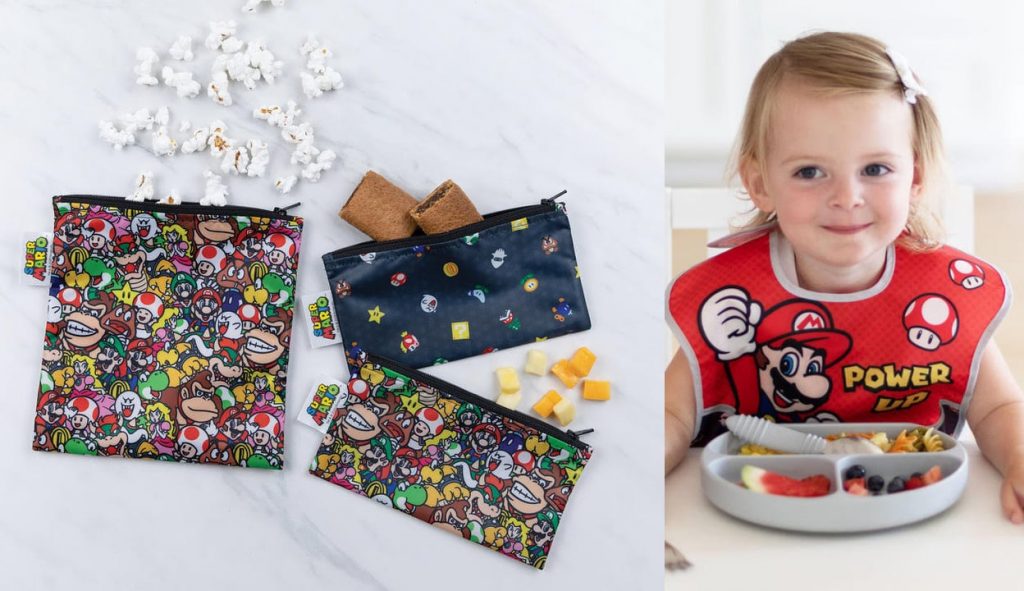 Power Up Your Parenting with Bumkins Super Mario Baby Gear

When I decided to have a baby this year, I knew it was going to be tough. Not because of the pandemic, but because my first daughter was already six. That means that a lot of her old baby stuff I had already gotten rid of or was too old to use. Bibs, teethers, bags and accessories were long gone. So when I saw that Bumkins had some really cool nerdy baby gear I was elated to know that #2 would be rocking it Nintendo style.

The first thing I saw was their Legend of Zelda baby gear. But for me it’s always been Mario that’s captured my heart. Bumkins has their first set of Mario baby gear available now. But they’ve also expanded into the 16-bit era which is when I remember shining the most brightly.

Bumkins was dear enough to send me a package of some of the new designs which will be available for purchase starting December 1st. Here are some of the things they sent over.

They sent over bibs, a silicone grip dish and utensils, a splat mat, snack bags, a wet bag and some teethers. Now Emily isn’t old enough to sit up yet only being shy of two months, but we have gotten great use out of the splat mat for tummy time. and of course the cat had to claim it for himself as well.

The splat mat is a great tool for tummy time because when I used it she took about 5 minutes and then spit up. It wipes away so easily that I won’t be using anything else for it. Usually I put down a blanket which I then have to wash and it creates laundry. With this it was as simple as wiping away and setting her back down.

The wet bag is a hero because it has a snap on it so you can attach it to your stroller. The wet bag can be used for anything from spit rags to dirty diapers if you aren’t near a trash receptacle. Which is great because that means you aren’t putting the dirty diaper back into your diaper bag where you may be keeping other things you don’t want stinky.

The clear bags I have to admit I kept for myself. I can’t tell you how often I’m digging around trying to find something in my purse, but since these have windows I can just pull it right out. I’ve been keeping the pacifiers in them because for some reason those things disappear as often as a lost sock. I also want to make a note for any mom who’s packing their hospital bag that these would be great to put makeup or other things in. I bought plain plastic sleeves and put little travel shampoo bottles in mine. But had I known that I could have gotten these and kept them to use after baby as well I would have.

The bibs with crumb pockets come in two designs, this one and the pattern included with the splat mat. These are easily wipeable and washable and won’t mildew or get crusty food on them. That’s the main advantage to using plastic over cloth. Plus with these cute designs you won’t miss them when you go to look for them.

You can check out their entire line of Officially Licensed Super Mario baby accessories by clicking the link here. Christmas is coming, and it would be a great gift for any future gamer’s stocking. Plus a great gift for mom and dad as well.