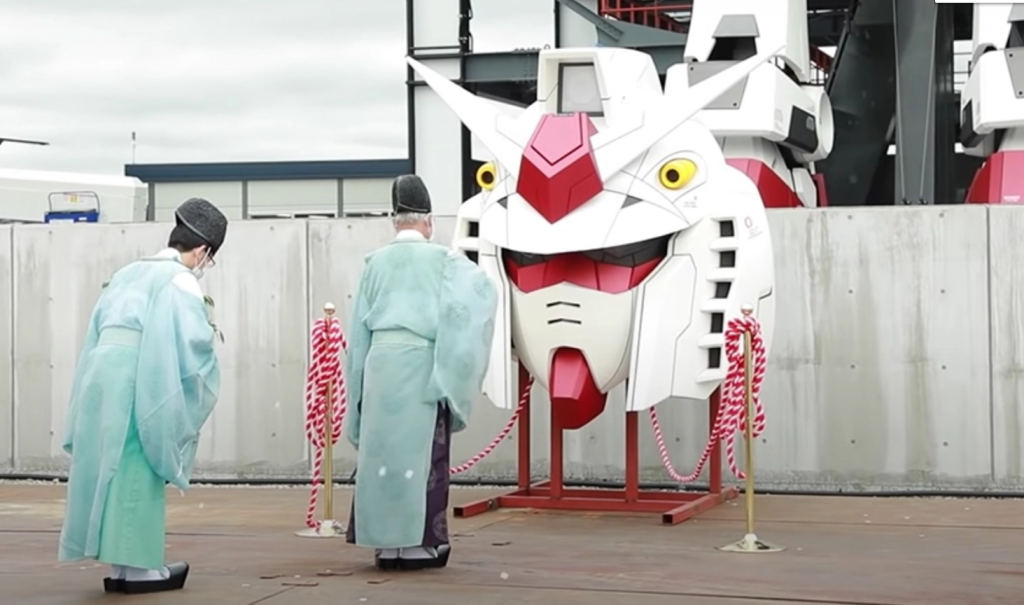 On June 29th there was reportedly quite the ceremony for the RX-78F00 GUNDAM in Japan. A few Shinto priests blessed the giant mech’s head.

When it took it’s first steps a few weeks ago, you may have noticed it was headless. Well that was because they were waiting for a blessing!

Why would a Shinto Priest bless a giant gundam? Well most likely it was to discourage evil spirits from inhabiting it. I mean, can you imagine if this thing were to become possessed? Luckily no real weapons or lasers have been installed but you get the idea. There have been way too many movies and shows where technology goes awry.

The monument to gundams was set to debut in Japan this October and last until October 2021. But due to COVID it may last a bit longer since they also wanted it as a tourist attraction. While you may be able to visit it in October if you are a resident in Japan, they will be postponing the official opening until further notice.

On site they will be selling special gundam kits to commemorate the celebration. There will also be a tour available of the factory which will include:

■ACADEMY An exhibit facility where you can learn about the Moving Gundam design, construction, and structure. You can enjoy the various technologies used to move the Gundam while learning about them too.

■THE GUNDAM BASE YOKOHAMA Satellite With a focus on venue-limited gunpla, it is a shop space that sells various original goods.

■GUNDAM Cafe YOKOHAMA Satellite A cafe with a Gundam-related original menu and where you can enjoy local Yokohama cuisine.

So while it’s not open yet to tourists you may want to plan on seeing this if you are able to travel to Japan.