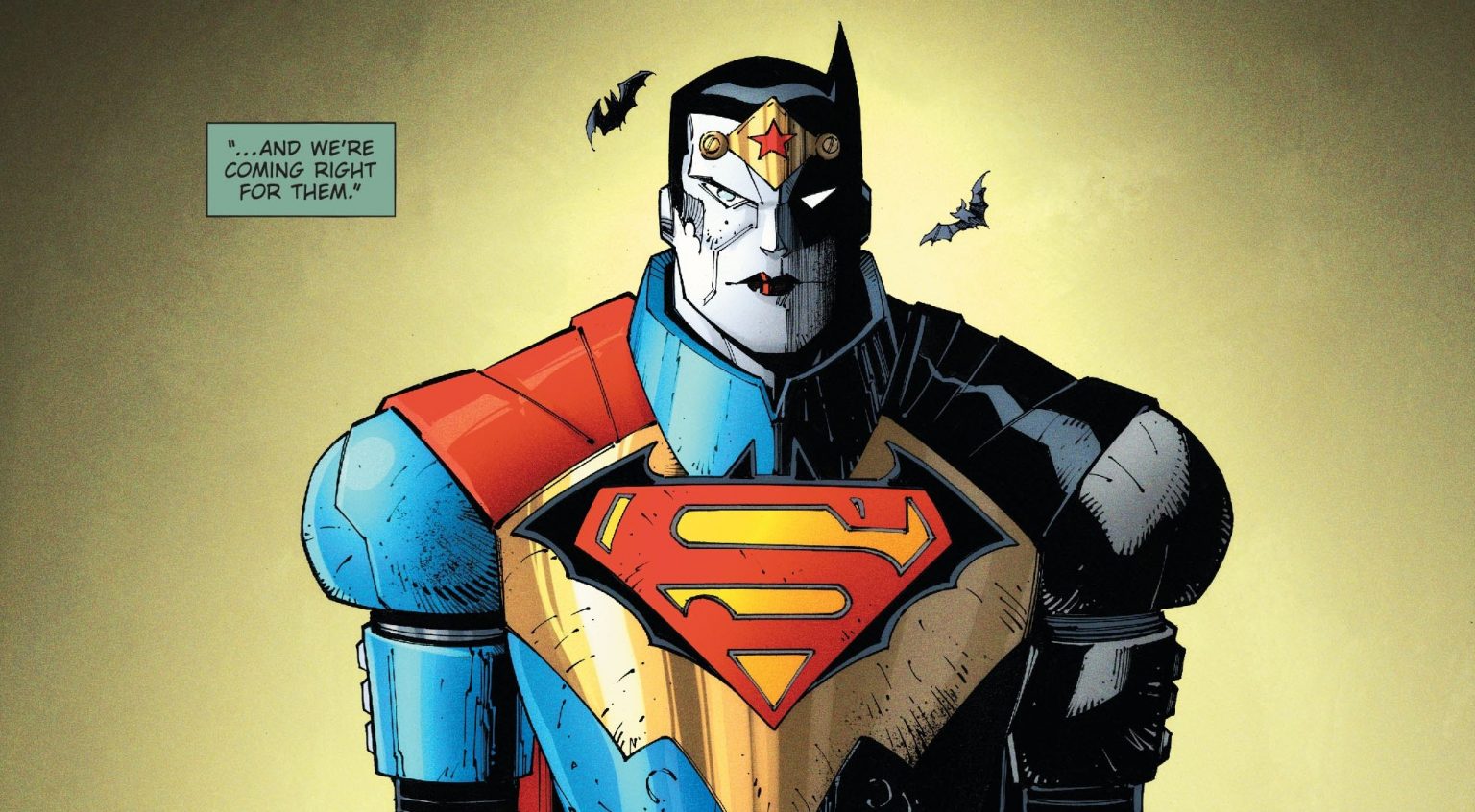 The Second Issue of Scott Synder and Greg Capullos delve into the dark multiverse, “Dark Knight : Death Metal“, was just dropped this week

In the last Issue we saw Batman and his Black Lantern ring, Wonder Woman and the invisible chainsaw of truth, and Superman on the run and infected with the anit-life virus. It ended with Diana taking down the Batman Who Laughs(BWL), fleeing the area with Wally West and Plant Thing in tow.

So with full SPOILERS ahead, lets get into this weeks issue.

The issue opens up with short commentary by Sgt. Rock, saying that although some may want our heroes to go straight into action, their going to take their time and work their way towards victory. Then a Bat themed Captain Atom is run over by a monster truck caring our fleeing heroes.

The group makes it to the Hellscape (formerly known as Washington DC.) and head over to Batmans headquarters. There they meet up with members of the Justice Society of America : Allen Scott Green Lantern, Wildcat, Jay Garrick the Flash, and Doctor Fate.While Diana tries to convince Batman that they can save the universe, Bruce starkly believes that it cannon be done and that they have to save what little they have left.

Batman eventually decided to believe in Wonder Womans plans, which involve rescuing friends from New Apokolips, travel through the Dark Multiverse to the original crisis, use that energy to power up Wally West and then he’ll destroy Perpetua and restart the universe.

We then switch over to Castle Bat where the Batman Who Laughs is resurrected in a body made of pure energy. He checks in with Perpetua who only has six universe left to take over. BWL then destroyed all the minions around him aside from one Robin whom he seemed to be interested in. He then takes on a new all black form and declares himself, the “Darkest Knight”.

They arrive at a Bunker Batman had built after their fight with Barbatos that houses all of the Toymans inventions. The party gets into a Robot with the symbols of Wonder Woman, Superman and Batman and blast off to New Apokolips to rescue their allies.

While the first issue was used to establish the situation, this one is formatted to be transitional. We know what the main plan is and now we’re on our way to enact it. Aside from the “special” robin introduced and the appearance of the JSA, there wasn’t any major surprises in the book.

In part one, it was established that this mini series would be filled with just chaotic fun, and the introduction of the Super-Wonder-Bat robot delivers said fun.

Even though this event, and its origins, are Bat Related – I’m getting the vibe that the MVP of this book may be Wonder Woman. While I’m excited to see what Wally West can do, her steel strong hope and perseverance is what is keeping them together right now.

If there’s a lingering thought hanging on after reading this issue it’s this ; where is Superman ? Hopefully we can see what he’s been up too since we are visiting New Apokolips.

If you liked the issue, let us know! Did it make you excited for more Death Metal or are you regretting spending money on another issue ? Leave your opinion in the comments down below.