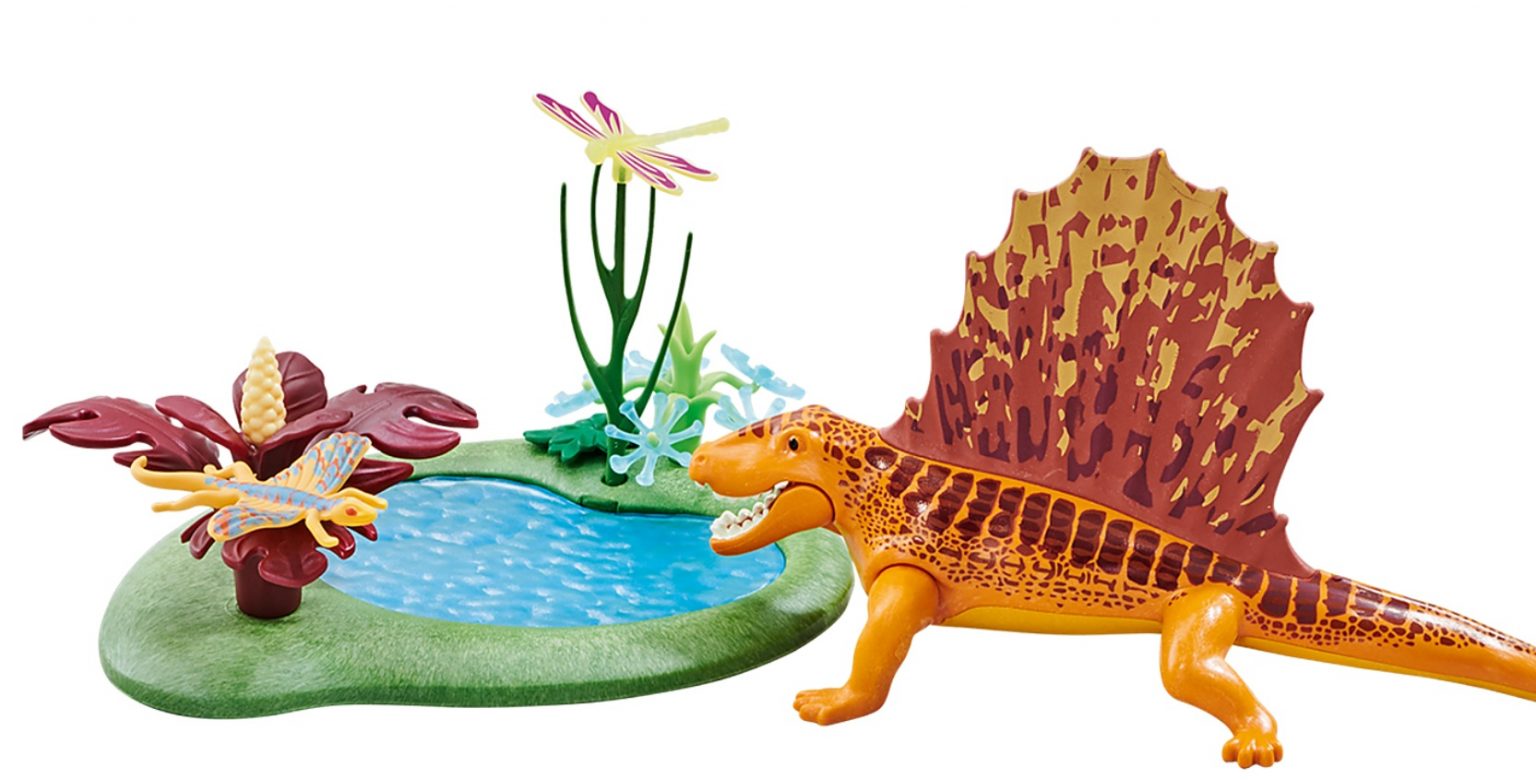 Playmobil – Europe’s other big toy company that isn’t LEGO – has been making toys since the 1970’s. Playmobil doesn’t quite have the big name recognition in the US as most of the other brands, and a lot of the places you’ll find them are “next to the LEGO” or in “educational” toy stores. That’s a shame, though, because Playmobil makes some cool stuff.

I probably haven’t owned a Playmobil toy since I was 4 or 5, but I randomly came across their line of semi-realistic ancient animals. That brings us to this cool toy: The Playmobil Dimetrodon with Pond (Item 6596).

I ordered mine online from a retailer and it came in a bag. I assume at the store there’d be a box but hey, that’s fine. It’s easier to ship in a bag. It’s your standard toy that needs to be party assembled: several bags in a bag/box. The Dimetrodon is complete, but the pond needs to be put together following some easy instuctions.

When complete, the entire thing is pretty cool. Whoever designs these goes above and beyond to at least make everything seem sort of time period correct. One MINOR gripe is that flowering plants, like the little blue flowered guy, likely didn’t appear until after dimetrodon was extinct but that’s so minor no normal person would notice. The other 2 plants fit right in, one looking like an extinct whisk fern and the other some kind of cycad.

The two neat additions are the extinct giant dragonfly and the gliding lizard. We have living gliding lizards – the Daco genus in Asia – and there are several extinct groups of lizards and lizard-like reptiles that also used their ribs to glide (Icarosaurus, Xianglong). It’s am minor, cool feature that didn’t need to be included but I am glad it was.

His/her jaws open and close and the front legs move. That’s about it. Overall, I can’t point to anything wrong about the figure, which is a big win for a cartoony animal toy of an extinct creature. The skull has the right sloping shape and the stance looks accurate. I can’t comment on the colors because I don’t have a time machine, but they certainly pop. The only weird choice that is likely a child safety one is that the sail on the back is rubbery. If a kid plays with this too much or it gets left in the sun, I imagine that sail can be damaged.

It’s a pretty awesome toy for a kid or adult who either likes extinct animals or wants a cool base for display. My only real complains are that the Dimetrodon’s back legs and tail don’t move, so there is really only one post this guy can do. Still, for around $15 bucks US, you can skip a couple of cups of coffee or a beer and get this for yourself or the kids. I would avoid giving it to really small kids or kids who like to stick things in their ears/mouths, though. It’s a 4 and up toy but some 4 and 5 year old kids may still manage to get the plants or dragonfly in an ear or nose.