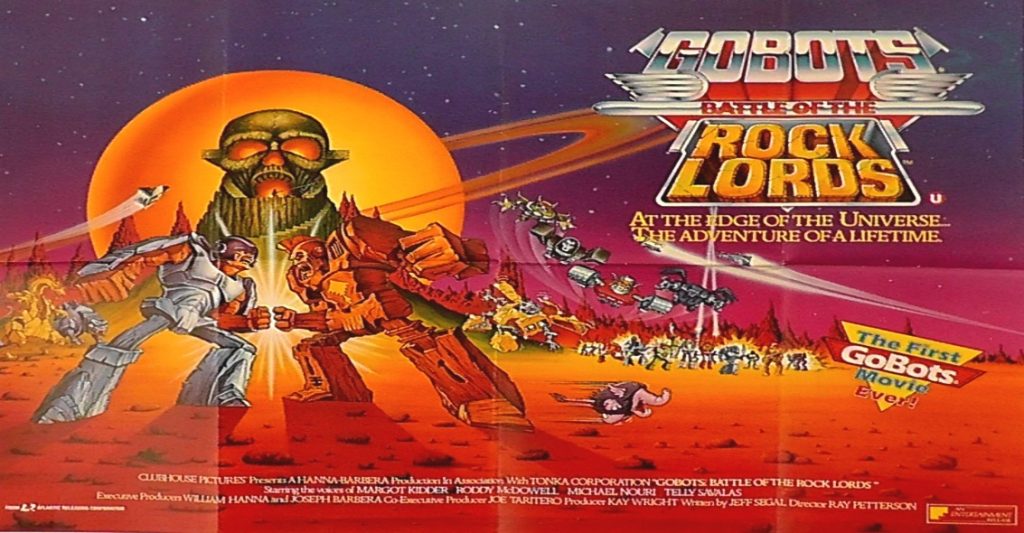 Toys aren’t really a thing anymore. Sure, there are some toys but video games and other media devices have largely displaced toys. Toys R Us is gone. KB toys is dead. The toy section of stores is mostly tumbleweeds.

But there was a time when action figures, dolls, and games stood tall.

Disney wanted to know what would happen if a mad scientist created hideous creature hybrids but also liked kawaii stuff. Yes, this is a forgotten Disney idea. The animated series came went with a blink but the toys hung around stores for a little longer. The star was Bumblelion.

Was Bumblelion… A) a cute bumblebee lion or B) an aging bear who listens to K-Pop?

Mattel saw the bloated toy market with the successful Teenage Mutant Ninja Turtles line and thought to themselves: What can we do that’s cheap crap but also like the Ninja Turtles? Food fighters!

If you love the idea of violent military combat but you are a furry and less of a foodie, have I got an idea for you! Barnyard Commandos!

Playmates, who already had the Ninja Turtles, needed a Ninja Turtle ripoff just in case Raph and Don stopped selling toys. So they did what any sane and sober person would do: got high (probably) and came up with the idea that pigs and sheep should be locked in mortal combat. The idea was as if someone had seen the Crib Notes for Animal Farm but never read them. If you vaguely remember these toys it was probably from the Burger King premiums.

Boglins were creepy little monster puppets made by Mattel in the late-80’s and early-90’s. If you remember Gremlins, Critters, Ghoulies, and the millions of little monsters in 80’s movie, Boglins are basically ripped off from that. The toys were actually created by some folks who started at the Jim Henson Company, that shows in their design and rubbery puppet bodies. Be aware though that if you the tactile feel of rubbery puppets, they aren’t for you.

Tonka, American distributor of the GoBots, combined 2 things no kids loved: The transforming rock dudes from He-Man and the colors of actual rocks. Each character was supposed to be some real rock – amber, granite, tungsten – but in actuality they were all kind of lumpy robots that became lumpy rocks. The best Rock Lords were the rocks that turned into bony dinosaur-monster-things. That at least felt like a cool fossil toy.

Hot Looks were the 80’s version of Brats dolls.

Whereas Barbie was supposed to be a weirdly proportioned adult human, Hot Looks were teenagers. The dolls were more like plushies with plastic heads. The core series were girls from various country in sometimes kind of racist outfits – USA, Australia, Japan, etc. – and had a variety of outfits you could buy separately because capitalism. If you want a doll that’s made out of stocking material with a soulless, plastic head, Hot Looks is your line of choice.

If you answered sort of weird guys riding skateboards, you win! Kenner was running out of ideas and steam in 1991, so they made skateboards because kids love skateboards. Then they stuck little collector figure dudes on top that were vaguely weird or vaguely gross, like an eyeball holding what looks like a sex toy or a green hedgehog monster. They were kind of fun… kind of fun TO THE EXTREME!

Tyco saw My Little Pony and wanted to get some of that sweet sweet pony money. What’s cooler than a pony? DINOSAURS! ALWAYS DINOSAURS! And so Little Miss Dinosaur was born. It is exactly what you think it is. Cute little dinosaurs have long hair that can be brushed for some reason. They come on the classic discount store packaging that looks super flimsy. If you grew up with My Little Pony or are Bronie, this might be your next long-forgotten-toy-fetish.

Which of these weird, forgotten toys is your favorite? Let Nerdbot know in the comments!