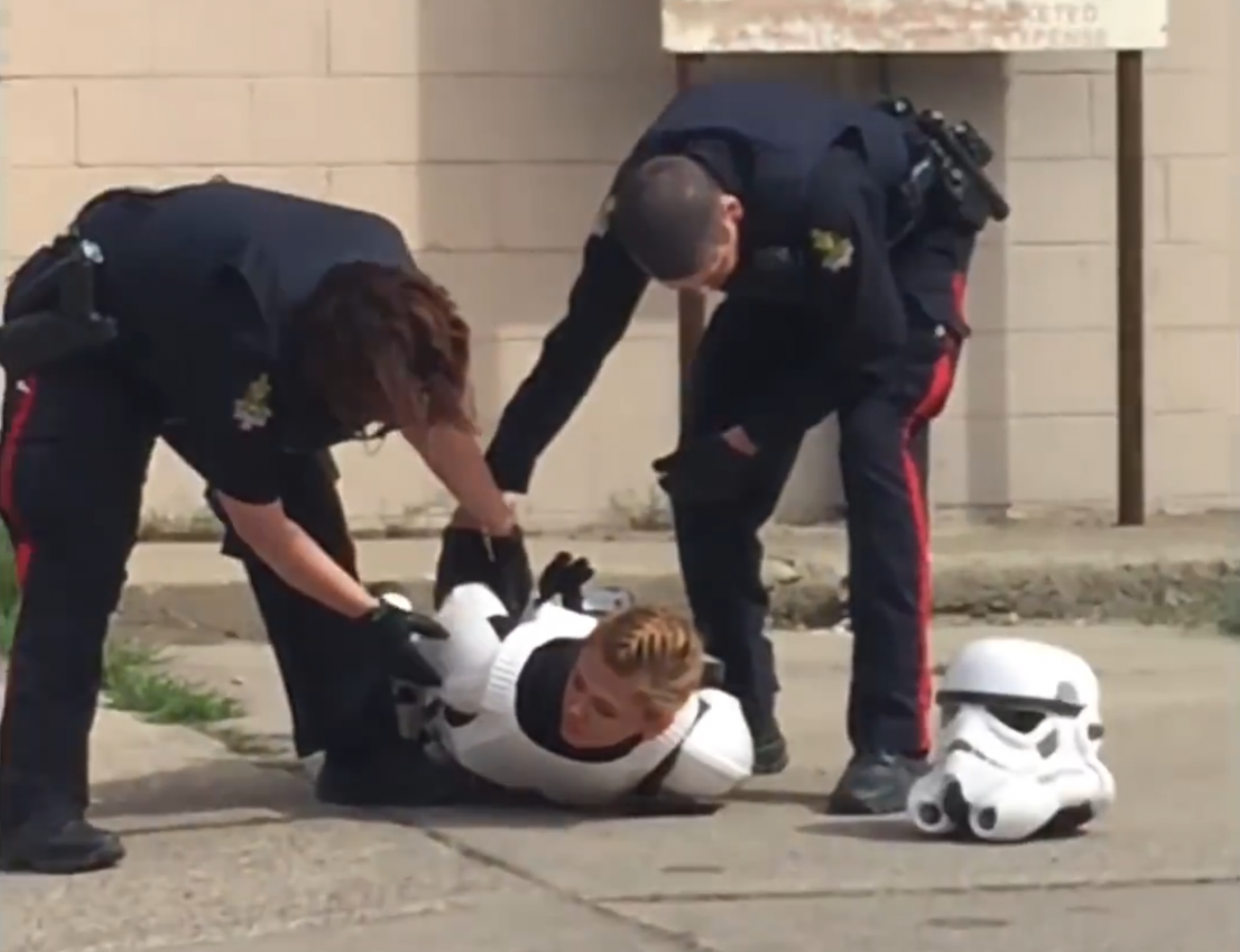 It seems that the populace of Lethbridge, Alberta did not get the memo that May 4th is the traditional celebration of ‘Star Wars‘ Day. After two 911 calls reporting someone in the area with a weapon were received by local police, multiple units were dispatched to find the individual. On arriving at the scene, they found a stormtrooper in full gear (including blaster pistol).

Deciding that this must be the armed and dangerous individual reported in the calls, they take the trooper down with guns drawn. An observer passing by the area recorded the incident even as they were calling out to the police letting them know it was a plastic blaster.

Now, it might have been genuinely a random stormtrooper in a random parking lot, however this particular lot is used by the Coco Vanilla Galactic Cantina (complete with Star Wars, Marvel, Disney, and Funko logos), and blasting Star Wars music out the door. On Star Wars Day.

After the trooper tosses their blaster aside and manages to get on the ground it turned out, the individual they chose to draw weapons on was Ashley, a teenage female who was an employee of the cantina.

In the video the cantina owner can be heard calling to the police that Ashley was no threat and worked for the store, but one of the officers carrying a rifle directs the owner back into his business.

Ashley suffered a bloody nose during the incident when she was taken from the kneeling position she had managed to get into to the ground by the officers (likely from still wearing her helmet then they put her down flat). After cuffing and checking her (for more weapons), the officers can be seen patting down the outside of the armor.

After finally deciding to help her back to her feet and inspecting her BlastTech E-11 blaster to see if it had a live plasma module (spoiler: it didn’t), they released her without pressing charges on the scene. A police spokesman added that the investigation was still ongoing.

Once the video surfaced online, local Police Chief Scott Woods released a statement that he had initiated an investigation under the Alberta Police Act to determine whether the responding officers “acted appropriated within the scope of their training and LPS policies and procedures.”