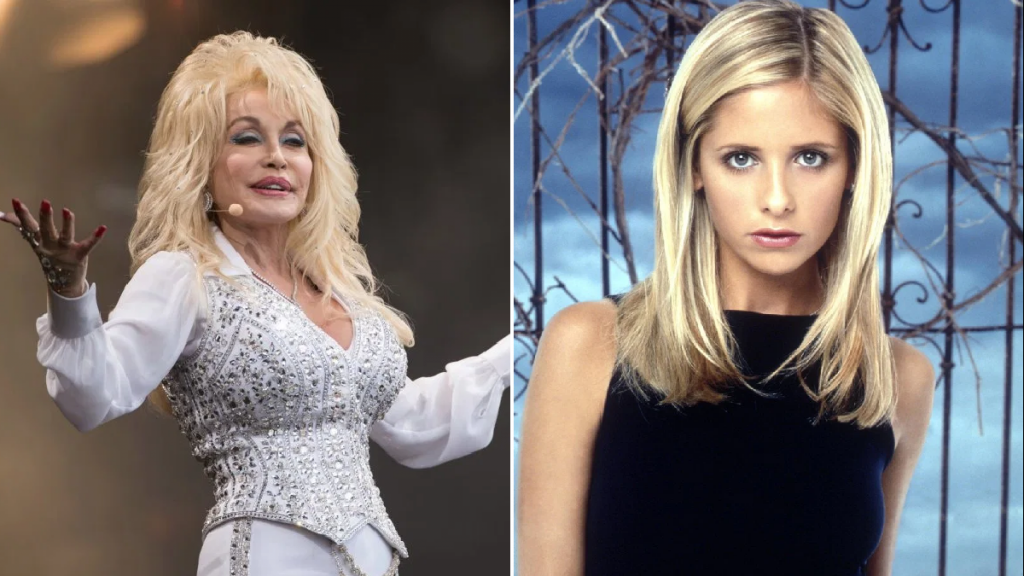 You may be familiar with both of these brilliantly blonde icons. But did you know they had more connecting them then just their hair?

Dolly Parton was not directly credited as a producer on the long-running popular vampire inspired series. Cause obviously, we all would have noticed by now. However a company she co-created and owned was responsible for it coming to television.

Sandollar Entertainment is listed on the end credits of every episode of the show, you can check if you want. This company was created by Parton and her friend/former business partner Sandy Gallin in 1986. It produced a number of films, including Father of the Bride (1991) and Fly Away Home (1996), as well as several Parton projects – most recently her Netflix anthology series: Dolly Parton’s Heartstrings.

Its journey with Buffy began when it produced the original Buffy the Vampire Slayer movie, released in 1992 which did not gain very positive ratings. Gail Berman, who was an executive at Sandollar Entertainment still believed there was potential with our favorite vampire-slaying cheerleader, and proposed launching the concept as a TV series.

Both Berman and Gallin are credited as executive producers on the Buffy series, along with its spin-off series Angel, though Parton herself is not. This does not mean that she didn’t play a fundamental although often forgotten role in bringing Joss Whedon’s creation to the screen.

While it has never been confirmed, some have suggested that the character Buffy Summers’ on-screen birthday (January 19th) is a secret tribute to Parton.

Parton’s involvement seems to have resurfaced and gained a lot of response from fans. You can check out the twitter thread below.

Let us know what you think in the comments!