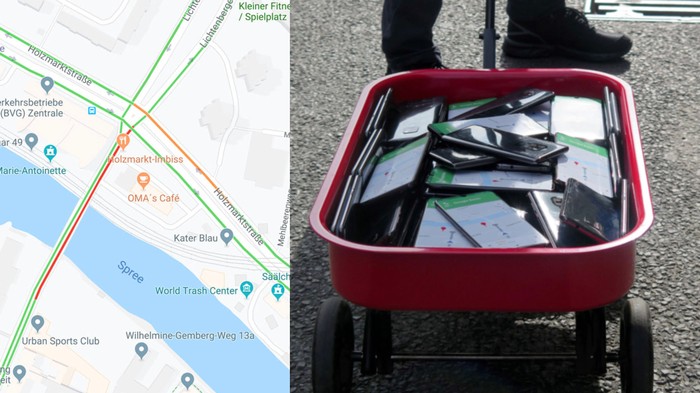 Artist Simon Wreckert made it look like there were numerous traffic jams on google maps by pulling a wagon full of 99 phones down empty streets. He walked around Berlin pulling them behind him and wherever he went the maps would become congested.

When you see a slowdown in traffic the line becomes red, and that is exactly what he was aiming to do. By Google Maps receiving so many signals at one time it tricked the system and made it think that there were slowdowns and stops where there weren’t. Each one of the phones had Google Maps opened up so that was also a contribution as to why Google thought there was an issue.

“By transporting the smartphones in the street I’m able to generate virtual traffic which will navigate cars on another route,” Wreckert told Motherboard in a Twitter DM. “Ironically that can generate a real traffic jam somewhere else in the city.”

In order to pull this stunt off he rented those 99 phones and purchased 99 sim cards online. He would spend an hour or two in each spot. He did this in order to bring attention to the space we pay attention to. “Isn’t it crazy [how] much space is used by a car in a city compared to the usage?” he said. “The hack shows us what is possible with this technology and who we rely on.”