Betty White was born in Oak Park, Illinois on January 17, 1922. She has a career that spans over 75 years and is one of the most popular actresses to this day. She won most of our hearts playing Rose on Golden Girls, but she has done so much more than just that.

She was the first woman to win an Emmy for “Outstanding Game Show Host” in 1983. She won for her show “Just Men!” which aired from January 3 – April 1 1983. She’s won eight Emmys over her career along with a Grammy award.

Betty is part of several animal groups and loves them dearly. She was even made an honorary forest ranger by the USDA forest service in 2010.

She’s the spirit animal to most humans as two of her favorite things are vodka and hot dogs.

We hope you have many more years on this Earth Betty, thank you for being a friend.

These Donkey Kong Inspired Shelves Are A Must Have 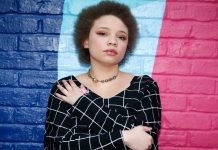