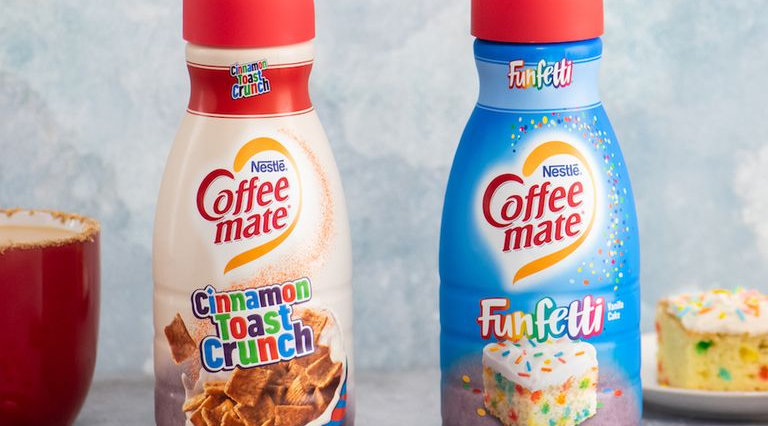 Back in November I had written about Coffee Mate about to release the Cinnamon Toast Crunch and Funfetti flavors. As you may recall they were supposed to be set to release this month in January. Well I had periodically checked my local Stater Brothers to see if they had been stocked yet and wouldn’t you know it last week I was able to get my hands on both of them.

Yep the second I saw them I was like FINALLY. So over the next week I was able to try my coffee with these flavors. The description when reported stated: The Cinnamon Toast Crunch creamer is designed to taste like the spicy and sweet milk that the classic cereal leaves behind in your bowl. It has cinnamon, brown sugar, and hints of toasted cereal so it tastes like “cinnamilk.” And, Funfetti creamer which has notes of vanilla, cake batter, and a “sweet finish reminiscent of frosting.”

And here’s my take on them. Cinnamon Toast Crunch, well I do get the hints of the cinnamon. But I don’t really get that sweet milk cinnamon flavor that was being promised. And the Funfetti, well, it was tasty. No I’m not mad at either of these. I can honestly see why people would be drawn to these flavors. But I was expecting more of a wow factor versus a dull factor.

Overall I would give it a solid 6.5 out of 10 Stars. but don’t take my word for it, if you see it I highly suggest trying it because I guarantee you won’t be mad at them. They are tasty, don’t get me wrong.